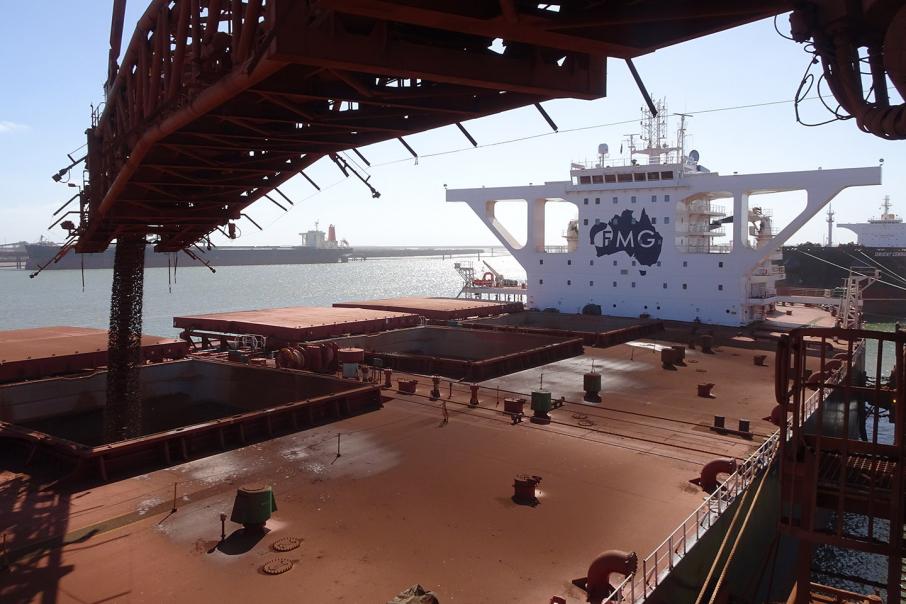 Fortescue has been approved to lift throughput to 210mtpa.

A narrow channel out of Port Hedland’s port supports a substantial amount of Australia’s trade, with 546 million tonnes of iron ore shipped in the 2021 financial year.

The iron ore exports through the docks were worth more than $100 billion in the year to June 2021, with an average price of about $US150 per tonne (cost and freight).

Now the state’s iron ore miners are battling to squeeze even more tonnes through the port.

That is quite a contrast to a decade ago.

Back then, there were concerns the inner harbour at Port Hedland could not move the planned increase in tonnages by the big miners, with about 199mt passing through Port Hedland’s berths in 2011.

BHP had been considering constructing a $20 billion outer harbour to overcome that challenge.

Instead, technology improvements, optimisation and smaller capital investments have lifted capacity, which is now rated for about 617mtpa.

It could be lifted to as much as 700mtpa, Pilbara Ports Authority chief executive Roger Johnston has previously told Business News.

Mineral Resources and Hancock Prospecting are both hoping to build new berths in the inner harbour’s South West Creek, while BHP and Fortescue Metals Group have been angling for bigger export licences elsewhere in the port.

“In line with our strategy to deliver growth through investment in significant projects, including the Iron Bridge magnetite project, Fortescue has been granted approval to increase the material handling capacity at our Herb Elliott Port facility from 175 million tonnes to 210 million tonnes per annum on a staged basis,” Ms Gaines said.

BHP received environmental approval to lift tonnages through the port from 290mtpa to 330mtpa in early September.

Hancock is the major shareholder of Roy Hill Holdings, which has been working to lift exports from 55mtpa to 65mtpa. It owns Atlas Iron, which has also used the port.

South West Creek will be a development option for Atlas and Mineral Resources, potentially unlocking some big projects.

Mineral Resources, ranked fifth on the Public Companies Resources list, hopes to use South West Creek to unlock the Marillana and Ophthalmia projects in a joint venture with Brockman Mining in the Pilbara.

Mineral Resources chief executive Chris Ellison told investors in an August briefing that a decision by the state government would probably be released in the following month or two.

“South West Creek (is) basically awaiting the government to announce what the channel and port allocations are for the inner harbour,” he said.

The company could seek to ship at least 25mtpa and as much as 50mtpa through the berths.

In April, MinRes announced it would spend $105 million on early works for the transport corridor and port area, in anticipation of a 42-month process to develop the projects.

Further west at Ashburton, MinRes hopes to build a 30mtpa export operation, for production through Bungaroo South and Kumina in the west Pilbara, expected in 2023.

When the company acquired Atlas Iron in 2018, the federal Takeovers Panel noted Atlas would come with rights at the South West Creek terminal, which it held through a 63 per cent of entity North West Infrastructure.

Hancock, Fortescue and MinRes had all competed in that takeover battle.

But bidders faced frustration when the state government said those rights were no longer held by NWI and the berths were reserved for junior miners.

Atlas also came with potential mining projects, such as the Sanjiv Ridge project stage 2, which is moving through environmental approval processes.

That will extend the Corunna Downs mine and could produce 3mtpa.

In 2009, Atlas estimated one billion tonnes of reserves at Ridley, while a 2010 Senate submission suggested the development would cost almost $3 billion.

Whatever the strategy, it hinges on a decision by the state government.

When asked if there was an update on the state government’s position on South West Creek, a spokesperson said it was not finalised.

“A review of the Port Development Plan for the Port of Port Hedland has been undertaken and discussions are ongoing between the Pilbara Port Authority and proponents about future allocations,” the spokesperson said.

The Pilbara Ports Authority’s annual report makes no mention of South West Creek but does say capital works have been under way at the Lumsden Point General Cargo Facility, and for a tug haven at Nelson Point.