Homepage plugs into the network

THE usual response when a business offers something for nothing is incredulity. 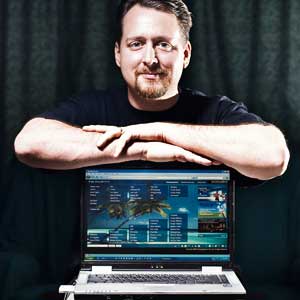 THE usual response when a business offers something for nothing is incredulity. "There is plenty of scepticism around," HomepageHome Pty Ltd founder Paul Flanders says of his uniquely designed webpage.

HomepageHome web portal is available to businesses and individuals to store and organise their favourite website links.

By using the site as the default homepage in a company's browser, businesses are able to access their favourite or most used websites quickly.

Mr Flanders, who operates the small business from home, invented the webportal 12 years ago when he was a university student.

In 2005, the entrepreneur inherited a sum of money when his uncle died, which he used to start up the company.

The first website was launched in October 2006 but after two years only 12 members had signed up, despite being charged just $20 a year for membership.

"At the end of 2007 I decided to refinance the mortgage and got another website design company to re-build my website from scratch," Mr Flanders said.

"They were so impressed by my web portal that they asked me if they could become a minor business partner.

"They see that the web portal has enormous potential, and they are making sure that it runs bug-free, and does what it's supposed to."

In July 2008 Mr Flanders launched the second version as a completely free web tool and, in just nine months, HomepageHome has signed up hundreds of members

But while the site remains free, Mr Flanders has struggled to convince potential clients that the web portal will not only save them time and money, but will also promote their business at no cost.

"I tell them to give it a go because it's free; they've got nothing to lose by trying it," Mr Flanders told WA Business News.

"I recommend to businesses that they try it for one month, and if they don't like it after that then they can simply logout and not use it again.

"Every new business who signs up receives 1,000 advertising credits upfront, so their worst case scenario is that they'll get about six months worth of free advertising - not a bad outcome at all."

The advertising credits provide worth to the business for being on the website, allowing them to quantify exposure by page views and clicks.

Businesses can increase the number of advertising credits they earn by referring the site to other companies.

If those companies sign up upon the referral, they then generate advertising credits for the referring business as well.

Every member whose account is referred down-line from the original business will be generating advertising credits for that business.

Despite the business proposition, HomepageHome has struggled to build a strong customer base.

"The biggest issue that my company has faced in its short life so far has been funding," Mr Flanders said.

"I want to continue to provide these services to my members for free, and generate revenue in other ways such as Google AdSense for Search, larger advertising banners, and that sort of thing.

"With a membership base in the thousands, my chances of making a living from this alone would certainly increase and I could afford to build the features that more and more members are asking for.

"I want to keep my members happy and demonstrate to them that I am proactive and that I listen to them. The longer I take to implement their ideas, the worse my reputation will become."

Constrained by a lack of funds, Mr Flanders has set out to promote his business by attending business association meetings, speaking at IT and webportal forums, running webportal workshops, and by word-of-mouth advertising.

"Without the funds required I cannot afford to get any of these ideas built, so my company grows slowly, with no money to promote it," Mr Flanders said.

"Networking has been great, because it's people helping people."