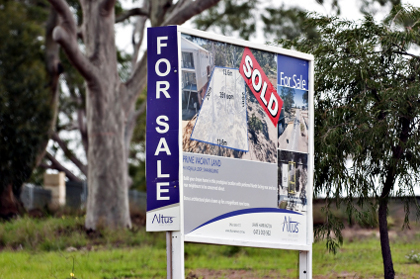 Perth home values recorded a modest rise in October, as house prices fell across most of Australia for the first time in four months.

The latest RP Data-Rismark Home Values Index, released this morning, found that house prices nationwide were down one per cent in October, but on a quarterly basis there was a 0.5 per cent rise in prices for the eight capital cities.

Perth and Darwin were the only capital cities to record a rise in prices in October, gaining 0.4 per cent and 4.0 per cent, respectively.

Hobart had the heaviest fall, losing 4.5 per cent, and Adelaide was the next, with a 2.4 per cent fall.

Sydney and Brisbane both recorded 0.9 per cent price falls in the month and Melbourne fell 1.1 per cent.

RP Data research director Tim Lawless said it was unclear whether the October figure was just a blip on the path to recovery or a sign of further weakness in the housing market.

"Other indicators are suggesting the market has gathered some strength, with auction clearance rates holding firm around the 60 per cent mark across the two major auction markets (Sydney and Melbourne) and owner occupier housing finance numbers showing steady improvements," Mr Lawless said.

"Despite the cash rate being only 25 basis points higher than the emergency lows seen in 2009, we are yet to see a real improvement in consumer confidence or housing market transaction volumes."