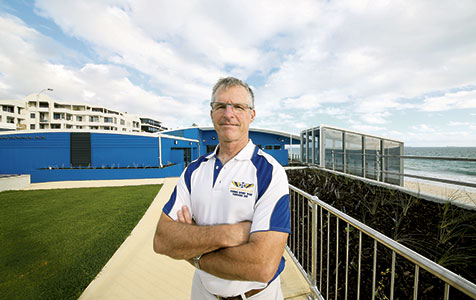 North Cottesloe Surf Life Saving Club has moved into its expanded building on Marine Parade, which is designed to accommodate its growing membership.

The $3.5 million development has taken 10 months to complete and will offer a range of improvements to its facilities.

North Cottesloe's president of seven years, Craig Smith-Gander, said the club was now capable of catering for all its members.

The improved facilities include an expanded gym, change rooms, first-aid rooms and equipment storage areas as well as a commercial kitchen and bar that Mr Smith-Gander hopes will become a social hub for members.

The club would also house one of the units of the Wesfarmers Emergency Response Team, increasing its response time to emergencies and enabling the club to conduct surf rescue operations in a more professional manner, Mr Smith-Gander said.

The club's vice president and chair of assets, Brett Endersby, who headed the building program, said some elements of Cottesloe's town council had been difficult to deal with.

"I felt like they treated us like we were a commercial entity wanting to build a hotel on the beach" he said.

But both Messrs Endersby and Smith-Gander said that some councillors, and in particular mayor Kevin Morgan, had been very supportive of the project.

Despite the difficulties, the club has undertaken approximately $250,000 worth of work improving the public area around the building as part of its development, including providing disabled access to the beach, beautifying the public area and revitalising the dunes with native vegetation.

Mr Smith-Gander said the project was supported by Premier Colin Barnett, the member for Cottesloe.

He also made special mention of BGC's Len Buckeridge, whose contributions to the construction of the club reduced the cost of the project by $1 million.

The club is aiming to expand its presence, undertaking a joint venture with Scouts Australia to build a new $3 million community facility on the site of the old scout hut on the corner of Charles and streets. The project is set for completion early next year.

The completion of the club's construction also marks the end of Messrs Smith-Gander and Endersby's roles in running the club, with both planning to step down soon.

"We all had a view five years ago when we decided to go down this path that we were going to stay the course. It's been delivered now so we're happy to pass the reins on," Mr Smith-Gander said.