Alternative construction techniques are gathering momentum in Western Australia, but not all builders are convinced that double brick’s dominance is about to end. 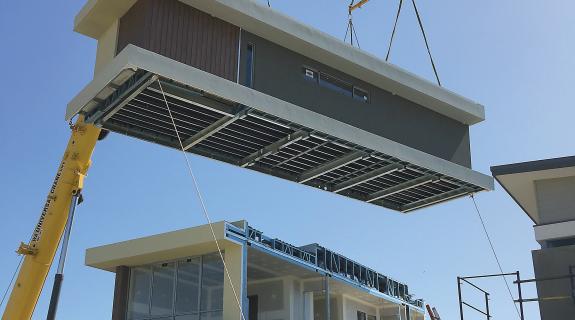 Alternative construction techniques are gathering momentum in Western Australia, but not all builders are convinced that double brick’s dominance is about to end.

The move to new methods has been driven on two fronts – by developers looking for a cost-effective solution for blocks where it is difficult to build traditional brick homes, and consumers seeking time savings to increase affordability.

“It’s exciting that not only consumers, but some of the builders are being prepared to trial steel- and timber-framed housing, even brick veneer housing, more than they have in the past,” Mr McLean said.

“Double brick will remain the major form of construction for our lifetime, but it’s always healthy to have competition in the market, that’s why I’m encouraged by modular housing as well.”

Summit Homes Group has committed strongly to new techniques, setting up a manufacturing facility in Myaree to explore modular and steel-framed construction.

The facility builds complete new homes and also second-storey pods, which can be added to existing dwellings, in some cases in just two weeks.

Summit new homes general manager Tony Harvie said the group had been approached by a number of developers looking for lightweight builds on difficult blocks since the facility was established.

“We generally build on A-class, sandy sites, but Perth is running out of sandy soil,” Mr Harvie told Business News.

“The developers have to bring in $30,000 worth of sand to make them A-class, so they are coming to us and asking if we can build lightweight construction.”

Another builder pushing modular builds is McGrath Homes, which has been using the techniques in WA since the 1960s, predominantly for single dwellings.

Last week, McGrath Homes unveiled a new prototype that can be used for low, mid and high-rise construction, up to 25 storeys.

Its new technique is designed to reduce on-site construction time by up to 50 per cent, providing a 20 per cent cost saving.

But Mr McLean said there was a particular challenge with modular building becoming more prolific – valuation for finance purposes.

“Valuers aren’t recognising the value in modular housing, which is very disappointing,” he said.

“A lot of the providers are very frustrated with values not stacking up in order to get approvals for finance.”

Mr Alcock acknowledged the time saving involved with modular building, but said the costs of construction were largely in line with traditional double brick techniques.

“The traditional forms of construction are that way for a particular reason,” he said.

“That is, the trades know how to construct with them, they are available at a sufficient volume and at a competitive price, so the overall market skews to that being what is the predominant outcome.”

But Mr Alcock did say ABN Group was willing to consider traditional techniques like brick veneer, which had been proved in other locations.

“We know it and understand it and the materials are all supplied by our regular manufacturers and suppliers so there are no warranty issues, but it is about understanding how the cost equation of that will work on a repeat basis,” Mr Alcock said.