AUCTIONING homes is emerging as a popular vehicle for cash-strapped not-for-profit organisations to raise much needed funds. 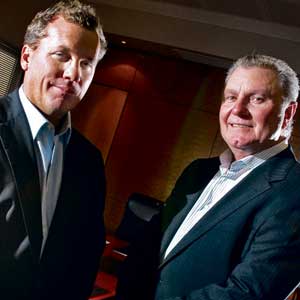 Terry Evans and Scott Park of Redink Homes hope the auctioning of a home in Mandurah will provide Youth Focus with much needed funds.

AUCTIONING homes is emerging as a popular vehicle for cash-strapped not-for-profit organisations to raise much needed funds.

While Telethon has been doing it for over 20 years, organisations such as Youth Focus, Red Cross and the West Coast Eagles have taken on such projects in recent times as a way of injecting cash into dwindling charity coffers.

Burswood-based Youth Focus, which is committed to the prevention of suicide, depression and self harm in people aged 12 to 18 years, is set to auction its second home in two years after successfully raising almost $200,000 on the 2006 sale of a house built by Scott Park Homes.

Terry Evans, who has had a long affiliation with Youth Focus through a previous advertising role, recently joined Osborne Park-based Redink as the company's branch marketing director.

He said home auctions had become "part of the matrix of raising money" in the not-for-profit sector.

"The charity home is something that's concrete, and I don't mean that as a pun, but it's a tangible thing that stands there forever as a positive sign of things," he told WA Business News.

The Youth Focus charity house was developed around the concept of 'youth helping youth', providing an opportunity for apprentices to become involved in the building process.

Redink Homes, established by Mr Scott Park, is financing the project until the house is sold in February 2009 and Perth-based property group Mirvac donated the land in Meadow Springs, Mandurah.

However, while the likes of Telethon and Youth Focus have successfully raised hundreds of thousands of dollars through home auctions, the Red Cross believes more traditional methods of fundraising are a safer option.

The Red Cross charity home, constructed by Broadway Homes and sold by auction on April 5 in the new Ashley Rise Estate in Tapping, was the first time the organisation had embarked on such a fundraising project.

"While we received a result that we were happy with, our experience with the process precludes me from commenting further," she said.

"While I can't envisage that Red Cross will undertake another charity home project in the next couple of years, we would certainly look at it again in the future if the conditions were favourable."

The block that the Southern River home was constructed on was donated by Bletchley Park developer Wallis Property, with builder In-Vogue Living constructing the two-storey home.

"It's a very competitive field out there and there are different challenges for different charities," he told WA Business News.

"The challenge is you have to marry the developer, builder and sales agent together in order to extract the best possible value for the charity."