Holmes a Court, Perron at odds over art

Art Gallery of WA chair Janet Holmes a Court has gone head to head with Perron Group over the planned relocation of an artwork in the foyer of the Central Park office tower. 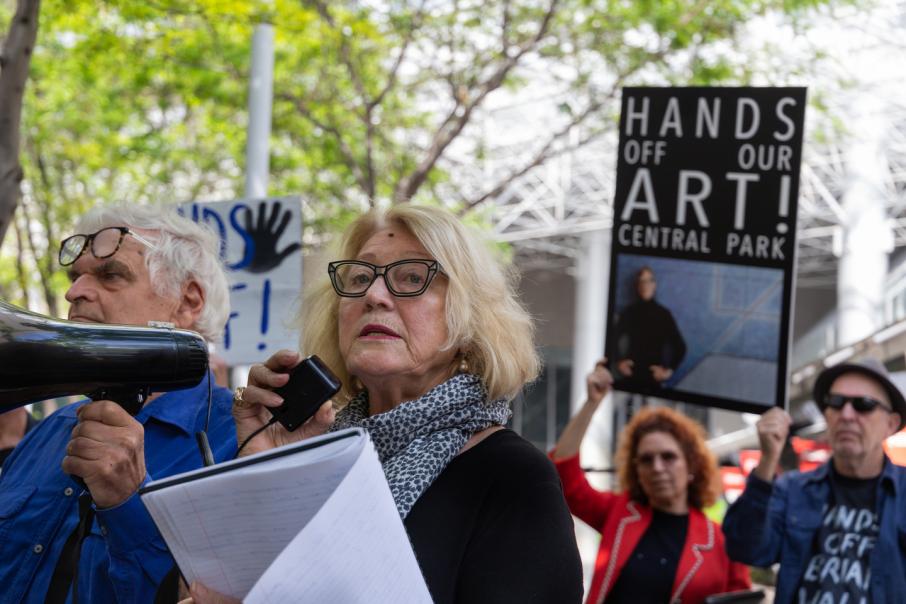 Janet Holmes a Court told protestors that moving the artwork would cause damage.

Art Gallery of WA chair Janet Holmes a Court has gone head to head with Perron Group over the planned relocation of an artwork in the foyer of the Central Park office tower.

A founding member of the Perth Institute of Contemporary Art, artist Brian McKay created the integrated artwork in 1992.

Mrs Holmes a Court led a protest at Central Park today during which she said Mitsubishi Chemical Corporation, the maker of the panels the murals were etched on, had provided technical advice that the panels could not be removed without damage to the artwork.

The Perron and Frasers plan for a foyer coffee shop requires four 5.2 metre high by 3.9 metre wide panels to be taken down and relocated.

Following Mr McKay’s death in 2014, it has been unclear whether moving the works would cause them damage, given the exact initial assembly is now unknown.

A statement released by the Perron Group said the works would only be slightly moved, and that engineering, construction, and artwork experts had been consulted.

A Perron representative was unable to share the companies or individuals that were consulted, but told Business News the group was confident the artworks could be safely relocated without disturbance to their structural or visual integrity.

Mrs Holmes a Court told the rally Mr McKay's legacy should not be destroyed for the sake of a cup of coffee.

“We have talked to the owners for six months – and they are not listening,” Mrs Holmes a Court said.

“Perth has lost too much of its public art and we need to protect our cultural heritage.

“Brian McKay was at the forefront of contemporary Australian art for five decades – and he was my friend.

“The murals in the Central Park foyer are considered his masterpiece.

“It has always been considered to be safe from commercial compromise because it is the state’s eminent private commission in a corporate foyer.

“Sadly, that community trust and belief is about to be shattered by the building’s owners.”