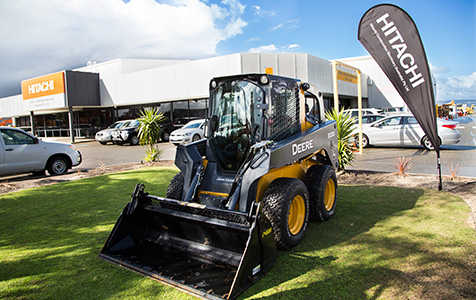 NEW DIGS: Hitachi is moving from its facilities in Welshpool (pictured) to a new site to be developed at the Forrestdale business park in the Armadale area. Picture: Attila Csaszar.

Mining and construction equipment provider Hitachi will develop a $100 million facility at Forrestdale business park, providing a boost for several other commercial developments in the Armadale area.

Hitachi announced today it would relocate to the business park 30 kilometres south of Perth and develop a state-of-the-art facility for 350 employees.

Hitachi managing director David Harvey said the Armadale facility was the company’s most significant investment in infrastructure in Australia and would enable the company to expand its support capabilities.

Hitachi is a major supplier to the mining industry, providing equipment to Rio Tinto, Fortescue Metals Group and BHP Billiton.

It also supplies equipment to customers in quarry, construction, forestry and recycling industries and is the exclusive distributor of Hitachi, Bell and John Deere products in Australia.

Hitachi’s development will include a mining assembly facility for mining trucks and excavators, a re-manufacturing workshop, a paint booth, wash bay area, a caustic wash and soda blast station, a parts distribution centre, a machine workshop and a training facility.

Planning Minister John Day said Hitachi was the first company to buy land in Forrestdale business park on the west side of the Tonkin Highway, which divides the park into a west side and the more developed eastern side, after it secured a 10-hectare site for about $10 million.

The business park is located about 30 kilometres south of Perth CBD between the Tonkin Highway, Armadale Road and Ranford Road and offers highway access to Perth airport, Fremantle Port and Kwinana.

Mr Day said Hitachi’s decision to move from its facility in Welshpool, which it had outgrown, had further stimulated plans for the business park to eventually accommodate 700 industrial lots with the potential for 12,000 private sector workers to be based in the area.

“Hitachi’s decision is a real win for the Armadale area and its economic future,” Mr Day said.

“It has generated a forward momentum, with a number of associated businesses already expressing an interest in co-locating with Hitachi, and in discussions with landowners.”

Mr Day said the business park, which included more than 300 hectares of commercial and industrial land, was poised to also attract nearby residential development, adding to the recent start of construction of 150 new homes in Wungong, Champion Lakes and Seville Grove.

Real estate agencies Colliers International and Savills Australia, which are selling a 19ha site within Forrestdale East business park owned by Alcock Brown-Neaves Group, said the park had excellent access to other major industrial areas and was destined to become an efficient and highly functional commercial and industrial estate.

Business News understands that the ABN Group sale, which includes two large lots of 8ha each and 10 small lots, said the site had an asking price of about $160 per square metre, totalling about $30 million.

Supermarket group ALDI is believed to be looking at the ABN site along Ranford Road as a potential location for a new distribution centre and grocery store.

Hardware chains Masters and Bunnings, which both opened stores in quick succession in 2012, operate on Ranford Road.

In the past three years, about 40 factories have set up at Forrestdale business park and in the past 12 months the Metropolitan Redevelopment Authority has approved more than 170 planning applications worth $70 million for the Armadale and Wungong redevelopment areas.

Construction of Hitachi’s facility is expected to start in April next year and be completed by June 2015.

Mr Harvey said Hitachi had built a partnership with the MRA and the Armadale City Council to develop infrastructure at the business park, for which it had received a high level of support.