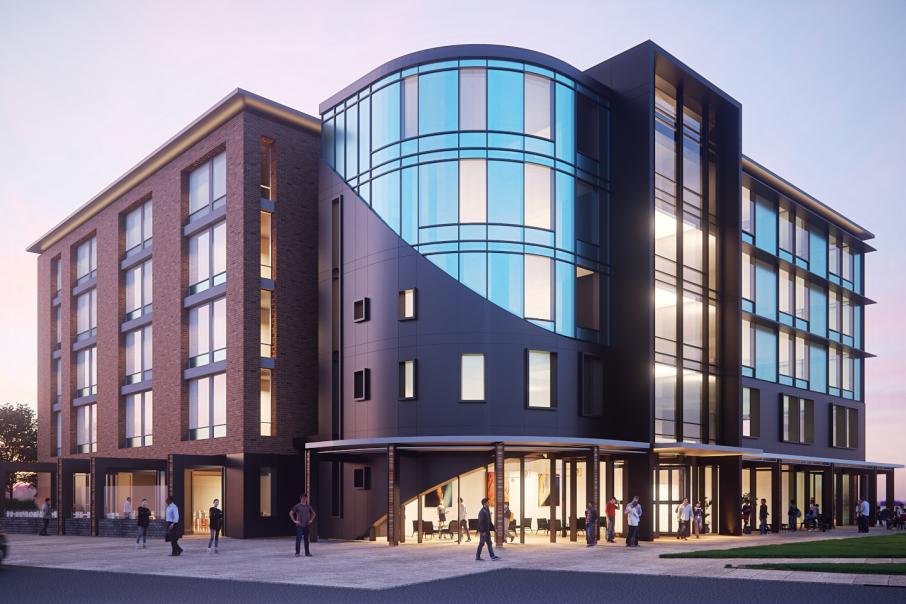 Hilton Garden Inn Albany's exterior finishes are designed to blend in with its natural surroundings.

Hilton Garden Inn Albany will be located adjacent to the Albany Entertainment Centre on the city’s waterfront and is expected to open towards the end of next year.

Construction contractor Pindan is carrying out the works on behalf of Albany-based landowner Paul Lionetti, who has been active in the city’s business sector for 41 years, including owning and operating two IGA supermarkets and the Due South hotel, which is located close to the Garden Inn site.

Mr Lionetti purchased the site from the state government in 2016 for $1.5 million, according to CoreLogic’s RP Data, however, the proposal had been in the works several years prior.

“Six years in the making, we are pleased to announce that the agreement with Hilton has been successfully negotiated and we are working towards a target open date of October 2020,” Mr Lionetti said.

“There is nothing like this in Albany and this new Hilton Garden Inn will provide a new stunning accommodation option on the Albany waterfront.”

The Albany hotel will add to Hilton’s portfolio of 27 operating and 11 under-development properties in Australasia, which includes the Parmelia Hilton Perth hotel in Perth’s CBD and the recently completed DoubleTree by Hilton Northbridge.

The project is also the latest major progress in a decades-long effort by the state government to rejuvenate and revitalise Albany’s waterfront precinct.

In 2010, the $70 million Albany Entertainment Centre was opened, while the government has been seeking a suitable development partner to build a high-quality hotel operation at the nearby Middleton Beach since Albany’s former Esplanade Hotel was demolished in 2007.

Its latest effort to find a partner came up fruitless, with Planning Minister Rita Saffioti saying in September last year that an expressions of interest process had not produced a suitable concept.

At the time, Ms Saffioti said the government, the City of Albany and LandCorp would continue to work closely on new strategies to attract a developer.