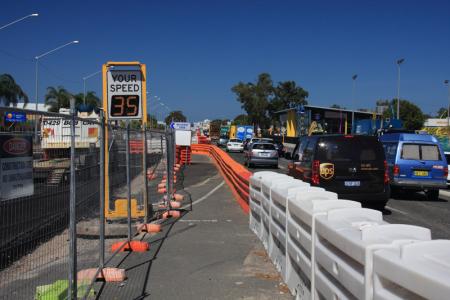 Perth’s Great Eastern Highway Upgrade has claimed a national environmental award despite an asbestos scare which halted the project in 2012.

The project, which included an expansion from Kooyong Road to Tonkin Highway, won the Civil Contractors Federation National Earth Award at a Melbourne ceremony on Saturday night.

The $350 million widening of Perth's major transport route to its domestic and international airports was completed in April this year - well ahead of its target date of December 2013 - and has eased traffic congestion by installing two extra lanes on the 4.2-kilometre strip, from Kooying Road in Rivervale to the Tonkin Highway in Redcliffe.

It was the first time that recycled asphalt pavement has been used in Western Australia, which was highlighted by the judges as a characteristic which earned it the Earth Award.

However, it was also that which forced part of the project to be put on hold in May last year at the request of Transport Minister Troy Buswell. Mr Buswell said there was concern asbestors fibres were present in the recycled road base supplied by Capital Recycling - a concern which was later laid to rest through stringent testing.

The scare also prompted the introduction of stringent protocols for the waste industry around its handling of materials to erradicate asbestos contamination.

The other contenders in category 5 (for projects worth more than $75 million) were the Pacific Highway Kempsey Bypass (NSW), the Midland Highway Brighton Bypass (Tasmania), the Peninsula Link Freeway (Victoria), the Pacific Motorway Upgrade Section B (Queensland) and the Seaford rail extension (South Australia).

Civil Contractors Federation WA chief executive Jeff Miller said the category 5 award was always going to be difficult to win with such high-profile competition from other states.

"Our WA judges described the upgrade as a 'truly remarkable' project and the national judges clearly agreed," Mr Miller said.

"Winning is a great achievement and the City East Alliance is to be congratulated for the excellence of their work on the upgrade."

The CCF Earth Awards are Australia's longest-running and most prestigious awards for infrastructure project excellence, with 2013 marking the 20th presentation of the awards.