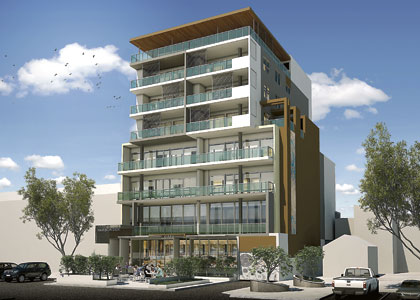 NEW ERA: Kiama Holdings’ Harborside will be a mixed-use high-rise development on the Geraldton foreshore.

PLANS are well under way for construction of Geraldton’s first high-rise apartments following the recent completion of the city’s foreshore redevelopment.

The eight-storey tower will be located in what is currently the squash courts and car park of the Geraldton Club, which will become the first-floor tenant of the new tower. There will be a restaurant on the ground floor, four office suites over two levels, and 10 apartments, including a penthouse on the seventh level.

“We have all the approvals in place, so we will just get the sales together and commence construction towards the end of the first quarter of next year,” Kiama Holdings managing director Richard Patterson told WA Business News.

Mr Patterson said Geraldton had been lacking high-quality residential development and that there was significant demand for the apartments.

“There hasn’t been any prime oceanfront land available until the redevelopment of the town foreshore and putting in a loop rail system out the back of the town, which has substantially changed the entire face of Geraldton,” he said.

Kiama is no stranger to the Geraldton, having completed The Moorings apartments in the Batavia Marina in August 2010 and also redeveloped Champion House, a commercial building in the CBD.

Local developer Humfrey Land Developments is progressing with its plans to build more high-rise in the foreshore precinct.

Humfrey is currently working on designs for three eight-storey towers and a four-storey building facing Marine Terrace on an 8,800 square metre site purchased from the Public Transport Authority in early 2011.

“It’s pretty much an iconic site and it needs something there that is going to make Geraldton stand out,” managing director Barry Humfrey said.

In addition to office, retail and residential space, the development will feature a 200-room hotel to cater for the city’s overstretched accommodation market, which Mr Humfrey said frequently resulted in hotels being booked out.

The growing population of Geraldton is driving the need for more services and retail facilities, while offices are in demand as a number of professional services companies establish branches there to serve the growing mining industry.

“We’ve been dealing up here for over six years now, and I have never seen the town busier,” Mr Patterson said.

Retail development is also pushing ahead, with the Centro Stirlings shopping centre and Chapman Arcade mall to start redevelopment works soon. New shopping centres are also being built in some of the suburban estates surrounding the city.

Mr Humfrey said there was scope for more retail development.

The City of Greater Geraldton is also moving ahead with plans to build a technology park at the airport. Tenders for the construction of the first stage and for the development of a hotel in the park closed recently.

The Durack Institute of Technology has recently committed to building a resource sector training centre at the park, which is planned to be ready at the beginning of 2014.

Despite the new developments, Crothers Construction managing director David Crothers said commercial construction in the region had been feeling the pressure of the overall slowdown in building

“The industry is the most competitive that it has been in my working life,” Mr Crothers said, adding that Perth-based builders were also targeting the region.

Although busy with their own developments, both Mr Patterson and Mr Humfrey believe more developments will be needed to absorb the growth expected in the city.

Already there has been a noticeable impact from Gindalbie Metals’ gian Karara iron ore project. Mount Gibson Iron has also been expanding. The recent announcement of the Square Kilometre Array project to be built in the region may also put pressure on the city, regardless of when the Oakajee Port and Rail project goes ahead.

“If Oakajee was to actually kick-off now it would place the town under a fair bit of stress,” Mr Patterson said.

Mr Humfrey added that while there was land available with the right zoning for development, the lack of available finance for new developments was a major issue for smaller developers.

“We do need people who can come in that can develop and deliver product that Geraldton needs very badly,” he said.