Hiddlestone grows through the power of connections

Subiaco-based Hiddlestone Electrics has taken an old-school approach to business during its 100 years. 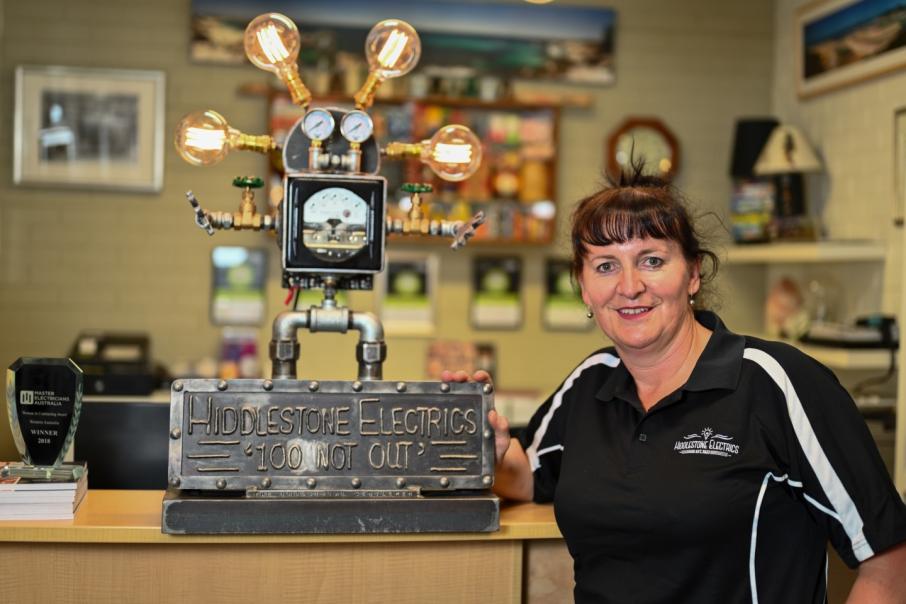 Household use of electricity was still something of a novelty in Perth when the business that has become Hiddlestone Electrics started out in 1920.

Less than 30 years earlier, the city had installed its first electric-powered streetlight, with electrification slowly making its way into households and businesses across Perth by the turn of the 20th century.

Captivated by the world’s latest invention, a 22-yearold Howard Hiddlestone, not long home after serving in WWI, sought to harness this new utility.

As it transpired, there were plenty of opportunities for the new business, such that Hiddlestone Electrics is still at work a century later, after navigating the Great Depression, WWII, and a raft of technological evolutions.

In 2020, the fundamental nature of the Hiddlestone business has remained much the same as 100 years earlier, while adapting to a changing market: providing electrical services and maintenance, wiring, repairs and fittings, from a base in Subiaco.

The leadership has also undergone a transformation in line with social changes, headed now by its first female managing director, Natalie Hiddlestone, the great niece of Howard.

The third-generation family business estimates it has serviced more than 80 per cent of houses in and around the municipality of Subiaco, as well as many local businesses, with large-scale commercial projects over the years including the Regal Theatre and Northam Airport.

Besides electrics, the Hiddlestone dynasty has played a significant role in supporting and shaping the Subiaco community, services recognised with a namesake laneway just off Rokeby Road.

It’s this loyalty to Subiaco, along with an unwavering commitment to its ethos of providing ‘good, reliable service’, that Ms Hiddlestone points to as reasons for the company’s longevity.

“Honesty is at the forefront, as is reliability … and we’re personable.

“That’s why we get so much repeat work.”

The business held a centennial celebration last month, commemorated with the launch of a book, 100 Not Out: Celebrating a Century of Service, by Ross Addison.

“We’re one of the oldest continuing businesses in Subi,” Ms Hiddlestone said.

Switching on As documented in Mr Addison’s book, Howard Hiddlestone started out pre-war as a technician with the Postmaster-General’s Department (a federal government department established in 1901 governing postal and telegraphic services).

He opened his own business, H Hiddlestone Electrics, at 141 Rokeby Road in 1920, becoming a qualified electrician. Soon after, brothers Cecil (Ms Hiddlestone’s grandfather) and Albert joined the business, which was renamed Hiddlestone Bros.

Howard was reportedly easy to spot on his bicycle travelling between jobs, pedalling up and down Rokeby Road and Hay Street with coils of wire wrapped around the handlebars and a wooden stepladder strapped to the crossbar or resting over one shoulder.

During those early days, Hiddlestone Bros sold a range of car batteries and tyres, and offered trading and repair services, as well as electrical wiring.

With the entrance of larger automotive players, the business shifted focus to electrical services, building up a loyal client base with a mix of commercial, residential and industrial work.

While the Great Depression crippled many businesses, Hiddlestone Bros survived, albeit pared down to two brothers after Howard left for a salaried job.

But perseverance paid off for Cecil and Albert.

Whether it was connecting electrical appliances in homes or supplying power for electrical machinery on factory floors, Hiddlestone Bros quickly re-established its reputation for service.

At the outbreak of war in Europe in 1939, the company pivoted to assist with the effort, which included winning the wiring and electricals contract for the switchboard responsible for the guns and associated infrastructure at Kingstown Barracks on Rottnest Island.

But Cecil had more things than work on his mind, welcoming the birth of his and his wife’s first child, Vernon, in 1940.

Legacy building Ms Hiddlestone said she and her father, Vernon, shared an entrepreneurial streak from an early age.

Initially, they also shared a lack of interest in leading the family business, although in both cases that was to change.

For Vernon, that journey began when he started an electrical apprenticeship to join his father and, by the late 1960s, with Cecil the only founding brother left in the business, the company became Hiddlestone Electrics and relocated to a larger space at 85 Rokeby Road, Subiaco.

The name Hiddlestone Bros was retained for the family’s property interests; a portfolio that includes 83-85 Rokeby Road.

“Once a week he’d take the dog and walk to the banks. He’d pop his head into businesses … they’d remember that face-to-face [interaction] … so when anyone needed an electrician, they’d think of him.”

Growing up, Ms Hiddlestone would work in the family’s retail outlet on weekends, which became known to many as ‘Aladdin’s Cave’, selling anything from kettles, toasters and clocks, to giftware teapots and quirky gadgets.

During the 1980s the business ramped-up its local impact, supporting associations and sports clubs, receiving a Rotary award for its service to the community in 1990.

Vernon also ran for public office, serving as a Subiaco city councillor from 1999 until 2003.

“And good at pioneering, he helped put the power lines underground when Subi went from overground to underground.”

Ms Hiddlestone joined the business full time in 2002, with the premises shifting to Townshend Road in Subiaco soon after.

When Vernon passed away in 2014 there were only daughters to continue the legacy, but Ms Hiddlestone said the family dynasty was never at risk.

Proud of her association with the Hiddlestone name, she kept it after marriage.

“I had big shoes to fill … I’m not an electrician, I just did my C-class,” she said.

In 2017, Ms Hiddlestone was named a finalist for the Master Electricians Australia ‘Women in Contracting Award’.

In the years since taking over, she has brought the business up to speed in the digital age, creating a website, a formal business plan and replacing her father’s paper-based invoicing process with 21st century systems.

“When dad passed away, we had 450 email addresses in our database; now we’ve got over 2,000,” Ms Hiddlestone said.

“But we still don’t really advertise … people don’t find us by Google ads or search engines; it’s still all word of mouth.”

Next steps Over its lifespan, the business has employed and signed off more than 40 completed electrical apprenticeships.

This year, the business hired its first female apprentice.

“The biggest milestone for me is our resolve to just be constant and steady,” Ms Hiddlestone said.

“I don’t have any aspirations to grow the company interstate or even into Wanneroo or down to Fremantle.”

Mementos of the family’s Aladdin’s Cave now line the walls and ceilings of the office, a collection Ms Hiddlestone hopes to display when she opens an ‘Electric Café’ in the near future.

A director of Hiddlestone Bros, Ms Hiddlestone said discussions were under way with the City of Subiaco and Curtin University for the use of the latter’s properties for business startups.

Technology was another area of growth, with the advancement of smart technology-based apps enabling homeowners to control their electricity with a tap rather than the flick of a switch.

Ms Hiddlestone hopes one of her two teenage sons will take the reins in the years to come.

“I haven’t really thought about it too deeply; I’ve got years left,” she said.

“Dad was 74 when he passed away and he was still working 10 plus hours a day.

“Dad would say, ‘If you can find a job that you like and get paid for it, then it’s not work.’ That’s what it was like for him.