Hesperia, in partnership with Birchmead Property Group, has acquired Lot 118 within the Murdoch Health and Knowledge Precinct, to deliver approximately 120 residential apartments. 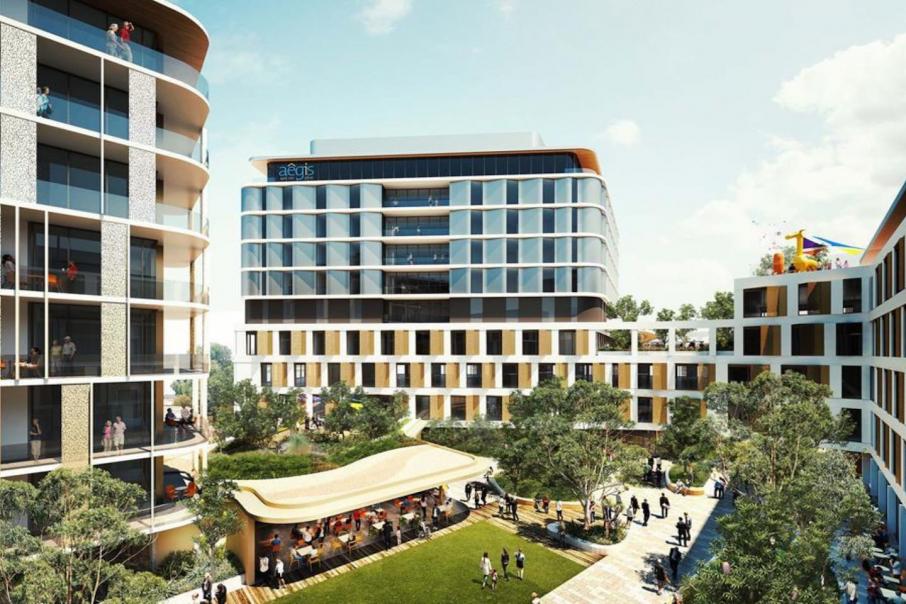 Subject to approval, construction on the apartment development component is expected to start late 2021. Image: Hesperia

Hesperia, in partnership with Birchmead Property Group, has acquired Lot 118 within the Murdoch Health and Knowledge Precinct, to deliver approximately 120 residential apartments.

Hesperia (formerly Fini Group) is the master developer for DevelopmentWA’s 9.6-hectare Murdoch Health and Knowledge Precinct, which will house the state’s first medihotel.

Hesperia and Birchmead have previously partnered on an earlier stage of the precinct, with Stage 1A initially earmarked for more than 100 apartments.

Earlier this year, a revised development application led by Hesperia outlined plans to change the composition of the project, with other media reports claiming the group had slashed apartment dwellings from its project as a reflection of broader market conditions.

However, Hesperia director Kyle Jeavons said plans for that site were revised to accommodate higher-than-expected demand for health and medical property stock.

“It’s just that the demand for the medical and health-related, and commercial products, was higher than we had originally anticipated.”

Hesperia and Birchmead plan to construct a 10-storey building on the 3,438 square metre lot, with the almost 17,000sqm floor area of the property to feature approximately 120 apartments and commercial space.

“We had always been very motivated to pick up other sites in the precinct and fortunately we were successful in acquiring this one,” Mr Jeavons said.

“So basically the apartments that were in Stage 1A have been moved here and will actually be delivered in a similar timeframe.

“From a precinct perspective, it's a fantastic outcome and actually just reinforces the growth of the area and certainly what will be a terrific town centre when completed.”

Subject to approval, construction on the 10-storey development is expected to start late 2021.

Lot 118 will be in proximity to two of Western Australia’s largest tertiary hospitals, Fiona Stanley and St John of God Murdoch, and will be located close to Murdoch University, the Harry Perkins Institute of Medical Research, and South MetropolitanTAFE.

The Murdoch Health and Knowledge Precinct is considered to be the catalyst for the delivery of a broader Murdoch Activity Centre, expected to support 35,000 jobs, 22,000 residents, and facilities for up to 44,000 students when completed.

Previously, overall project value for the Murdoch Health and Knowledge Precinct had been estimated at $200 million, but Mr Jeavons said considering the project scope had expanded on many fronts, that number had likely climbed to more than $400 million.

“We are very bullish about the demand that will be there for residential product,” he said.

“As a town centre, its got significant infrastructure spending ... from the two hospitals, the university and the tafe, and at this point in time, within five kilometres of the town centre there really isn't anywhere that you can live in a ‘lock up and leave’ apartment product.

“You'll also have aboout 9,000 employees within 500 metres of this town centre.”

Birchmead head of property Joe Sanfilippo said both parties were looking forward to partnering and bringing their collective expertise to the Lot 118 development, as they had done on other projects.

"Birchmead is excited to be associated with the precinct projects in particular as these play a significant role in community development and improved lifestyle choices," he said.

"The Lot 118 proposed development will provide future residents with the ability to live within very close proximity of the broader Murdoch Activity Centre and extensive public transport infrastructure.”

Plans for Stage 1A were recently granted development approval and include an 80-bed medihotel, residential, commercial, medical, aged care, and office facilities, with the overall aim to deliver a better experience for recuperating patients and to free-up hospital beds so more patients can be treated.

Lands Minister Ben Wyatt said the latest acquisition by Hesperia and Birchmead demonstrated the confidence held by developers in the Murdoch Health and Knowledge Precinct.

“With Hesperia set to begin construction on Stage 1A this year, the planned development on Lot 118 will create more local jobs and is another important step in bringing this world-class precinct to life,” Mr Wyatt said.

Member for Jandakot Yaz Mubarakai said the precinct would open up many career opportunities for the community.

“It is incredibly exciting for all of us to see new milestones reached in this project,” he said.

“Australia’s and WA’s world-class research and educational facilities are what brought me here as an international student in 1997.

“The Murdoch Health and Knowledge Precinct will help our state build on our already exemplary reputation as a world leader in education and research.”