Improving outcomes for others has been a driving force in Michael Henderson’s professional and personal life. 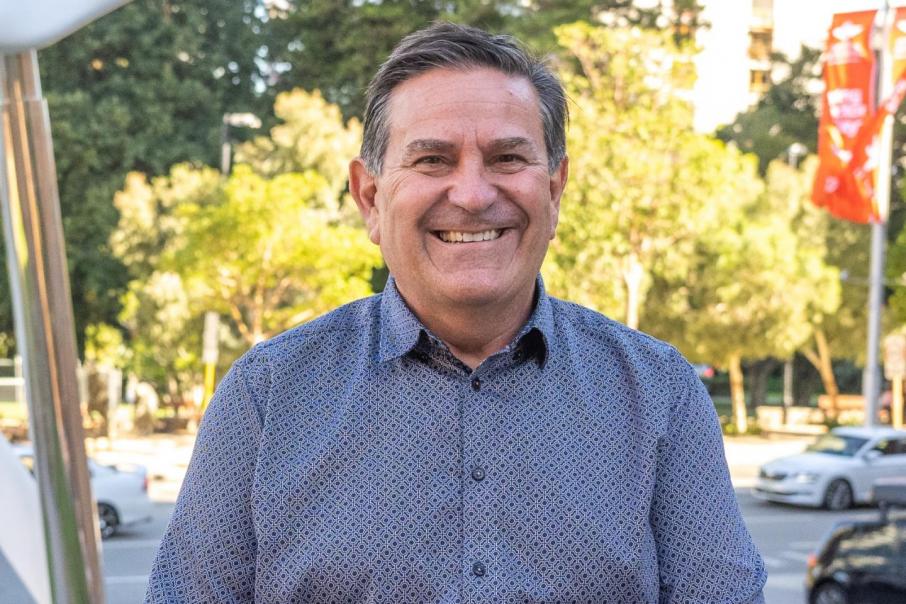 It’s difficult to provide the full breadth of Michael Henderson’s eclectic professional and personal interests in a paragraph or two.

Suffice to say his work across sectors has been recognised, again, with a third nomination for Western Australian of the Year, this time under the ‘professions’ category.

He’s currently Hockey WA president, has a seat on the board of the West Australian Ballet, and chairs B&C Pharmaceuticals, to name a few roles.

He told Business News the trigger for ETS was his own experience of almost losing an eye.

On Easter Saturday, about six years ago, Mr Henderson was hit in the face by a snapped towrope, with his best option to phone an on-call nursing station for immediate treatment.

They were able to connect with an ophthalmologist, however, who was on holiday.

Thankfully, through a connection with the ophthalmologist on Skype, the nursing staff was able to save Mr Henderson’s vision (although he said the details were too graphic to share).

“I walked away from that thinking there was a better way to deliver a high-fidelity clinical specialist service within Western Australia, nationally or internationally,” Mr Henderson said.

In 2015, he brought together close friends and fellows of the Australasian College of Emergency Medicine (FACEM) to form Emergency Triage Services.

They include Aled Williams, a specialist emergency physician at Peel Health Campus in Mandurah, and David Mountain, a clinical associate professor at Sir Charles Gairdner Hospital.

“They are the specialists of all specialties; they’re the ones who save life and limb,” Mr Henderson said, noting a similarity to services received in emergency departments.

He said ETS now contracted directly with clients rather than using a third-party model, which escalated the communication process between injured persons and specialists.

It works by connecting a FACEM immediately with the injured person and the nurse, general practitioner, or paramedic assisting.

In one example, ETS helped to save the life of an injured mine site worker by guiding paramedics in draining the worker’s pleural cavity to allow one of his lungs to expand.

“Their [the paramedics] view was that if they hadn’t had us sitting on their shoulder guiding them, the individual would’ve perished,” Mr Henderson said.

“We provide a really unique remote capability that no-one else is able to do.

“The number of trauma doctors, or FACEM, that we’ve got sets us aside from any other organisation operating internationally.”

ETS is not Mr Henderson’s first medical and health venture. 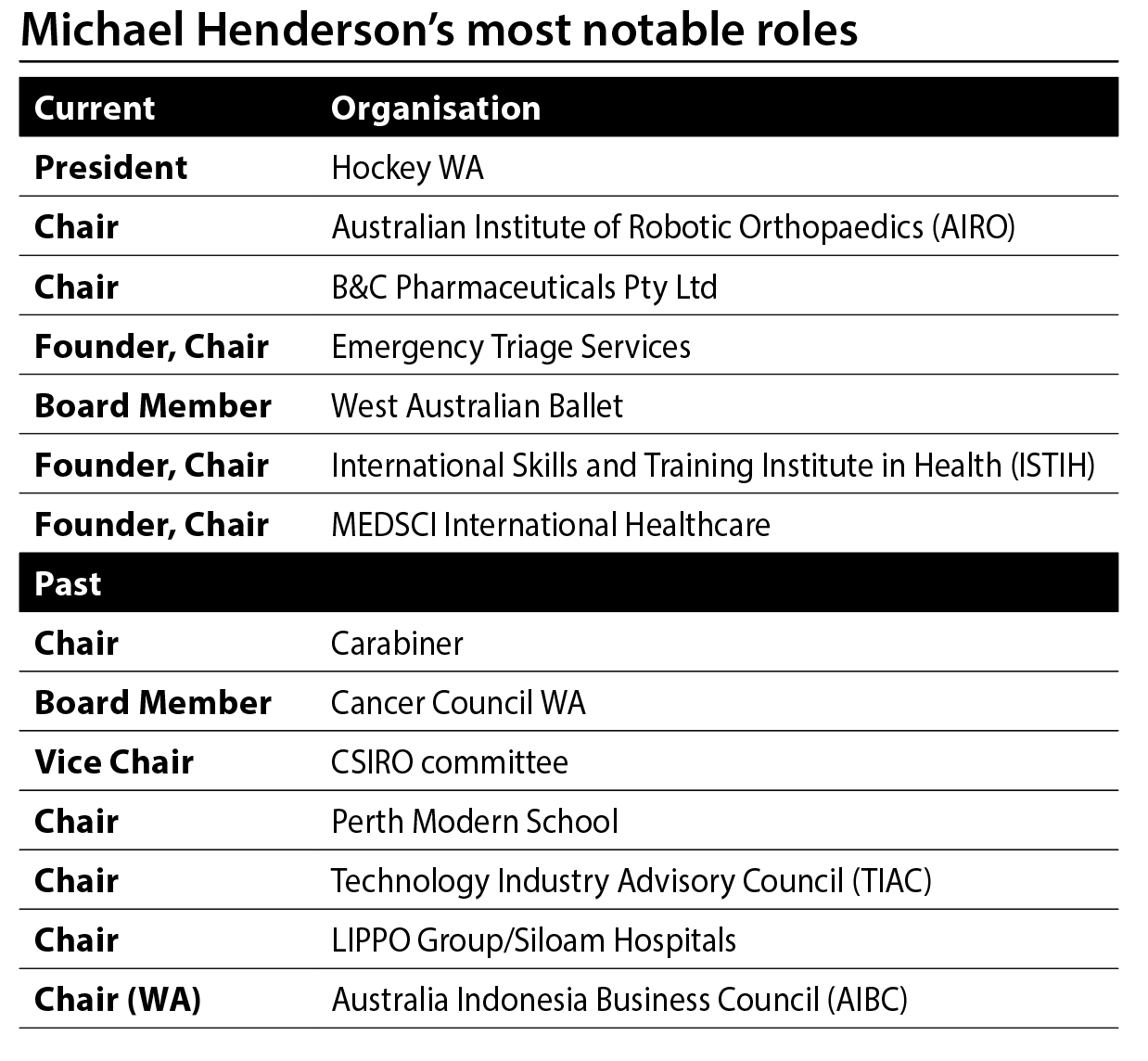 As far back as the 1980s, he saw that people in Asia and parts of Australia would often seek out health care from the US, believing it superior to that in Australia.

“In the early days, I used to try and influence people, particularly colleagues in Asia that I would meet with, to seek their healthcare in Australia … because I was confident that we had similar, if not better in some areas, health services,” Mr Henderson said.

“That led me to try to understand why, for instance, in Bali you would have six-star resorts with a bidet in the bathroom and yet there was minus one-star in healthcare.”

On a trip to Indonesia in the late 1980s, Mr Henderson met with a prince from one of Bali’s four royal families, the Agung family, who helped him get behind the scenes at Sanglah General Hospital in Denpasar.

The prince’s father, Ide Anak Agung Gde Agung (the King of Bali), was suffering from prostate cancer at the time.

The Mayo Clinic in the US had refused to treat Mr Agung any further, saying he had less than one month to live.

“I indicated to the youngest prince that if his father ever needed help, we could provide an equal service in WA because we collaborate with the Mayo,” Mr Henderson said.

“Some months later, I got a phone call. The king was really sick, the Mayo didn’t want him to travel, they didn’t think he would survive. What could I do to help?

“So, I made arrangements for one of the top neurologists and a number of other specialists to come together.”

Mr Agung was brought to Perth, where he received further treatment. He lived for a further three and a half years.

“All of a sudden, I started getting contacted by heads of state and others to help them with their health care,” Mr Henderson said.

“I did it philanthropically, I wasn’t interested in doing it as a commercial opportunity.”

“So, I brought together a group of friends … to help me create what became ISTIH, the International Skills and Training Institute of Health.”

Mr Henderson co-founded the not for profit in 2005, in the same year he received his first nomination for Western Australian of the Year (under the ‘citizen’ NFP category).

One of ISTIH’s earliest projects was assisting health care workers in the aftermath of the 2004 Boxing Day Tsunami, which struck the Indonesian coast of Sumatra and killed more than 240,000 people.

“For me, the value was having one doctor training 10 doctors, and each of those doctors training another 10 doctors, it was like dropping a pebble in a pond,” Mr Henderson told Business News.

“That scale has just grown exponentially.”

Elsewhere, Mr Henderson suggested he would maintain a connection with the West Australian Ballet when his role on the board, which he joined in 2019, ends.

“I’m still passionate about the ballet,” Mr Henderson said, adding he would continue to support the organisation by assisting injured dancers through ETS.

Carabiner, which he chaired between 1996 and 2021, also assisted the ballet with pro-bono architectural services for the redevelopment of its Maylands facility.

Some of the firm’s other pro-bono projects include the revamp of the North Cottesloe Surf Club and the University of Indonesia Health Campus.

Carabiner was established as Sandover Pinder in 1995, following the merger of Sandover Architects and Pinder & Partners.

The business changed its name to Carabiner in mid-2018.

In April this year, Mr Henderson sold his stake in the firm to long-time business partners David Karotkin and Peter Giangiulo. 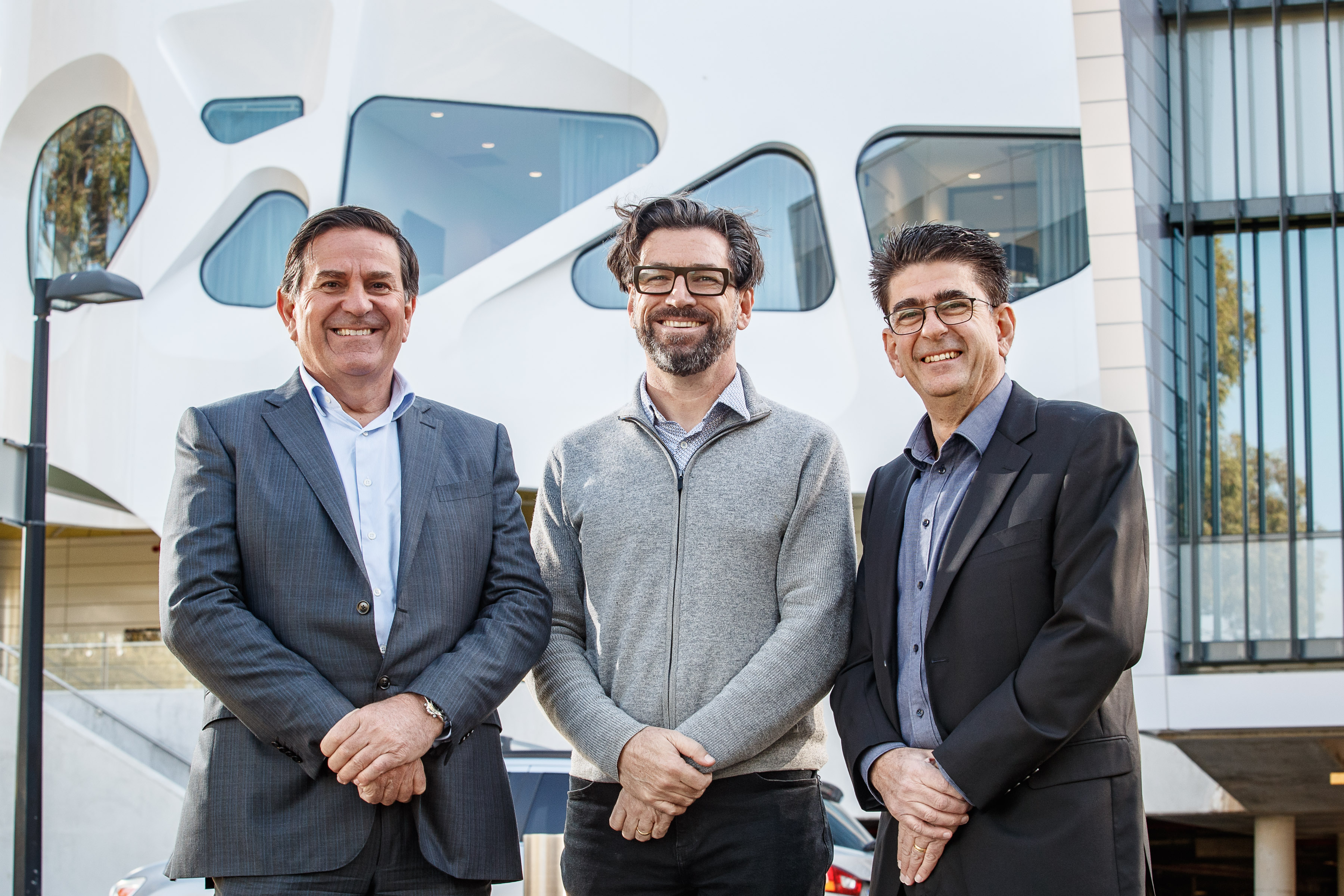 Mr Karotkin has led the company as managing director since its inception, while Mr Giangiulo has been a director.

On his decision to leave the company, Mr Henderson told Business News his pursuits had always been innovation and health.

He said a second reason was to ensure there was no conflict of interest with respect to his role at Hockey WA.

Mr Henderson is understood to be working to ensure Hockey WA and its facilities remain competitive with other sporting codes.

That includes forming an international centre of excellence to improve links with industry, government, and international hockey federations.

“Hockey is my passion, as is motor sport,” Mr Henderson said.

“I’ve been a formula racing car champion in WA for more than a decade.

“I haven’t raced for the last year and a bit, mainly because of my commitment to hockey in the short to medium term to deliver an international centre of excellence that will see us engaged in the region and Australia becoming the focal point globally in hockey. Unfortunately, we’ve lost that focus.

“The Dutch were very clever in how they built infrastructure and created programs and leveraged themselves out of the top 10 to number one in the world.

“I would like to see Australia back at number one, both men’s and women’s [hockey].

“We’ve got the individuals to be able to do it, we’ve got some of the best hockey players, we just need facilities and programs that will underpin and give them the best chance of winning gold.”

“Not many people have seen who the powerbrokers of hockey are,” he said.

“What we’ve been doing is bringing many of those people back into the focus and creating the opportunities that will see growth.

“We’ve put a large piece of turf under our building on Hay Street in the city, where we’re starting to bring people in who used to play hockey, get a hockey stick back in their hand, and build that profile again.”

Mr Henderson said Hockey WA had also bolstered its board, including with the recent appointment of chief executive and former WA Super boss, Fabian Ross.

He said the goal for ETS was to grow the business internationally. That would involve further developing ETS’s technology, to be deployed to clients.

“I have a very close network of people who do things; most of them sail under the radar, but what they achieve is phenomenal,” Mr Henderson said.

“I see the next iteration of technology as being pivotal in our [ETS] competencies, so artificial intelligence and the ability to create a more active environment where we can deliver a virtual trauma doctor as part of the incident.”

Mr Henderson said his family, friends and networks were most important to him.

“I had amazing peers in my life who showed me the difference between commerce and making a living, and giving to the community,” he said.

“That’s why a very large part of me is very active in helping other people with no return to me.”

Mr Henderson has also held numerous academic roles, including as a current professorial fellow at UWA’s Faculty of Medicine, Dentistry and Health Sciences and as an honorary fellow at Edith Cowan University.

“When you look at my background, I’ve always been an entrepreneur,” Mr Henderson said.

“I’ve been someone who’s been very capable of bringing disparate parts together and creating opportunities.”

He attributed his success across a range of fields to an entrepreneurial mindset, which is evidenced by the fact he has been nominated for Western Australian of the Year in three different categories.

In 2015, he was selected as a finalist under the ‘business’ category.

The 2021 Western Australian of the Year event will be held on June 4, at Crown Perth.