Design work is nearly complete for the world’s largest trimaran yacht, to be built at the Australian Marine Complex in Perth’s southern suburb of Henderson. 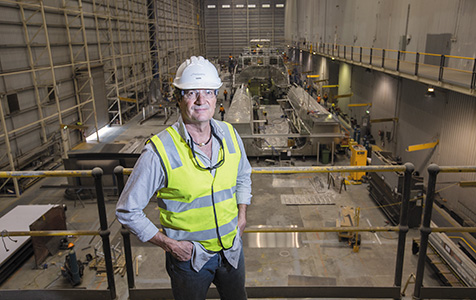 Design work is nearly complete for the world’s largest trimaran yacht, to be built at the Australian Marine Complex in Perth’s southern suburb of Henderson.

The trimaran is the latest in a string of super yachts manufactured in Western Australia.

Echo Yachts director Mark Stothard said the industry was worth a few hundred million dollars to the state’s economy each year.

Echo Yachts was registered this year as a venture of Perth-based Evolution Commercial and wealthy Singaporean businessman Goh Hup Jin to build yachts for the Goh family.

Mr Stothard, who is a director of Evolution Commercial, said Mr Goh respected Australia’s pedigree in the super yacht world.

“One of the reasons Australia is very good at building one-off vessels is that we have the ability to take on sophisticated building projects and design (them),” Mr Stothard told Business News.

“A lot of places like (South) Korea and China are good at producing production line boats… they tend not to be good at one-offs.”

In March 2012, Henderson-based neighbour Hanseatic Marine launched the MY Smeralda, which at 77 metres was the world’s largest luxury aluminium yacht at the time.

The trimaran to be built by Echo Yachts for the Gohs will be 84 metres, making it possibly the most expensive single export ever to come out of Australia, according to the AMC.

Local player Vikal International is also involved in the super yacht industry, producing what are known as ‘tenders’, small transport vessels that provide support to a lead yacht.

The Gohs’ 84-metre aluminium vessel will receive logistical support from a 46-metre fibreglass catamaran, already under construction at Echo Yachts, which will carry up to 12 tenders.

The support vessel will be built by late 2015, while the main trimaran will take three years to completion.

Also boosting the reputation of the local industry is the presence of internationally renowned yacht designer Sam Sorgiovanni.

Austal appears to have steered away from super yachts since, but this year won a contract for construction of two catamaran ferries destined for the Middle East, worth $30 million, and sold a $61.5 million trimaran to Europe’s Condor Ferries.