The state government says the shipping capacity of Port Hedland could increase by 16 per cent to 577 million tonnes, opening up the possibility of further growth in iron ore exports through the existing harbour. 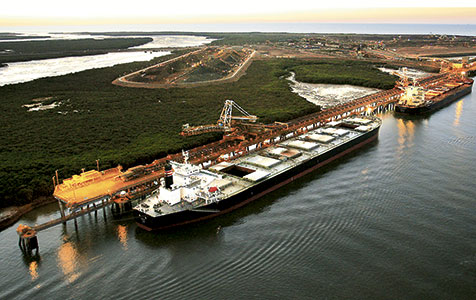 The state government says the shipping capacity of Port Hedland could increase by 16 per cent to 577 million tonnes, opening up the possibility of further growth in iron ore exports through the existing harbour.

The port’s capacity was previously set at 495mt, which compares with throughput of 447mt in the 2014-15 financial year.

The volume of trade through the port is set to reach capacity in about 2017, once the Roy Hill iron ore project ramps up exports.

Roy Hill, which is due to commence exports in coming weeks, plans to export 55mt per year, which would make it the port’s third largest user.

The biggest exporter through Port Hedland is BHP Billiton, which shipped 256mt of iron ore in the past year and is aiming to grow to 270mt in 2016 and 290mtpa "over time".

Fortescue Metals Group is planning to ship about 165mt this year.

Other exporters include Atlas Iron, which is aiming for annual shipments of 14-15mt, and Mineral Resources, which exports about 6mt pa through Hedland.

"The extra capacity is a direct result of port innovations and efficiencies," Mr Nalder said.

He said the modelling could be used to evaluate potential port investments and operating scenarios, maximising throughput at the port.

"The modelling looked at recent operational changes at the port including the use of innovative maritime technology, which has resulted in increased sailing drafts, the shippers' move to larger and more draft efficient vessels, and the port's ability to sail more ships on a tide," Mr Nalder said.

The minister said the annual capacity entitlements for each port user would remain the same, however all users could access extra capacity through the use of D-class shipping protocols.

“Briefings received by Fortescue indicate there is at least the additional capacity available again, constrained only by landside infrastructure and optimisation,” he said.

The study results follow major initiatives by some of the port’s users.

Rivtow has been awarded the contract to operate the 14 tugs in addition to the four tugs it currently operates in the port and will now operate BHP Billiton’s entire towage fleet in Port Hedland.

“Construction on a new tug harbour at Hunt Point will commence shortly and we have purchased six new tugs which will join the fleet in the coming 12 months,” he said.

“We have also developed additional training for tugboat operators such as the Tug master advanced training programs and we have added four Advanced Rotor Tugs and moorings.”

The mining giant plans to spend $US240 million ($A326 million) constructing the new eight-pen tug harbour at Hunt Point and buying the six additional tugs.

Mr Wilson said the project would mitigate the risk of a channel blockage by ensuring the continued safe escort of vessels in and out of the inner harbour.

Meanwhile, Mineral Resources is pursuing plans to developer a multi-user transhipping operation out of Port Hedland.

The company believes this would be more efficient than using the existing facilities at Utah Point, which the government is seeking to privatise.

MnRes has been critical of shipping charges at Hedland.