CURRENCY fluctuations during the past 13 months have made tough economic times a nd difficult trading conditions even more so, but experts suggest there are ways to combat the turbulence. 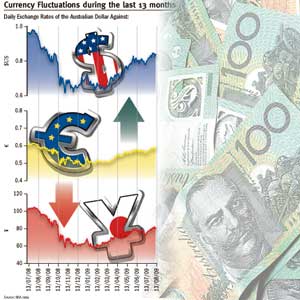 Currency Fluctuations during the last 13 Months

CURRENCY fluctuations during the past 13 months have made tough economic times a nd difficult trading conditions even more so, but experts suggest there are ways to combat the turbulence.

Since mid-2008, the value of the Australian dollar against the US dollar, the euro and the yen has moved about sharply.

At that stage there was a strong feeling among traders, financial experts and even some economists that parity with the US dollar was a certainty.

However, just more than three months later the exchange rate had fallen to US61.9 cents amid the world's collapsing markets, led by the sub-prime crisis in the US.

It then hovered between US61 cents and US72 cents until May of this year as global economies came to grips with the economic downturn.

Last week it was trading at around US83 cents.

Western Australia's valuable trade relationship with Japan, as well as the state's geographic proximity to Asia, means the turbulence of the yen is just as important to many WA trade businesses as the swinging exchange rate with the US dollar.

BankWest chief economist Alan Langford said the massive fluctuations in currency experienced over the past year or so were unprecedented, with no way of predicting where things would head next.

"The level of volatility around that time last year, in September, October, November, which was in the midst of the collapse, was unprecedented since the float of the dollar.

"I always thought I would retire looking at 1986 as the benchmark for volatility in the Australian dollar, but that was busted big time late last year."

Mr Sebastian said it was great news to see Australia's trade deficit shrink in June to just $441 million, but emphasised that trade deficits were well and truly here to stay.

Mr Watson said importers often secured hedging contracts to their own detriment much more than their exporter counterparts.

"It's having a worse effect for our importers in that they can't take advantage of the strengthening Australian dollar as they've already got contracts in place at, for arguments sake, low 70s," he said.

Messrs Langford and Watson agree that hedging to protect income streams is important, but it is best to try and take advantage of natural hedging.

"We always look to customers not hedging their total requirements so you can take advantage of the movements in the marketplace and there are other ways to naturally hedge," Mr Watson said.

"So if you're trading in US dollars on both counter parties, obviously you've got a natural hedge there and also you can take out foreign currency accounts and hold the cash in those until it is in your favour to convert.

"And if you've taken out a forward option rather than a forward contract you do have the opportunity of not taking that option up on each trade, so you can offset the differences by taking some at market and then balancing that out with taking some of the options as well."

And Mr Langford suggested that, if possible, geographic and product diversification is another way to ease the pressure of currency fluctuations.