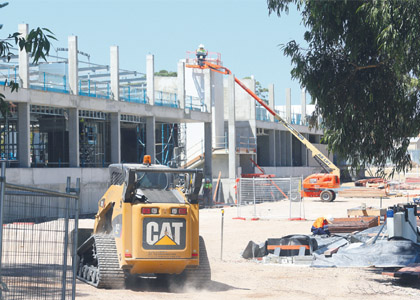 The state’s asset investment program is expected to be worth $7.3 billion in the current financial year, according to the pre-election financial update prepared by Treasury.

That figure is projected to taper off gradually to $6.5 billion in 2015-16, but with Labor and the Liberals both making big spending promises in the election campaign, there is every prospect the actual spending will prove to be higher.

The biggest contributor to the state government’s capital works budget is health spending.

That will decline in future years, as the big projects currently under way are completed.

The Fiona Stanley Hospital, the Joondalup Health Campus expansion and the Albany Health Campus are all due to be completed this year.

Other big projects such as the New Children’s Hospital and Midland Health Campus will stretch into 2015 but there are few projects to take their place.

The largest health project on the drawing boards is the new Karratha hospital, budgeted to cost $207 million.

The new hospital will be built in central Karratha and will replace the Nickol Bay hospital and the Warambie health centre.

Another smaller project on the cards is St John of God Health Care’s plan for a $50 million, 75-bed private hospital at Mandurah.

Electricity infrastructure, roads, water supply, and the hot topic of the election campaign, an expanded rail network, are other big-ticket items in the government’s capital works program.

These areas are being targeted by companies such as John Holland, Brookfield Multiplex, DORIC and Broad, which have built up their engineering construction capability.

For companies that target building construction, education is fruitful territory.

While the state government is the biggest spender on schools infrastructure, private colleges and universities also generate a lot of work.

Pindan, for instance, was recently awarded a $38 million contract for new student accommodation for St Catherine’s College at the UWA campus in Nedlands.

The project comprises the design and construction of 250 new student accommodation rooms and recreation and ancillary facilities, including an outdoor swimming pool, conference room and business centre.

“This coupled with their track record and early commitment to a fixed lump-sum price were the main reasons they were awarded the job,” Mr Pitman said.

Pindan’s other clients in the education sector have included St Brigid’s College and Curtin University, and it has also completed multiple government school projects.

The state has spent $1.4 billion over the past four years and committed an additional $498 million in the current financial year to build 26 new schools and refurbish older schools.

Pindan worked on the largest of these projects - the $63 million redevelopment of Governor Stirling Senior High School.

A similar redevelopment is under way at Applecross Senior High School. Esslemont Cockram has won $44 million worth of work and the government has committed to spend a total of $56 million.

Willetton SHS is also due to undergo a significant upgrade with $32 million allocated in the 2012-13 budget for stage 1, which is due to be complete by 2016.

Construction has started on five new primary schools and a secondary school due to open in 2014.

Planning is due to start soon on another four new primary schools, at Baldivis, Golden Bay, Lakelands and North Broome.