Wide-open spaces, spectacular coastal cliffs and even a spot of golf on the Nullarbor are some of the highlights from the drive across Australia back to Perth. 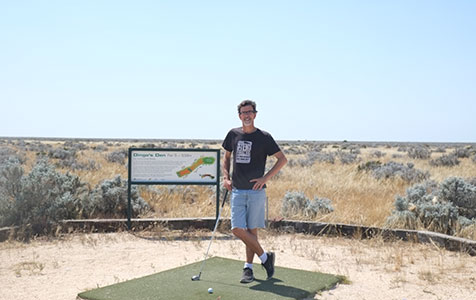 The fifth hole on the 18-hole golf course that starts at Ceduna and ends at Kalgoorlie.

We drove through Adelaide on the Friday before the AFL grand final, stopping off for a quick look around the city and a tour of the new-look Adelaide Oval.

It’s an impressive development, with a few lessons for Perth, which I’ll discuss in an upcoming article.

We enjoyed beautiful camping conditions in the final week.

The weather was good, we had campfires every night and were able to find quiet, isolated spots where we could completely escape the crowds.

The wikicamps app was a big help in finding most of the campsites. What a great service.

Our first night out of Adelaide was just a couple of hours north of the city.

We were on a small ridge that gave us a sweeping view of the farms and roads below.

After the sun had set, we had a great view of the traffic snaking its way through the night. Next morning, we had a clear view of the rising sun.

It’s hard to convey properly in words, but it was a gorgeous spot. It gave us the kind of experience you never get in a caravan park or large campground.

The isolation and the quiet made it special.

The long drive from Port Augusta to Ceduna is pretty dull – lots of wheat fields and not much else to look at.

We dropped into the Ceduna Hotel to catch the grand final.

It was a surprisingly modern pub for a small country town. It has been extensively developed and offers an attractive view of the parkland on the foreshore and the ocean.

The pub had a lively crowd, which made the game very entertaining despite the one-sided scoreboard.

At Nullarbor roadhouse we decided to try out the fifth hole on the 18-hole golf course that starts at Ceduna and ends at Kalgoorlie.

Each roadhouse and town in between has one hole. Dedicated golfers, with lots of time on their hands, can play all 18 holes.

One was enough for us. We hired clubs at the roadhouse, bought some balls, and headed out to the tee.

Not surprisingly, the fairway was heavy going, with lots of tumbleweed and spinifex.

We also had to contend with a dirt airstrip that runs through the fairway. It was a fun novelty and I wish good luck to people planning to tackle all 18 holes.

The tall ocean cliffs along the Nullarbor are the highlight of the crossing.

They are just a few hundred metres from the highway and provide a good spot for whale watching.

We saw a few whales in the distance, but have met travellers who told of seeing dozens of whales swimming near the coast

Our last campsite was Boondie Rock near Coolgardie.

This was a lovely, quiet site well away from the highway, with only two other couples camping there.

We also discovered a reservoir and quarry nearby, with granite slabs from the quarry used to build an impressive water collection system for rainwater running off the rock.

The reservoir and drainage system was apparently developed about 100 years ago to support the trans-Australia railway. It provided a good example of the hard work and the challenges facing settlers in years gone by.

My first impression as we drove back into Perth, was how slowly the traffic moved.

Traffic lights seem to take longer to change, and there were many times when no vehicles or pedestrians were moving, usually because a pedestrian has pressed the button but walked against the red light because they didn’t want to wait for the green walk sign.

Other cities aren’t plagued by this problem – they allow pedestrians to cross against turning traffic. Perth needs more of that.