The WA Planning Commission has moved to address a shortage of large industrial plots in the metropolitan area, seeking to rezone large swaths of rural land in Hazelmere to allow for industry use. 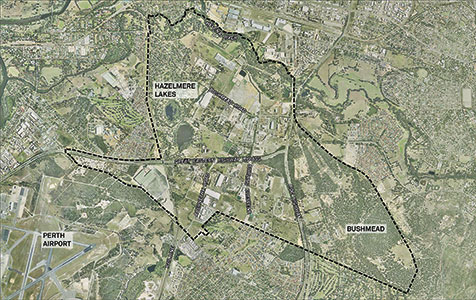 LOCATION: The Hazelmere Enterprise Area has been identified as a potential solution to the shortfall of large industrial plots in the metropolitan area. Photo: WAPC

The WA Planning Commission has moved to address a shortage of large industrial plots in the metropolitan area, seeking to rezone large swaths of rural land in Hazelmere to allow for industry use.

The most significant rezoning proposal is the 75-hectare Hazelmere Enterprise Area (HEA) south precinct, which the WAPC has nominated for general industrial land uses.

A further 34ha near Helena River has been nominated to have its land use changed from rural to industrial urban, which would allow for light industrial or institutional uses such as health, education or research.

Light industrial and residential are also proposed for a 46ha HEA buffer area, located north of Perth Airport and south of the Midland town centre, while the WAPC is also proposing the same land uses for a 43ha buffer zone to the south of the HEA.

The Hazelmere land has historically been used for stocking paddocks and other agricultural activities.

The rezoning proposals are amendments to a draft structure plan for the HEA released in September 2011.

The original structure plan identified Hazelmere as an ideal location for large-scale industrial development due to the suburb’s proximity to Roe Highway and Tonkin Highway.

Challenges developing the Hazelmere area include a lack of infrastructure, particularly poor quality roads and sewer and drainage networks.

However the draft structure plan indicated the larger lots available in the HEA would fill a significant gap in the current industrial land sector.

“Fifteen hectares of zoned industrial land is very, very hard to find, if not impossible, especially in the traditional areas like Welshpool and Kewdale.”

Mr Chorley said demand was so high that the majority of high-value industrial land sales were occurring off-market.

“They’re not going through full marketing campaigns, so you would expect yields to tighten on that basis,” he said.