Hard slog ready to pay off

A unique partnership is slowly transforming life on the open road. 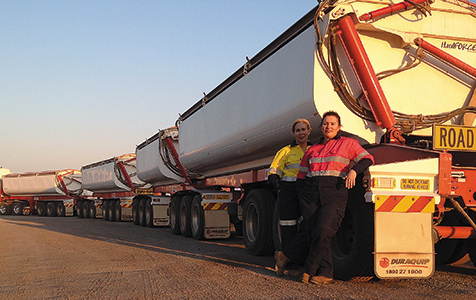 A unique partnership is slowly transforming life on the open road.

It's an unlikely partnership that shatters a range of truckie stereotypes.

Typically, truckies are not known for their subtlety, or for being female, yet transport group owner Heather Jones ticks both those boxes.

And her new joint venture partner, Lyndal Denny, admits she had little time for truckies and no experience behind the big wheel when she led a campaign about dangerous driving heavy goods vehicles on the east coast seven years ago.

Yet together they have formed an initiative to help new drivers get on the road.

Ms Jones, who won a 40under40 award in 2006 for her work as an industry representative and owner of Success Transport, told Business News she first contacted Ms Denny in response to her dob-in-a-dangerous-driver campaign.

“She had been traumatised by reckless truck drivers, nearly run off the road three times ... at the same time I’d been on the west coast lobbying for safer driving and training,” Ms Jones said.

“Just by education and being nice I showed her that truck drivers aren’t all drug taking crazy lunatics that they’re portrayed as in the media, and that without us every single person in society, whether you live in the country or the city, you actually are stuffed without truck drivers.”

What followed was a devoted friendship and, last year, Ms Denny surprised Ms Jones by showing up on her doorstep in Karratha having acquired a multi-combination truck licence.

Ms Denny had stumbled upon a common problem for new entrants to the market – few jobs were available to inexperienced drivers and the cost of logging the hours required was prohibitive.

Together, the two women devised a solution. They co-founded the Pilbara Heavy Haulage Girls, a training initiative to give young drivers a chance to gain the minimum 180 driving hours needed before transport companies showed interest in hiring them.

Using four trucks from Success Transport and some subcontracted rigs, Ms Jones and her team have so far mentored and supervised four young women.

At the moment the pilot program is a drain on Success Transport’s resources, but Ms Jones said it had generated a lot of interest and looked likely to also gain financial support.

“We’ve been contacted by four multinationals wanting to help us financially to get as many people through our system as we possibly can,” she said.

“We want to start up a training academy where we can train as many newly licensed truck drivers as is required to replace the ones who are retiring and the 500,000 that we need over the next 15 years.”

All of the girls who have finished the training so far were hired within a week and they’ve now got 300 people on their books wanting to join the Pilbara Heavy Haulage Girls.

“We have to do something positive and proactive and to keep our roads safe,” Ms Jones said.