Standout junior explorers are finding investors for their mining projects, while others are cutting back on exploration and development to counteract a tough corporate finance market and increased government fees. 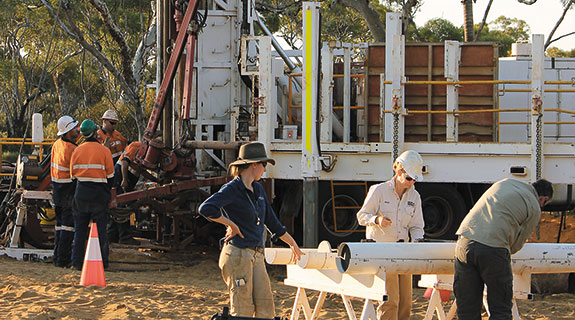 Standout junior explorers are finding investors for their mining projects, while others are cutting back on exploration and development to counteract a tough corporate finance market and increased government fees.

For more stories on our Junior Miners feature, see the Special Report.

What sort of return could an investor expect a decade after spreading $100,000 across a random selection of 100 Australian junior mineral exploration companies?

The answer, according to an analysis by MinEx Consulting managing director Richard Schodde, is a $60,000 profit, but from a very lopsided return.

Mr Schodde is a University of Western Australia adjunct associate professor and the author of a 2014 state government report about the importance of junior explorers to the New South Wales mining industry. 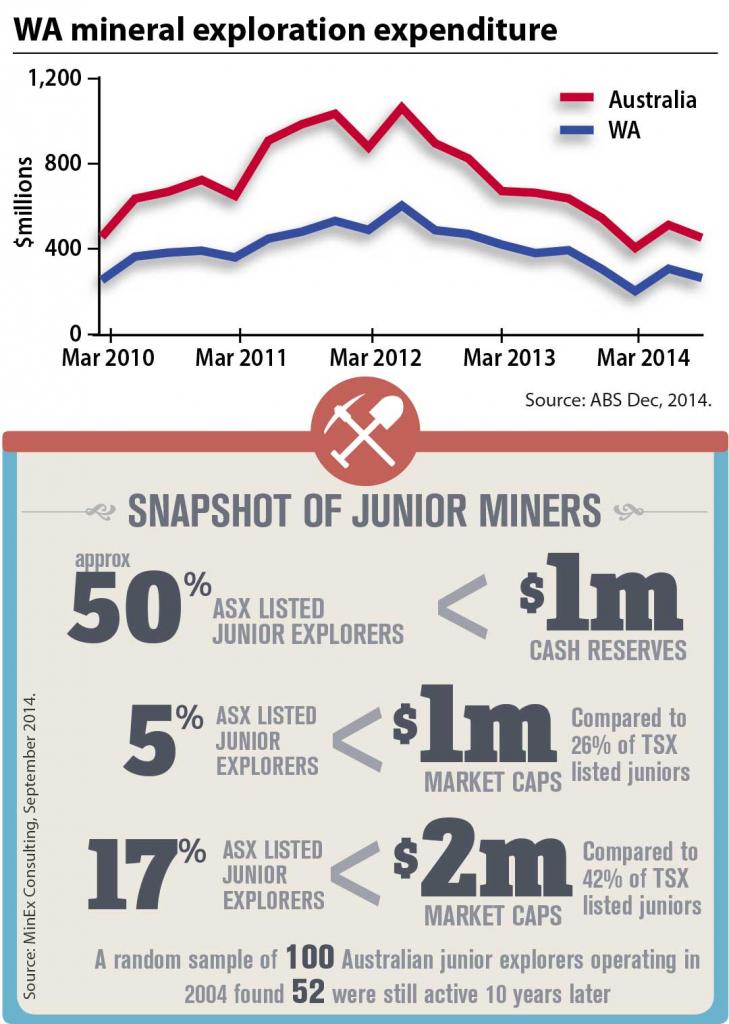 He has presented numerous publications on junior explorers and miners in Australia and worldwide and told Business News that, while the industry was under stress and cash reserves were at an all-time low, Australian juniors were surprisingly resilient.

In an analysis tracking a mock investment of $1,000 in each of 100 juniors on the ASX between July 2004 and July 2014, Mr Schodde found only 22 companies increased in value, half of which accounted for 77 per cent of the total value created.

“So there were a few companies out there that made ‘10 baggers’ in the trade, which paid for the sins of all of the others.”

The experiment is a good illustration of what many already know about the high risk and potentially high reward junior mining industry, which is an integral part of Western Australia’s strong resources culture.

While much has been said about current challenging conditions for miners, most attention has focused on the larger, better-known companies.

However, the environment is perhaps even more treacherous for explorers and miners with market caps less than $100 million.

Association of Mining and Exploration Companies chief executive Simon Bennison said negative market sentiment was making it almost impossible to raise capital, while a drop-off in exploration and an increase in fees as well as the uncertainty surrounding a potential royalty rate increase had spurred businesses to increase efficiencies so they could stay in the game.

“It’s biting right across the board,” Mr Bennison said.

“We’ve seen thousands of redundancies over the last six to 12 months and I’m sure we’ll see some more. This isn’t just producers and explorers, this is all service industries that rely on the resources sector.” AMEC has lobbied against recent fee increases by the Department of Mines and Petroleum for assessments of mining proposals and programs of work.

The fees were imposed to cover $2.7 million in a $4.8 million shortfall because of additional environmental regulations.

The DMP has also sought to allay criticism by pointing out WA’s mining-associated fees are still small compared with Queensland, but Mr Bennison said that statement couldn’t be proved.

“For anyone to come out and say our fee is the same as x,y, or z is reckless, it is not a fair or reasonable thing to do given the complexity of the fee structures in each individual state,” he said.

AMEC, which represents mining companies across Australia, is using its access to a wide geographical reach of data to undertake its own research to compare rates.

AMEC and the mining industry have also been lobbying against a potential change in the way the state collects mining royalties.

Premier Colin Barnett has publicly questioned whether the gold industry was paying its fair share of royalties, prompting a fight-back campaign from the industry while it awaits the delayed decision.

“It’s a hard market for the resource sector and at times of hard markets you need clarity and certainty, you don’t need grey, and Premier Barnett, having raised this months and months ago, creates an area of grey which is not needed,” Mr Kennedy told Business News.

He said increased DMP fees were also a concern.

“I think you’ll see a contraction, whether that pushes them out or not I don’t know, companies have been leaving this state for the past five years,” Mr Kennedy said.

“But that’s not where we are, we’re here, we’re staying and we’ll put up with the increased fees, but equally we will look at our portfolio of tenements.

“We cover a large area, over 1,900 square kilometres, our work expenditures are $3 million a year, it’s not small change.” However it’s not all bad news for RNI and the gold industry, which have watched the price of their commodity increase in recent months, while the falling oil price and Australian dollar have also improved project economics.

When RNI designed its 100 per cent owned Grosvenor gold project in the Bryah basin of WA, north-west of Meekatharra three years ago, it was based on a gold price around $1,700 an ounce.

As prices fell to $1,200, RNI went back to the drawing board, redesigning its pit and making other savings to take its cash costs to about $900/oz, which now stand to give it an even healthier profit margin following gold’s return to $1,600/oz trading prices.

RNI has estimated developing Grosvenor will cost $38.2 million, and the miner is in advanced discussions with several parties to raise the capital and meet its aim of pouring first gold by the end of the year.

Last week, it raised $1.25 million through a share placement.

Mr Kennedy said despite a tight capital market, RNI was successful in raising funds because it was more advanced than many explorers.

“The recent capital raising was made easier by the fact that those people who participated were able to get comfort ... that there is going to be real development in a short time,” he said.

While juniors’ demand for funds is large, much of the pool of investor interest has waned.

Patersons Securities associate director Don Inglis told Business News the market was probably as bad as he’d ever seen it and the appetite among investors for smaller speculative exploration stocks had vanished.

He said Australian juniors required between $300 million and $600 million a year just to survive.

This is based on the rough rule of thumb that the 650 listed exploration companies need at least $500,000 a year (for salaries, rent, admin, ASX and ASIC fees) while those actively exploring need at least $1 million a year.

The cash position of juniors is at an all-time low, however.

In an analysis of 125 junior exploration companies listed on the ASX between December 1998 and December 2014, Mr Schodde found the median rate of companies’ cash position was currently $1 million, down from a peak median cash reserve rate of $4.8 million in 2007.

“A quarter of the industry’s only got a quarter of a million dollars in the bank, which is a pretty stressful position to be in given that it’s very difficult for companies to raise money at the moment,” Mr Schodde said.

“But there’s always been a quarter of companies in a difficult position at any one time even during the good times.”

He said a better predictor of a company’s success was not how much money it had in the bank, but rather its market cap.

Juniors were spending on average an equal amount of money on fieldwork and administration fees, whereas in better times during 1998 to 2008 they were spending two to three times more on exploration and development, he said.

Denham Capital managing director Bert Koth said the market was now correcting itself after a bullish period of investing in mining.

“In the bull market a lot of capital was flowing into investment propositions that in a more realistic market would have never been funded, and now we have a drought that might last a couple of years,” he said.

“After the largest mining boom in history comes one of the longest hangovers in history.”

Accounting firm EY’s partner in M&A, Roger Dartnell, said while some entrepreneurial companies were viewing depressed times as a good opportunity to try and secure projects at a bargain price, most WA companies were unwilling to offload assets unless they could get a good return.

“At this point in the market no-one really wants to sell an asset unless they have to, but they might be willing to sell down an interest if it gives them some funding to get a project going,” he said.

“A good example of a company taking an innovative and creative approach to adding shareholder value is Poseidon Nickel,” she said

“They’ve undertaken low cost acquisitions and other transactions which have cut the capital costs of their projects dramatically.”