Universities are preparing for a major hit to revenue in 2015 as the long awaited half-cohort leaves high school to enter the tertiary education and training sector. 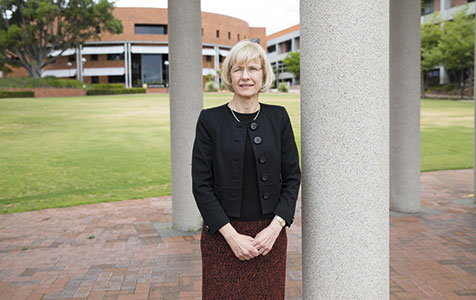 Universities are preparing for a major hit to revenue in 2015 as the long awaited half-cohort leaves high school to enter the tertiary education and training sector.

The half-cohort is a smaller-than-usual group of students, which started school 12 years ago under a split-year format.

While the number of first-round university applications has been declining in recent years, that number is set to drop by around 30 per cent across the sector for 2015 students.

According to Tertiary Institutions Services Centre data for the four public universities, the number of students submitting on-time applications is just 11,118, down 28.8 per cent for the same cut-off last year.

Curtin University vice-chancellor Deborah Terry said that, while Curtin had implemented a number of strategies to combat this reduction in available applicants, its unmitigated revenue loss for 2015 would be about $28 million.

This translates to a reduction of about 1,650 school leavers who would be otherwise applying to Curtin, she said.

“I feel that we are as well prepared as we could be. It means our budget into 2015 is very tight,” Professor Terry said.

University of Western Australia deputy vice-chancellor (education) Alec Cameron told Business News the university was expecting a revenue impact of $22 million in 2015, as a result of the half-cohort.

He said this took into account a student intake reduction of 30 per cent, with a projected shortfall of commencing domestic undergraduate students of around 1,200 students.

This financial impact would have a flow-on effect in the coming years as the smaller group of students moved through their degree, and also into postgraduate courses.

Professor Cameron confirmed that, despite the drop in enrolments, the university would not lower its entry requirements to fill more places.

The hit to university income will come as an additional financial blow if proposed university deregulation passes the Senate.

The Abbott government is continuing to negotiate with crossbench senators for the $5 billion saving to the government, under which base funding for universities would be cut by 20 per cent.

“It’s a tough environment certainly for us in terms of university finances,” Professor Cameron said.

“The consequence is that there are some areas that we can make some savings in terms of casual teaching resources that may not be required in the next couple of years with a reduced student enrolment.”

He said although the university may need to cut casual teaching staff, the university would not lay off full-time academic staff due to the pressures stemming from the half-cohort.

This view was echoed by Murdoch University acting vice-chancellor Andrew Taggart, who added that casual staff recruitment may be slowed.

Professor Taggart noted that school leavers only made up around 40 per cent of Murdoch’s incoming students, which cushioned the university more than other institutions that might take up to 90 per cent.

An Edith Cowan University spokesperson said it was still too early to tell accurately the financial impact of the half-cohort on its revenue, however ECU’s acting vice-chancellor Arshad Omari said the university was in a good position heading into 2015.

All four public universities said student recruitment and retention strategies had been put in some time ago to mitigate the impact of the half-cohort entering the university sector.

According to an ECU spokesperson, school leavers represent around a third of total applications, with the rest applying as mature age or direct entry.

The impact of a reduced number of school leavers will also be felt across the broader education sector.

Central Institute of Technology managing director Neil Fernandes said the half-year cohort was a “massive challenge”, with the training provider looking to other markets as well as working directly with businesses.