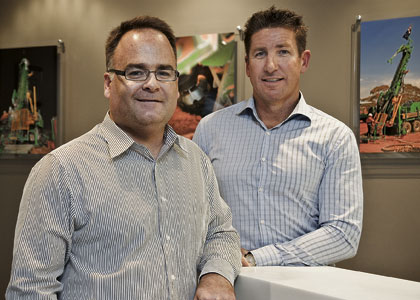 Paul Musca had an inauspicious start in business. While his peers did sensible things like study at university, he preferred surfing, while working as a labourer on drilling rigs.

But he had ambition and persistence, and that has paid off, in spades.

Nearly 20 years after founding Hagstrom Drilling, the business is winning work on many of the state’s largest projects, including the CityLink development in Northbridge, the Wheatstone gas project, the Roy Hill iron ore mine and Rio Tinto’s Cape Lambert port expansion.

Hagstrom has doubled staff numbers in the past three years, while turnover has grown even faster, and is set to reach $42 million in the current financial year.

Mr Musca now finds himself competing against large international contractors and he is well and truly up for the challenge.

“I enjoy the challenges and excitement of what I do,” he said.

“I’ve still got the energy and passion, I love it, I live and breathe it.”

Mr Musca started Hagstrom at the age of 24 and admits he had a blemished track record at the time.

Two previous businesses had failed, because he preferred to have fun surfing.

Despite that, he liked the industry, having worked on drilling rigs since he was at school.

Therefore, he took the plunge, borrowing money to buy a second-hand drilling rig and a LandCruiser.

Initially, he combined the Hagstrom work with paid employment as a labourer on drilling rigs but before long he focused on his own business.

The work opportunities came from his established business network, though he says money was very tight in the early days.

Being short of cash, he used to paint and repair the rig in his backyard and buy second-hand drill rods from scrap metal dealers.

Even in those early days, Mr Musca had a very clear idea of what he wanted to achieve.

“I always had ambitions of running a big company. I used to drive around on weekends and look at another company and say: ‘one day I’m going to be like that’.

“Everyone used to laugh and say: ‘yeah, sure you will’.  I was a young guy then but today we’ve created it and we’re still going, we’re not finished yet.

“We’re still enjoying the business and all of the different parts of the industry that we’re involved in, and building relationships. I still talk to people today who were clients back then, we’re still friends to this day.”

Mr Musca said a big break for the business was its move into environmental drilling, where its equipment is used to assess contamination in soil or groundwater. This led to contracts with companies like BP, Shell and Mobil.

“Nobody else was interested in that work, so I specialised in it,” he said.

“We became the leader in that market, we were travelling all over WA.”

That success enabled him to buy his first brand new rig, at a cost of about $80,000.

“I was able to buy new equipment, and better equipment, and that took the business to the next level, so we could provide the service for those big clients,” he said.

As the business grew, Mr Musca drew on his network of friends to help overcome his lack of knowledge in areas like contract law.

“I used to ring my mates and we’d meet on Sundays and they’d explain contract law, I relied on those people to help me move forward,” he said.

Staff numbers have grown to 80 and the company is looking for larger premises to support its growth.

A major step for the business was the recruitment of general manager Paul Jeffreys in 2009.

“I went through a recruitment agency to hand-pick a general manager,” Mr Musca said.

“Paul was brought in to add professionalism and corporatise the business and its operating systems.”

That was when Mr Musca was introduced to the use of psychometric testing, to help evaluate candidates for the role.

“We looked at both of our personalities,” he said.

“That was one of the key points in the selection process, to make sure we could work well together and complement each other.”

Meeting the two men, its clear they are complementary personalities with roles that support each other.

“Paul (Musca) is very entrepreneurial, whereas I’m not, I prefer to be in the back room,” Mr Jeffreys said.

A big part of his job is to give the business more of a corporate style.

“All the processes and systems were there but they weren’t formalised,” Mr Jeffreys said.

“Part of my role was to come in and make sure we had the right people in the right roles, running under the right policies and procedures.

“That’s the kind of thing that I enjoy.

“I also take the day-to-day grind off Paul, who is involved in the high-level business development, talking to clients, investigating new technologies, which enables us to develop additional services.”

Mr Jeffreys said another important focus was communication with staff, so they all understood where the business was heading.

While the two men come from very different backgrounds – Mr Musca has the street smarts while Mr Jeffrey has studied the management theories – they clearly appreciate each other’s contribution.

They also seem to have struck a good balance.

“I’ve dealt with a lot of people of Paul’s ilk,” Mr Jeffreys said. “Paul values what I’m trying to do and he understands how important that is and I think that is often missing in someone who is very entrepreneurial.

“They can get frustrated with the red tape; I come from a background where I want to make sure the systems we put in are relevant and not bureaucratic. If the process takes too long, there is something wrong with the process and it needs to be refined.”

Mr Musca said he talks regularly with Mr Jeffreys to ensure they are in touch.

“Communication is the key,” he said.

Mr Musca has seen big changes in the industry, which used to be the preserve of a handful of relatively small owner-operators like his own business.

“We were quite lucky to have a nice little niche market with a small number of players but now we are finding we are dealing with an international market,” Mr Musca said.

“That’s why we’ve had to develop the systems and change the business so we can compete with the international players.”

As well as international firms like Fugro and Boart Longyear, he is also seeing more competition from east coast contractors.

Mr Musca said another change was the contracting relationship.

Traditionally, Hagstrom has been engaged by consulting engineers like Coffey, Golder, URS and WorleyParsons.

In the past two years that started to change, as the developers of large projects contracted the drillers directly but Mr Musca suspects it is starting to reverse again.

Hagstrom’s core business is geotechnical drilling, where the company emphasises the high level of expertise and precision it can deliver to clients.

The company diversified its offering when it bought a business that operated an alternative soil-testing technique called cone penetration testing.

Mr Musca said CPT was complementary to its core service and was widely used in Europe.

“We approached the business; they still work for us, we’ve pumped more money into the business and new life into it,” he said.

In addition, Hagstrom has invested in marine equipment, and is negotiating to buy a subcontractor that supplies jack-up barges, so that this part of the business can be fully integrated.

The marine equipment gives it the ability to service near-shore projects like jetty construction, marinas, ship-loading facilities and pipelines.

The marsh buggy and jack-up barges are able to support both drilling and CPT activities and the barges can be utilised for other activities such as construction projects where a crane or excavator is required to be mounted on the barge.

Mr Musca said the range of services offered by Hagstrom helped to ‘de-risk’ the business. While it is very busy doing geotechnical work for resources projects, the company also does water, environmental, marine and civil work.

The company has also taken steps to diversify geographically by securing work in Queensland and the Northern Territory and is evaluating possibilities in Asia.

To support its focus on quality service and workplace safety, the company has coined a very simple slogan – Quality Service Safely.

It is backing this up with a focus on training and development for its staff.