Global law firm Herbert Smith Freehills has selected its Perth office to trial an ‘insourcing’ centre that will recruit up to 30 graduates to work in tandem with a similar centre in Dublin. 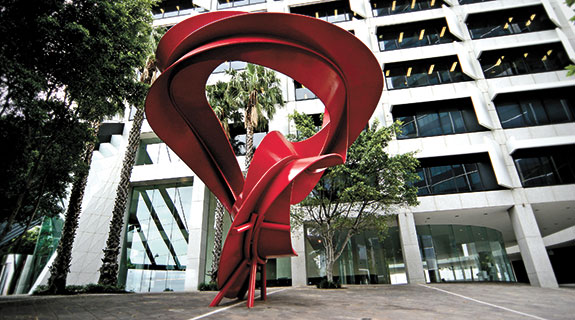 The new service will be based at HSF's QV.1 office.

Global law firm Herbert Smith Freehills has selected its Perth office to trial an ‘insourcing’ centre that will recruit up to 30 graduates to work in tandem with a similar centre in Dublin.

The law firm is in the midst of recruiting law graduates for the new office, which will run as a pilot for at least six months.

The Perth office is designed to complement the centre in Dublin, which was opened in 2011 and employs about 250 staff.

The insourcing strategy contrasts with other law firms that use specialist outsourcing providers, such as Integreon and Pangea3.

“We wanted to test this in Australia, and we need to get it up and running quickly,” he said.

The selection of Perth was partly opportunistic, because the firm has available space and IT infrastructure at it QV.1 premises.

Mr St John said Perth was also in a good time zone, for linking with Asia and having an overlap with Dublin.

He said HSF had attracted plenty of interest from young graduates, with most of its recruits not yet having a practising certificate.

“The universities are putting out more graduates than the traditional legal industry can absorb,” Mr St John said.

The new recruits will focus on reviewing documents for litigation, arbitration and investigations.

The first matter to be handled by the Perth team will be a large, international arbitration being run by London-based partners.

Mr St John said the staffing in the new centre was separate from the firm’s traditional graduate recruitment program.