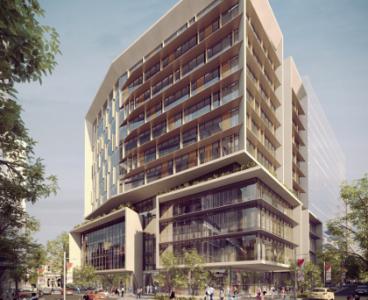 An impression of HBF's proposed new headquarters in Kings Square.

Leighton Properties is close to locking in plans for a second office tower in its Kings Square development in central Perth, with WA health insurer HBF in talks to buy one of the proposed buildings.

The 13,000 square metre property will replace HBF’s current head office in Murray Street, which the health insurer plans to sell or lease.

The new head office building is anticipated to be around 10 storeys and will house all of HBF’s city staff, and the health insurer is looking into a number of options to have part of the property offer a “range of health-related services” as part of a five-year plan to evolve into a “health partner”.

It is understood HBF is also exploring the opportunity to lease part of the new building.

In November it was revealed energy giant Shell would become an anchor tenant at one of the buildings that form the first stage of the Kings Square project, which sits at the old Perth Entertainment Centre site. That building will be 11 storeys with around 20,000sqm of office space.

Kings Square is being described by the Metropolitan Redevelopment Authority as an amalgamation of atmospheres of Lake and Kings Streets to create the cosmopolitan heart of the city.

HBF plan to move into its new premises in 2015.

The Kings Square project adjoins the bigger City Link development, for which Leighton and joint venture partner Mirvac have been named as the government's preferred proponent to develop the 5.1 hectare site.