The Noisy Guts Project and Chemo@home have taken home the respective Emerging Innovation and Growth categories at last nights Innovator of the Year awards, marking a big win for Perth-based healthcare and research. 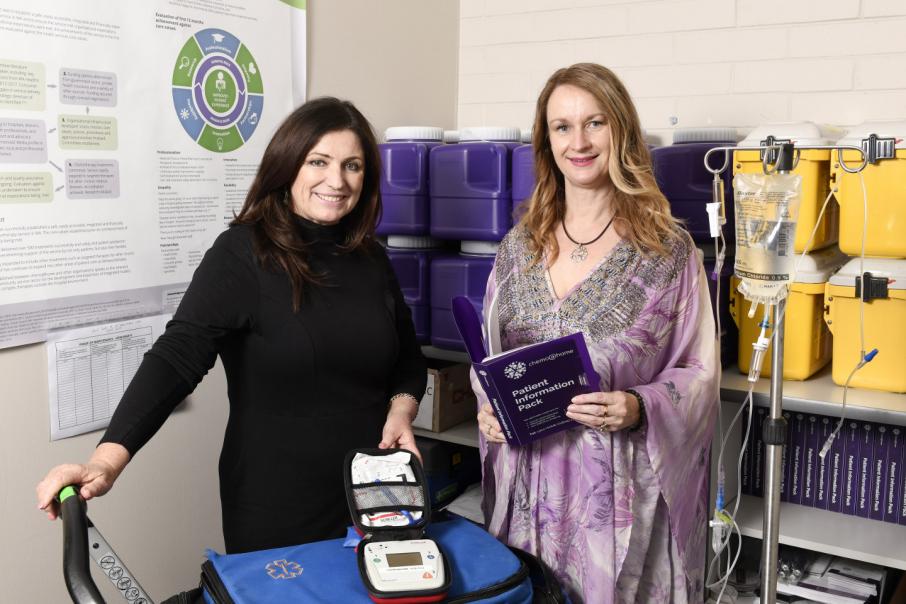 The Noisy Guts Project and Chemo@home have taken home the Emerging Innovation and Growth categories at last night Innovator of the Year awards, marking a big win for Perth-based healthcare and research.

An acoustic termite sensor featured at the Business News Innovator of the Year awards in 2014 has provided the inspiration for Barry Marshall’s Noisy Guts Project, which won the emerging innovation category at the 2018 event.

The Nobel Prize winner applied the acoustic technology to gut noises, developing a wearable, non-invasive acoustic belt, or ‘fit-bit’ for the gut that can be used to accurately diagnose irritable bowel syndrome.

Results from preliminary studies have found 87 per cent accuracy in IBS diagnosis, as well as giving insight to a range of other gut disorders.

Led by researchers Mary Webberley and Josephine Muir, Noisy Guts is currently in the process of producing a commercially viable product.

Dr Muir told Business News the technology was the first of its kind, as IBS sufferers generally had to undertake a restrictive FODMAP diet, excluding multiple food groups to identify those causing gut problems.

She said this was a major yet often inconclusive commitment for IBS sufferers, who regularly turned to expensive and unproven ‘cures’ out of desperation.

In contrast, the Noisy Guts device could provide objective information on which food groups a person should exclude, Dr Muir said.

She hopes that the project will be able to initiate regulatory procedures next March after completing clinical trials, enabling the product to get closer to market.

Part of the University of Western Australia, Noisy Guts has been supported financially through this relationship, as well as through private donors.

“We rely almost exclusively on philanthropic donations – our biggest supporter to date has been the McCusker Charitable Foundation,” Dr Muir said.

In an environment where grants are awarded based on academic publications, Noisy Guts had found itself in a difficult financial position.

“We haven’t been able to publish because of our patents; if we were to publish, we can’t patent our technology,” Dr Muir said.

“We’ve done that (patent process) now, but we’ve been completely unsuccessful in getting any grants because of that dilemma we’ve been in.

“What we’d really love is a venture capitalist to come onboard and see it through to market.

“We expect the whole process is going to cost $10 million; it’s just not cheap to do clinical trials.”

COMFORT and simplicity of service are key offerings for the Chemo@home team, winners of the Innovator of the Year growth category award, as the business expands across Australia.

Founded five years ago by Julie Adams and Lorna Cook, Chemo@home provides in-home infusion treatments to sufferers of cancer and other diseases.

After an initially small service across the Perth area, company director Ms Cook told Business News Chemo@home has expanded to Adelaide and Melbourne, and is soon to land in Sydney and Brisbane.

The idea stemmed from consumer demand for treatment services closer to home, particularly for chemotherapy and cancer treatment.

“We take something that’s traditionally been done in a really sad hospital environment,” Ms Cook said.

“We take all of that away and do something very complex in a simple holistic way, and in the patient’s home.”

Chemo@home now provides more than 140 different types of treatment, collaborating with doctors to ensure each individual patient has their needs met.

Ms Cook said an extensive process of risk mitigation is undertaken prior to home visits, meaning both patients and nurses are safe.

Ms Cook said the Chemo@home service had resulted in a 30 per cent lower hospital admission rate for clients.

Patients felt less stressed about receiving treatment, she said, and didn’t have to be exposed to germs that may be present in a hospital environment.

Chemo@home is primarily funded through the patients’ health funds.

Ms Cook plans to keep the organisations head office in Perth as they expand.

She said many people would often decline treatment so as not to be a burden on family members, but were significantly more willing to be treated in-home, as they didn’t have to rely on others to transport them to hospitals and provide care.

“It just makes it so much more normalised, and keeps people living their normal happy lives,” she said.

“Everything is moving people out into their home – rehabilitation and mental health, and now cancer services, that’s the big trend.”