Gucci to bail on Bontempos 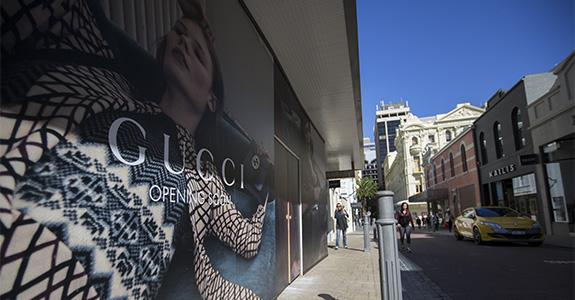 A new Gucci store is 'opening soon' at 30 King Street.

Gucci is leaving its long-term tenancy on the corner of King and Hay streets, but fashionistas need not panic, with the luxury retailer simply moving to the other side of the street.

Hoardings have been put up around 30 King Street, across the road from the existing Gucci store, which has leased space in a property owned by King Street's biggest landlord, Bontempo Nominees. The hoarding proclaims a new Gucci store will be opening soon.

Review of building permit applications to the City of Perth show there was an application for the hoardings in early July, to be installed for a period of four months.

It does not appear that there has been an application for fit-out works for the building.

Business News understands the deal for Gucci to leave its current home was brokered by commercial agency Churchill Knight Real Estate Agents, which has an office at level 1, 30 King Street.

Enquiries to Churchill Knight's founder and director, Aldo Gianotti, as well as Gucci itself, had not been responded to at time of publication.

Industry sources who asked not to be named have suggested the move is due to a friendlier rental deal being offered by the landlords at 30 King Street.

Earlier this year, Business News sources suggested there was a disagreement between Gucci and Bontempo Nominees, but both companies vehemently denied this was the case when approached for interview.

A Bontempo Nominees spokesperson would not confirm or deny Gucci was shifting, only saying that there were exciting plans in place for the King Street precinct that would be revealed in due course.