Brendon Grylls has snatched back leadership of the WA Nationals and will press the Barnett government to support his plan to slug BHP Billiton and Rio Tinto with a $5 per tonne mining tax. 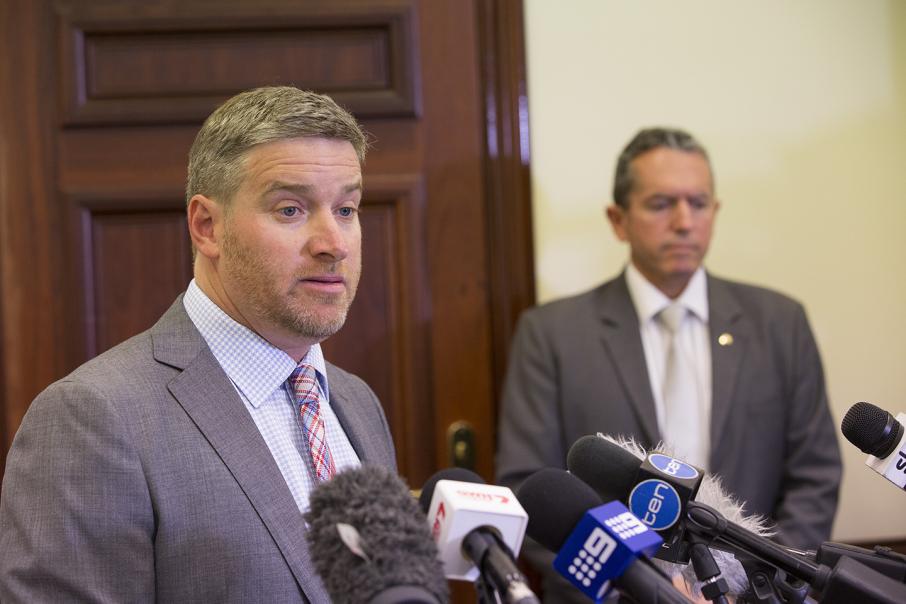 Brendon Grylls has snatched back leadership of the WA Nationals and will press the Barnett government to support his plan to slug BHP Billiton and Rio Tinto with a $5 per tonne mining tax.

Mr Grylls has regained the party's leadership, after Terry Redman decided today to step down rather than hold a contested ballot.

Mr Redman will retain his regional development portfolio, which oversees the Royalties for Regions program, but Colin Holt has lost his portfolios, which will be transferred to Mr Grylls.

“The WA Nationals have asked me to return as leader, to pursue an aggressive revenue raising and job creation strategy,” Mr Grylls told reporters today.

“The hangover from the mining boom is deep and causing enormous concern, and even the Reserve Bank has admitted they do not have the tools to stimulate the WA economy.

Mr Grylls said raising the rental to $5 would rapidly return the budget to surplus and give the state government scope for payroll tax reductions, and would help stimulate employment.

“I understand there will be a massive campaign by industry against this. There has been before. It cost a prime minister his job,” he said.

“The Nationals believe that we as a state have facilitated a huge expansion of the iron ore industry at great cost to our state budget, and that the miners aren’t paying their fare share.”

Mr Grylls called on the mining companies to work with the state to demand from the Commonwealth a 75 cent floor in the GST (carve-up).

Currently, WA only gets a 30 cent share of the GST.

“If this floor in the GST can be achieved, the production rental increase can be reduced or withdrawn,” Mr Grylls said.

He said he met with Mr Redman and Premier Colin Barnett last night and agreed to bring senior members of both parties together to agree on strategies to repair the budget deficit, create jobs, and bring the prime minister to the table on the GST reform issue.

Mr Grylls said his proposed changes to the production rental would be on the table, despite Mr Barnett outright rejecting the plans earlier today.

Mr Barnett told reporters the plan would not be adopted as Liberal Party policy and was undoubtedly of concern to the corporate giants.

He also rejected Mr Grylls' suggestion the Liberals didn't have a plan to improve the state's ailing balance sheet, saying all would be revealed in the lead up to the election.

The premier said he didn't believe the alliance between the Liberals and the Nationals would be broken up "under any situation".

"Sure, parties have their own view, sometimes there's tension ... but we are strong in partnership," Mr Barnett said.

However, the Liberals could lead without the country-focused party if they had to.

"Technically, we can," Mr Barnett said.

The premier said he was disappointed with Mr Grylls' comment yesterday that the March state election was unwinnable for the alliance with its current leaders.

"I'd prefer (such remarks) weren't made," Mr Barnett said.

"That might be Brendon's view but it's not my view."

Mr Grylls’ appointment has already sparked concern from the mining industry, with Chamber of Commerce and Industry of WA chief executive Deidre Willmott saying his plans to slug the engine room of the WA economy wasn’t supported by business and was unlikely to proceed, given it would need the support of the Nationals’ alliance partners.

“This couldn’t come at a worse time because business is trying to turn the corner after months of difficult conditions and we expect this proposal will reverse any green shoots in business confidence.”

“This is robbing Peter to pay Paul and would actually have the perverse effect of reducing opportunity for businesses of all sizes in Western Australia,” she said.

“The state government should be focusing on lowering taxes – including payroll tax – on business by reducing its own spending and reducing debt including through asset sales.”

“If the $5 increase was counted as a royalty it would actually have the perverse effect of increasing the amount of money we have to pay to the Commonwealth Grants Commission - for every $100 million in additional revenue that this mining tax would deliver the state through increased royalties, Western Australia would redistribute $89 million through the GST process,” she said.

“Mr Grylls has an impressive record in championing regional interests – we’d urge him to go back to the drawing board so we can collaborate to achieve real and practical outcomes for regional businesses.”

Chamber of Minerals and Energy of Western Australia chief executive Reg Howard-Smith said confidence in WA’s reputation as a mining investment hub would be severely dented if Mr Grylls’ plan to tax BHP Billiton and Rio Tinto was implemented.

“What Mr Grylls hasn’t factored in here is the damage this would do to our superior reputation as a world leader for mining investment,” Mr Howard-Smith said.

“At a time when all companies are focused on innovation and lowering production costs to remain competitive, Mr Grylls wants to impose significant additional government charges on two of the state’s major financial contributors.

“While Mr Grylls’ short-sighted plan to tax BHP Billiton and Rio Tinto is only in its infancy, the suggestion of increasing discriminatory government charges on specific companies is a strong deterrent to investment.

“The focus of our policy makers needs to be on how we make our industry more internationally competitive and more productive – not less so.”

WAFarmers reaffirmed its cooperation with the Nationals, stating that the organisation would continue to work with the party to further the interests of the state’s agricultural sector, regardless of the leader.

WAFarmers president Tony York said the organisation hoped the reinstatement of Mr Grylls as leader would continue to build on the work undertaken by the Nationals under Mr Redman’s leadership.

“Throughout his tenure as leader of the National party of WA, WAFarmers has worked closely with Mr Redman and his team on a number of past and ongoing issues,” Mr York said.

“We hope to have as strong a relationship with Mr Grylls and his team following his reinstatement as party leader so that, together, we can further the interests of our members and the wider agricultural sector.

“Regardless of who holds the leadership position or whether the alliance between the Nationals and the Liberals will remain in its current form, WAFarmers will continue to work alongside the individual parties and the state government to represent the voice of our members and move towards a more viable, profitable and sustainable future for the state’s agricultural industry.”

Mr Grylls stepped down as the Nationals WA leader three years ago and took a back seat so he could spend more time with his family.