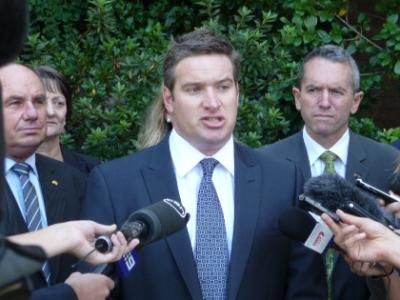 Nationals leader Brendon Grylls has confirmed he will contest the seat of Pilbara at the next state election rather than stand in his safe Central Wheatbelt electorate.

Making the announcement today, Mr Grylls said he is making the move to protect his Royalties for Regions funding scheme, adding that without securing Nationals seats on the parliament floor the scheme would be dismantled.

An alliance was formed between the National and Liberal parties to form government after the last state election, and under that alliance Mr Grylls has directed $1 billion into the Pilbara and other regions as minister for regional development and custodian of the Royalties for Regions scheme.

He said the alliance has worked well and he has enjoyed working alongside premier Colin Barnett and treasurer Christian Porter, but feared for the future of the royalties scheme without the Nationals on side with the government.

"I am absolutely convinced that without the numbers on the floor of the parliament, the Royalties for Regions program will be dismantled," he said.

He said opposition parties have used 'honeyed' words when it comes to continuing the royalties scheme, which do not provide the same security as bolstering the Nationals party by picking up the Pilbara seat, which is currently held firmly by Labor's Tom Stephens.

"Country people understand that without the numbers on the floor of parliament, I can't make a difference to regional development. My party, my colleagues, my state council members understand that to continue Royalties for Regions beyond 2013, our numbers are needed on the floor," Mr Grylls said.

Premier Barnett has described the move as a "risky strategy" and yesterday urged Mr Grylls to "have a cold shower" and reconsider.

Mr Grylls lives in Perth and said he would continue to do so if he was elected to the Pilbara seat. "I am more than happy to be judged on my record of delivery rather than where I live," he said.

The Labor party appears to have secured a surprise candidate for the seat in popular Port Hedland mayor Kelly Howlett.

Mr Grylls is still to go through the official nomination process, which will most likely be completed in April; he said he has full support from parliamentary and council members.