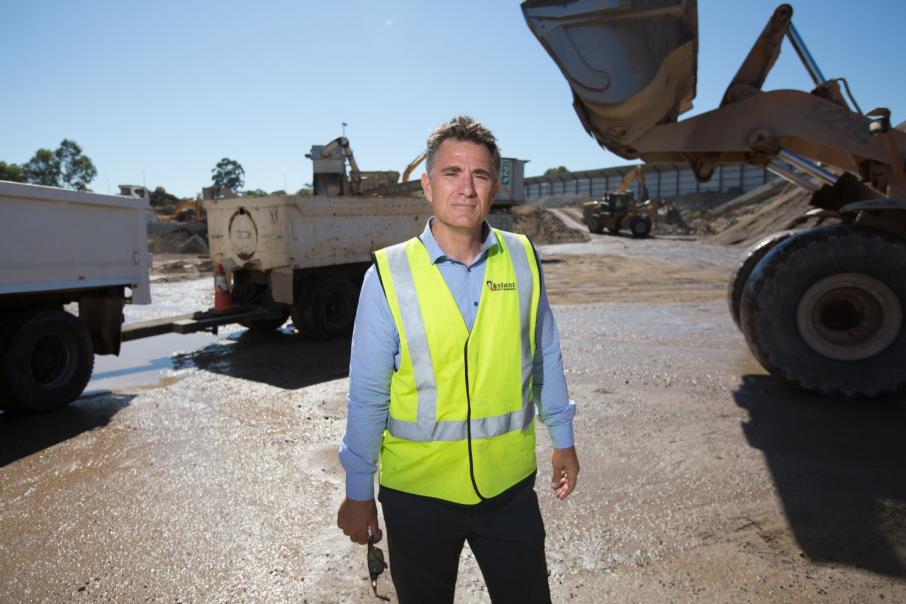 Sam Mangione has pleaded not guilty to the charge. Photo: Attila Csaszar

Mr Mangione has been charged with gross negligence in failing to provide and maintain a safe work environment.

The charge relates to a 2016 incident at the Bayswater operations of his company, Resource Recovery Solutions, when a labour hire worker lost an arm.

The worker’s arm was caught between a conveyer belt and a roller while he was doing his job, which involved removing unsuitable items from conveyor belts and clearing blockages or jams in various machines.

Mr Mangione, who is also managing director of skip bin company Instant Waste Management, has pleaded not guilty to the charge, which carries a maximum penalty of a $250,000 fine and two years’ imprisonment.

The details of the charge, which was laid in July 2018, came to light after Resource Recovery Solutions was found guilty earlier this month of the same charge over the same incident.

The conviction coincided with renewed debate over the state government’s Work Safety and Health Bill 2019, which is a wholesale rewrite of the existing Act designed to align with national standards.

The most contentious aspect is new industrial manslaughter offences under which guilty people could be imprisoned for up to 20 years and companies fined up to $10 million.

Business groups, led by the Master Builders Association of WA, have campaigned strongly against the proposed changes.

The public debate over industrial manslaughter has largely ignored the fact company directors face the possibility of jail terms under the existing Act.

WorkSafe WA commissioner Darren Kavanagh commented on the 2016 incident early this month, after Resource Recovery Solutions was convicted in the Perth Magistrates Court.

“This decision is important as it is the first time an entity has been found guilty of gross negligence under the Occupational Safety and Health Act, the most serious offence possible under that Act,” Mr Kavanagh said.

“The obligation on WorkSafe as a prosecutor to prove that a company has been grossly negligent is particularly difficult.

“The company had a long history of flouting workplace safety laws, particularly by failing to guard dangerous machinery despite previous serious injuries and despite being instructed to fit guarding by WorkSafe inspectors.”

The 2016 incident was the third serious safety breach at Resource Recovery Solutions. In 2013, a worker at its Bayswater plant was killed when an overloaded roof panel collapsed and crushed him. The company was fined $85,000 over that incident.

In 2015, another worker suffered a broken arm when he was dragged into a moving conveyor belt with no guarding.

Resource Recovery Solutions faces a maximum penalty of a $500,000 fine after this month’s conviction.

The company has not yet been sentenced but has been sternly criticised by the Magistrate.

“The Magistrate stated in her decision that the disregard for safety was blatant and went well beyond mere neglect,” Mr Kavanagh said.

“The Magistrate concluded beyond reasonable doubt that the company acted or failed to act in disregard of the likelihood of causing death or serious harm to a person to whom a duty was owed.”

As well as Mr Mangione and Resource Recovery Solutions, labour hire company Mode 2 Group has been charged over the same incident.

It has been charged with failing to provide and maintain a safe work environment and, by that failure, causing serious harm to a person. The maximum penalty is $400,000.

Notably, the charge against Mr Mangione is more serious than the charges laid in relation to recent high-profile workplace deaths.

A prime example was the death of 17-year-old Wesley Ballantine, who fell to his death inside the old GPO building in Forrest Place during a construction project in 2017.

His employer, Industrial Construction Services, has been charged with failing to provide and maintain a safe work environment and, by that failure, causing death. The maximum penalty for this offence is $400,000.

ICS director Adam Tony Forsyth and manager Luke Fraser Corderoy have each been personally charged with a similar offence, with a maximum penalty of $200,000.

All have pleaded not guilty, and are due back in court in October.

The main contractor on the GPO project, Valmont WA, was convicted of a less serious charge - failing to ensure that persons who were not their employees were not exposed to hazards.