Few in the crowd captivated by the recent Ashes action at the WACA Ground would be aware that the immaculate grooming of the oval is, in part, due to lawn mowing machinery built in Bayswater. 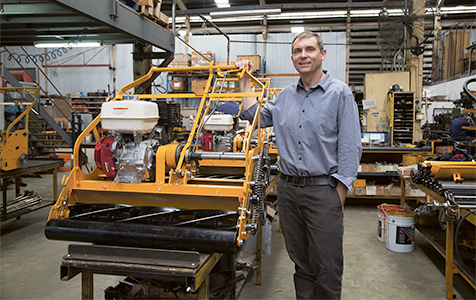 Few in the crowd captivated by the recent Ashes action at the WACA Ground would be aware that the immaculate grooming of the oval is, in part, due to lawn mowing machinery built in Bayswater.

But in the professional mowing business, cutting the turf on which Australia reclaimed the urn this week is old news; so Bayswater-based manufacturer MEY Equipment is seeking greener pastures in export markets.

Its latest move is a partnership with the Middle East subsidiary of British sports turf company Support in Sport (SIS) to provide MEY’s professional mowers to countries in the Middle East.

MEY Equipment, which manufactures cylinder mowers used on turf at the WACA, Gabba and the MCG, had the deal facilitated by contract marketing company Concordia, which has been introducing Western Australian companies into the Middle East market for 34 years.

WA has long been Australia’s home for manufacturers of cylinder mowers, which differ from household rotary mowers by using a scissor-like action that cuts more evenly with less damage to turf.

WA manufacturers established themselves as the hub of the industry for the 1962 Commonwealth Games, and maintained their prominence thanks to healthy in-state competition and a lack of major start-ups elsewhere.

Concordia founder and managing director Michael Cottam said MEY was considered to be one of the top five global manufacturers of cylinder mowers, and it was for this reason he had approached the business to export to the Middle East, which is gearing up for the soccer World Cup in Doha in 2022 and the World Expo in Dubai in 2020.

Mr Cottam, who also works as a contract marketer to nursery Sunnyvale and Baileys Fertiliser, approached his friend and SIS managing director, David Ball, with information on MEY because he knew Mr Ball was looking for mowers for new turf and stadium contracts.

What resulted was an export partnership and two-year contract for MEY to supply mowers for SIS’s contracts at sports fields in all major Gulf states and Iraq.

MEY Equipment managing director Richard Keamy said the deal was transformative for the company, which would initially focus a quarter of its resources on exports before growing the new aspect of the business over time.

“It will make a significant difference. Suddenly our focus is on a worldwide export market because in the process we’ve learned that our mowers are really world class,” he said.

“Previously (SIS) would look to machines from the UK, and being a UK company that was their natural place of call,” he said.

Mr Keamy said MEY was interested in pursuing future export deals, which would most likely take the form of a partnership with SIS or with other companies operating in countries SIS didn’t, such as Sri Lanka and India.

He said it was early days but those partnerships may also result in MEY having mowers earmarked for foreign countries manufactured under licence in those countries using MEY’s designs.

For now Mr Keamy said his staff of 15 would have their hands full manufacturing enough mowers to meet SIS’s demand.

“We’re probably under capacity at the moment so it will bring us up to capacity and once we reach there we’ll then seek to expand,” he said.