The cost of electricity from renewable sources is becoming clearer. 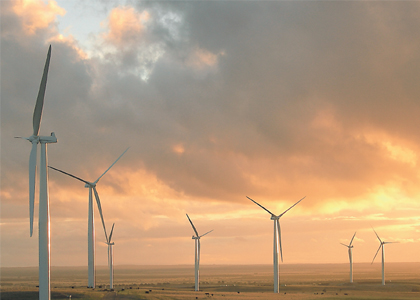 SMALL PLAYER: Australia’s commitment to wind power is dwarfed by that of Germany.

The cost of electricity from renewable sources is becoming clearer.

COLD comfort it might be, but Australia was not alone last week in feeling the first lash of the high­er electricity bills that come from promoting high-cost renewables as a replacement for high-polluting fossil fuels, or politically incorrect nuclear power.

In Germany and Japan, two of the leaders in the rush to a green-power future, eyebrows were raised over a combination of price increases and the dawning of concern about wheth­er there would be enough electricity to keep factories functioning.

Australia’s taste of what it will cost to switch from coal and gas to wind and solar power was deliv­ered in the form of the carbon tax, and while expected and relatively modest, it was a wake-up call that electricity will become a much more expensive commodity in the future.

Precisely how expensive is unknown, but the 1.4 per cent rise in the consumer price index in the September quarter was dominated by the increased cost of electricity and gas, which rose by 15.3 per cent and 14.2 per cent respectively.

Finger pointing about how much of the rise was the result of the car­bon tax and how much was caused by inefficient state-owned electric­ity utilities drowned the debate, though analysts at the investment bank, JP Morgan, reckon the tax contributed between 0.3 per cent and 0.4 per cent to the inflation rate in the three months to September 30.

More must come because the car­bon tax is actually doing precisely what it was designed to do - boost the cost of carbon-based power to encourage a switch to green renewa­bles.

Unknown when this bold plan to encourage a switch in power sources was conceived, and still unknown today, is what the full costs will be and, more importantly, who will pay.

In Germany, which is more advanced than Australia in its push for green power, the first signs of a consumer revolt have been noted thanks to a sharp increase announced two weeks ago in the size of the subsidy demanded by electricity producers to supply wind and/or solar power.

The surcharge on top of the aver­age power bill for the renewable component will rise by an alarm­ing 52 per cent next year from 3.6 euro cents to 5.5 cents per kilowatt hour, adding an estimated €185 to a three-person household’s annual electricity bill.

That hike has triggered a debate in Germany about what the final cost will be for green power, as the coun­try embarks on a plan to close all of its nuclear reactors and replace them with the world’s biggest concentra­tion of wind turbines in the North Sea - a massive construction project that is already running over-budget and behind schedule.

Japan is also starting to reconsider its plan to close all of its nuclear fleet, a knee-jerk response to the Fukushima tsunami and reactor meltdown.

What has quietly dawned on the Japanese government is that moth­balling 30 per cent of the country’s source of electricity is a courageous undertaking when there is no cost- effective alternative available; and burning coal and gas is not only against green principles, but very expensive.

That’s why the government in Tokyo quietly slipped in a subtle change to its total closure plan by authorising the completion of con­struction of three unfinished reac­tors, which will be exempt from the total phase-out plan - a decision that redefines the word ‘total’.

Admirable as it might be to plan a non-polluting, nuclear-free world of electricity generation, the two questions industry and households around the world are starting to ask is, at what cost and who pays?

IF rising power costs are a worry then surely falling interest rates are a good thing - or are they?

Over the past few months, ultra- low rates in Europe and the US have encouraged Australian companies to take on extra debt, denominated in foreign currency.

BHP Billiton, Fortescue Metals Group, Newcrest, Atlas Iron and Ausdrill are five examples of locals lured to beef up their balance sheets with US dollar debt, largely because the money is available and also because it comes at a hefty discount to domestic debt.

In principle, there is nothing wrong with Australian companies financing in US dollar debt if they also have an offsetting hedge posi­tion in the form of US dollar income - which iron ore and gold miners do.

What investors ought to watch out for, however, are Australian companies signing up for US dollar (or euro) debt if they do not have a natural hedge position, and even if they claim to have arranged some other form of currency hedge.

What unhedged borrowers might find, to their great expense, is that currency fluctuations can leave them exposed to horrendously higher repayment commitments, which dramatically outweigh the original interest rate advantage.

Back in the 1980s Westpac encouraged fanner clients to sign up for low-interest loans denominated in Swiss francs, which, not long after the ink was dry on the deals, started to appreciate alarmingly against a tumbling Australian dollar.

The net result of the currency moves was that some farmer clients were effectively wiped out, as was Westpac’s reputation at the time because of its failure to provide suf­ficient warning about currency risk. Super-low interest rates on offer today in the US and Europe have the potential to produce a painful trip down memory lane for unwary borrowers.

WESTERN Australia’s keenly awaited move into the ranks of magnetite exporters should take two big steps forward in the next few weeks as Gindalbie and Sino Iron start loading ships at Geraldton and on the north-west coast respec­tively.

The first deliveries of processed low-grade iron ore will be a cause for celebration at both projects, and it would be an awfully callous observer who asked questions on the day about production costs, or whether either project will be prof­itable in the long term. Those rude questions can wait a little longer.