Australians’ view on debt repayment seems to be that tough fiscal measures are best … for other people. 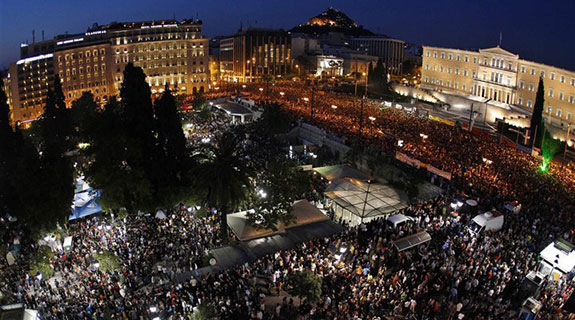 PUSH BACK: The austerity measures of the previous Greek government were unpopular. Photo: iStockphoto

Australians’ view on debt repayment seems to be that tough fiscal measures are best … for other people.

The Greeks are being framed.

In behavioural finance, which is the application of psychology to financial markets, ‘framing’ is the phenomenon whereby people’s assessment of financial situations depends on how information is presented. Identical information presented differently systematically changes value judgements.

For example, many commentators have decried the US government’s decision to bail out of its largest banks during the GFC on the grounds that those large corporations should have borne the consequences of their poor lending decisions.

Eminent Harvard political economist Benjamin Friedman has pointed out that an equivalent rescue package for large European financial companies – German banks prominent among them – has been provided by the governments of fiscally strong European countries. They’ve done so by lending funds to the Greeks (among others) to allow them to pay off the banks and issue new debt.

The ‘bail out’ has passed largely unremarked because it hasn’t been packaged as such.

Unlike the US case, where subprime borrowers with non-recourse loans have been able to walk away from their debt obligations, the Greeks have had contractionary fiscal policies and structural reforms imposed on them as conditions of the bail out of the European financial institutions; that is, the borrowers have been asked to bear the brunt of the rescue package.  It is the severity of those conditions that is the crucial matter.

One might expect Australians to be sympathetic to the Greeks, given the political challenges the Abbott government is facing in controlling our relatively modest (by world standards) budget deficit but, oddly enough, most commentators and ordinary folk seem to relish taking a hard-line stance.  Our approach seems to be: tough fiscal measures are best … for other people.

Getting off our high horse, there are compelling reasons to side with Greece by urging a more forgiving, conciliatory approach on the part of its creditors. As Professor Friedman has said: “There is no economic ground for Germany to be the only European country in modern times to be granted official debt restructuring and debt relief on a massive scale, and certainly no moral ground either.”

The economic ground for significant debt restructuring and debt relief is simple: there’s no benefit in imposing debt repayment schedules on people such that they lose hope in achieving economic progress.

At the national level, punitive debt repayments have the effect of making extreme political positions, often with a xenophobic element, popular.  This is what happened in Germany between the world wars when Hitler came to power. The appeal of the extremist party, Golden Dawn, in Greece has the same root causes. It is, as Professor Friedman declared in the title of his 2014 speech at the Bank of International Settlements, “a predictable pathology”.

After WWII, the consequences of extracting a pound of flesh to repay a national debt were stark enough that a meeting in London of Germany’s international creditors resolved to: reduce German debt by at least half; reschedule the remainder so that no principal repayments were due for five years; and allow payments to be made over 30 years.

Pertinently, this was done despite what has been described as ‘long years of … Germany’s irresponsible treatment of foreign debts and property owned by foreigners’, not to mention the horror of the Holocaust.

It is presumably this legacy that prompts Professor Friedman to claim that Germany has no moral ground to be only European country to benefit from debt forgiveness.

There is another vital underappreciated analogy about Greece’s national debt that Professor Friedman draws to our attention.  European national debt is unlike, say, US or Japanese debt, in the sense that EU governments are not empowered to print the currency on which their debt is owed.  The Greek national debt is similar to, say, the Californian state government debt. It is entirely possible for the Californian government to default on its debt – indeed this has been a real risk because of its steep budget deficits – but no-one seriously contemplates California breaking away from the US union and forming its own currency if it did default.

If Greece were to default on its debt, it is entirely possible for the country to remain within the EU. The issue is whether there is sufficient will among the relevant stakeholders for Greece to remain in the EU.

As always, it is a question of framing.