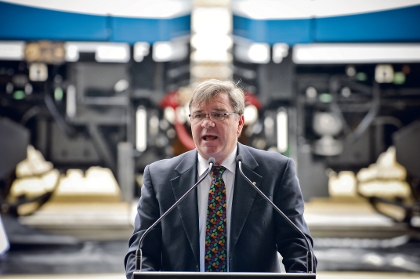 Western Australian junior minister Gary Gray has been promoted to federal cabinet, taking the pivotal Resources and Energy portfolio in a reshuffle announced by Prime Minister Julia Gillard this morning.

He replaces Labor veteran Martin Ferguson, who resigned from cabinet last week after backing former prime minister Kevin Rudd in a failed attempt at a leadership change. Mr Ferguson, a widely respected figure within the business community, had served as Resources Minister since 2007.

Mr Gray, a former Woodside executive who holds the marginal seat of Brand, will also take the Tourism portfolio. His previous responsibilities as Special Minister of State and Minister for the Public Service and Integrity will go to Attorney-General Mark Dreyfus.

The resources sector has given its nod of approval to the appointment this morning.

Ms Gillard had been forced to reshuffle her ministry for the sixth time since the 2010 election, following the sacking of senior minister and key Rudd backer Simon Crean and the resignation of Mr Ferguson, Chris Bowen and Kim Carr.

Despite being identified as a likely deputy to Mr Rudd in the event of a successful challenge, Transport and Infrastructure Minister Anthony Albanese received a promotion. He will take the additional portfolios of Regional Development and Local Government vacated by Mr Crean.

Ms Gillard said purpose had driven the government but unity had proved elusive.

"And that unity spectacularly eluded us last week," she told reporters in Canberra.

"Like Australians around the nation, I was appalled by the events of last week.

"My political party, the Labor Party that I love very dearly was self-indulgent.

"Our eyes were on ourselves rather than doing what we should have, being focused on the nation.

"It was an unseemly display."

Ms Gillard said out of that had come clarity and it was now clear she had the confidence of her colleagues to remain as prime minister.

"It is also clear that Kevin Rudd has appropriately acknowledged he will never lead the Labor Party again," she said.

"In these circumstances, the leadership contest that has been within the Labor party is over."

Minister for Home Affairs and Justice Jason Clare has also been elevated to cabinet as a full member and will maintain his current portfolios.

"I am delighted that I have been able to promote Jan to this role," Ms Gillard said.

The Minister for Trade and Competitiveness, and Minister Assisting the Prime Minister on Asian Century Policy, Craig Emerson, will also take on the portfolio of Tertiary Education, Skills, Science and Research.

He will be assisted by two new junior ministers in Don Farrell and Sharon Bird.

Economist Andrew Leigh will take on the role of parliamentary secretary to the Prime Minister.

The new members of the ministry will be sworn in by the Governor-General later today.