The federal government seems to be preparing the public for reform with its semi-regular announcements from ministers that ‘everything is on the table’, particularly since Malcolm Turnbull took the prime ministership from Tony Abbott. 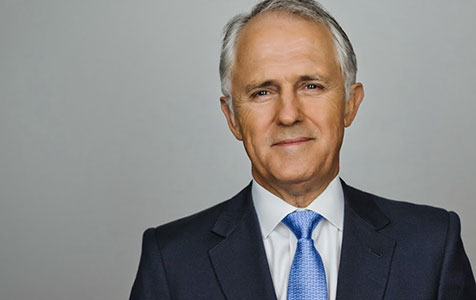 BROAD BRUSH: Malcolm Turnbull says everything is ‘ on the table’.

The federal government seems to be preparing the public for reform with its semi-regular announcements from ministers that ‘everything is on the table’, particularly since Malcolm Turnbull took the prime ministership from Tony Abbott.

We are to be agile and flexible on policy, open to all sorts of new ideas.

The new treasurer, Scott Morrison, has led the charge by repeatedly reminding voters of the government’s need to restrain spending, given the collapse of revenue bases.

One think-tank that’s increasingly coming to the rescue of the treasurer is the Melbourne-based Grattan Institute.

Billed as Australia’s answer to the prestigious US Brookings Institution, the Grattan Institute began with two $15 million endowments from the Rudd Labor government and Victoria’s Bracks Labor government.

BHP Billiton also provided $4 million, and the institute enjoys rent-free floor premises from the University of Melbourne, in a nearby building just off Grattan Street in Carlton.

The institute is the brainchild of ex-Victorian public service scion Terry Moran, who was picked by Mr Rudd to head the Prime Minister’s Department, after which the institute got the green light for federal Labor funding.

The institute’s board controls the endowment, with funds invested and income derived to fund 29 staffers and researchers.

For the year ended 2014-15, the institute’s operating expenditure was running at $5 million annually.

Mr Eccles held senior executive positions in the NSW Labor state government during 2011-14, and South Australia’s between 2009 and 2011.

The institute’s backers claimed that its main point of difference would be its level of funding and absence of, and freedom from, a guiding ideology.

However, in recent years, this claim that the institute would remain free of government influence, despite the substantial start-up funding provided by the Labor-run state and federal governments, has begun wearing thin.

In a December 3 opinion column in The Australian, the Grattan Institute’s Mr Daley wrote that: “Scott Morrison is now on board, declaring that the purpose of superannuation should not be to facilitate estate planning or allow millions to be squirreled away tax-free in retirement.”

He went on to say that it was unfair that: “Younger wage earners on $40,000 a year are paying far more tax than retirees do on much higher super incomes”.

The fact that most retirees have paid all forms of tax all through their working life, in addition to somehow finding the funds to outlay for GST, health insurance, medications, rates and government charges in retirement, appears to have escaped Mr Daley’s attention.

The institute proposed limiting pre-tax annual contributions to superannuation accounts to a meagre $11,000 per person, and to tax investment earnings in retirement.

Economist and columnist Judith Sloan shone a spotlight on this contention with the following cute response.

“And how dare people die with assets intact, including some of their superannuation. Evidently we should ask ourselves whether we want tax-preferred super to become bequests,” Professor Sloan wrote

“(Apparently) old people are self-serving, silly old duffers who bizarrely want to leave something to their children,” she continued.

In December 2014, Grattan Institute released its ‘Wealth of Generations’ report, which proposed greater ‘fairness’ through tighter targeting of the age pension, reducing superannuation tax concessions, and a shift to increase taxes on assets in order to redress the balance.

As further evidence of the institute’s growing influence over coalition policy, guaranteed by a deal with the Greens, the 2015 federal budget essentially implemented these proposals.

Self-funded pensioners who worked hard to accumulate assets over $500,000 are set to be hit with massive cuts to their pension entitlements, legislated to commence January 1 2017.

Grattan proposes boosting the GST to 15 per cent so as to raise an estimated extra $27 billion to help the poor, made ‘fair’ by boosting welfare payments.

Nowhere in the report was it suggested that cuts be made in government spending.

In a recent newspaper column, former treasurer Peter Costello has labelled the Liberal MPs advocating for 50 per cent increase in the GST, as hotheads, and warned Mr Turnbull against such an increase to the next federal election.

Mr Costello said a GST increase would swamp every other election issue and urged caution about targeting superannuation tax concessions.

“The coalition is flirting with higher tax on superannuation.

“The longer it does, the more it will give ground to Labor on the issue.”

Clearly, Mr Costello is challenging the political wisdom of allowing everything to remain ‘on the table’.

Is it too facetious to suggest the Grattan Institute, a recipient of $30 million of taxpayers’ funds, should share in this unfair largess by distributing, say, $20 million of that amount to privately funded think tanks such as the Institute of Public Affairs, the Centre of Independent Studies, and the Brisbane based Australian Institute for Progress?

That would be real fairness.