Grants helping innovators to reach the next level 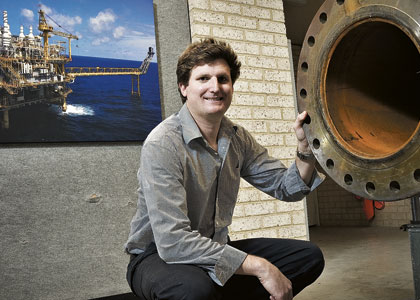 Late last month, the Canning Vale-based company was awarded $1.5 million for the early-stage commercialisation of its Drill-Smart product, which combines five patented innovations into a suite of drilling instrumentation designed to simplify operations.

“We have individual components already, so we are doing it in stages,” Mr Hejleh said.

“The final one which will have all the bells and whistles with the Satnav and the GPS and satellite communication from the rig will be due in 2014.”

Mr Hejleh said potential customers with whom he spoke at the recent Diggers and Dealers conference in Kalgoorlie were eager to try the product.

“We have employed about five people since the grant was approved, so we can get on with it and get it done on time. The grant enabled us to do that,” he said.

“This is very good because R&D is very hard yakka and if you are not a $100 million company it’s a very tough deal without those kinds of programs.”

Globaltech previously received a grant of more than $235,000 to settle on a proof of concept for its ePLOD product, a handheld tool drillers can use to automatically file drilling data.

The grant system proved vital for Industrial Composite Contractors, which received $450,000 in early 2011 to hire an experienced business development manager, and to finalise the proof of concept for its products.

ICC has developed two proprietary solutions – Site Jacket, which can protect oil and gas infrastructure from corrosion, and Technowrap, which is a pipe repair technology.

ICC chief executive Michael Mansell told WA Business News the company had recently entered into a joint venture with a Scottish company to market Technowrap in the Asia Pacific region.

“The applied funds went into pipe repair technology and that technology for the oil and gas sector eventuated in us forming a joint venture with an Aberdeen-based company called ICR Integrity,” Mr Mansell said.

“The JV is designed to service the pipe repair and secondary structural steel market within the oil and gas sector.

“The other proof-of-concept component of the grant was around validation of our Site Jacket solution, which are primarily used for pylons in either wharf environments or on oil and gas infrastructure.”

In recent weeks ICC submitted another application to Commercialisation Australia, this time to support the early commercialisation of its Sitefusion technology, which strengthens and repairs concrete structures.

The grant was matched by a capital raising by the ASX-listed company.

ABT launched the technology after more than four years’ development, during which time the brake system exceeded expectations and extended servicing intervals, giving operators at least two years between major services.

At the other end of the spectrum, software company iCetana was awarded $890,000 in March to advance the early-stage commercialisation of its video analytics application for CCTV security cameras.

The company, which was spun-out of Curtin University in 2010, uses its patented technology to detect behavioural anomalies through cameras in real-time and flag it with operators.

iCetana chief executive Gary Pennefather said the grant was helping push the technology overseas, and he was currently looking for more companies to implement its system in international sites.

“As part of our commercial strategy we work with some of the bigger players and partner with them, and we will go and install a system usually in one of the pre-existing sites that they have got and we will go to the site, set it up and run it and monitor it,” Mr Pennefather said.

He said the company already had sites in Europe and the US and was starting up activity in the UK, but he would not be drawn on specific customers.

“The market is made up of live monitoring surveillance with banks of screens and that tends to be the bigger more serious customers like governments who do city surveillance, transport authorities, university campuses, basically a lot of public scenes,” Mr Pennefather said.

“The other part of the market is where people just record stuff and hope to trawl back through it if an incident happens.

“We are really playing predominantly in that live space where we can be proactive, where we can show something to the operator who can see it and dispatch a guard or take some sort of action.”

Mr Pennefather said the problem with live monitoring was that there often were too many cameras to effectively monitor; to counter this, iCetana used a dedicated screen in a monitor bank to pick up unusual activity.

Another company spun out of Curtin is HiSeis, which is the commercial partner for the university’s Centre for High Definition Geophysics.

The technology uses computer algorithms to give a 3D map of the ore-body being studied and has been used by a number of miners including Panoramic Resources, Barrack Gold and Rio Tinto to study their mineral deposits.