A big population centre at Lake Argyle has been proposed by a Fremantle consultancy as the winning entry to an international competition. The objective was to balance the nation’s development with a northern capital. 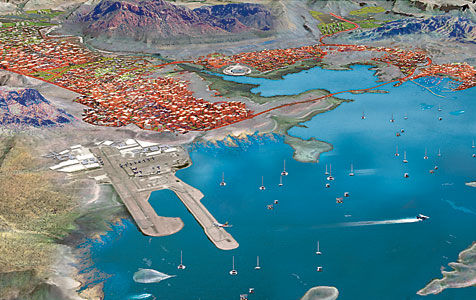 A big population centre is proposed at Lake Argyle to balance the nation’s development.

There has been no shortage of grand visions for Western Australia’s Kimberley region over the years.

There have been plans to cultivate its vast plains, dam its mighty rivers, and send its annual deluge south by canal. It was nearly home to Jewish people fleeing Europe in the middle of last century, and Baz Luhrmann shot most of the epic film Australia up there.

Most of these plans have come to naught. Those that have gone ahead have ended in failure or, at best, a spectacular reminder of what could have been.

Lake Argyle, which dams the Ord River in the east Kimberley, is one of the projects actually built. Since the 1970s, it has been WA’s quintessential white elephant. Only recently has the state started to recoup some of its original investment in the infrastructure that created this massive body of water.

This vast artificial water body is the central focus of yet another grand vision, this time focused on a major northern city – a dual national capital built on the shores of Argyle to propel development of northern Australia and truly help the country focus on Asia.

The idea for a ‘Northern Capital’, or ‘Australia’s Northern Eco City’ emerged from a long-running study by North Fremantle science, environment, planning and design consultancy ecoscape.

With this project, the firm, led by David Kaesehagen, recently won the $70,000 first prize in CAPITheticAL, an international competition to design a hypothetical Australian capital city as part of Canberra’s centenary celebrations.

The Lake Argyle city concept is bold, proposing a city of 150,000 to 200,000 people be built from scratch by 2050. It would be home to several new and important federal government bodies aimed at developing northern Australia and capitalising on the Asian Century. It would offer both population and economic diversification for the area, focus on new forms of agriculture and indigenous culture, and have a unique and distinct look and feel as a sustainable, lifestyle-oriented community.

Mr Kaesehagen said the idea came from good old-fashioned entrepreneurialism. He said it was developed over several years as the consultancy looked at ways it could diversify as the state’s boom appeared to be waning in the wake of the GFC.

The genesis of the concept was, Mr Kaesehagen said, derived from the state’s political leadership and talk of grand visions for WA’s rapidly expanding north.

“He was talking about Dubai-style stuff in northern WA. We wondered where we would put it.

“As a small business person where would we go?

“The GFC was starting and we were wondering what other things we should be into.”

Intriguingly, the visionary statements by the premier and others at the time resulted in far more watered-down policies to allow for modest growth, mainly in existing north-west towns.

One idea was the concept of the Pilbara City, which, at a target of 1 million people, was much more grandiose than ecoscape’s Lake Argyle proposition.

That exciting start resulted in the Pilbara Cities policy, which effectively allowed for Karratha and Port Hedland to grow to 50,000 people each, and other smaller towns to have similar expansion patterns. It was designed to win votes from the small population centres of the Pilbara without committing government to anything before reasonable town planning in a boom era.

WA Minister for Regional Development Brendon Grylls argues that the state government would have been laughed at if it had proposed to grow Karratha to 1 million people.

He said that the current growth in the Pilbara has been ahead of expectations, even if the numbers seem low to outsiders.

“On the ground it is pretty exciting.”

And, while Mr Grylls describes a major city next to Lake Argyle as blue sky, he notes that two of the most successful signature regional development projects have been the sustainable expansion of the Pilbara townships and the additional development of the Ord River irrigation project which is supplied by the Kimberley dam.

“I think it is blue sky stuff but, again, if you tried to pick, of your blue sky stuff, what was likely, (with) land, unlimited water and spectacular landscape you would be struggling within my lifetime to predict there would not be some sort of development,” he said.

Many of the arguments for the Pilbara City – the region is underpopulated, the labour pool is too small for existing industry, and the region needs to diversify – are echoed in the case for a city at Lake Argyle.

In addition, as Mr Grylls suggests, the east Kimberley has some major ingredients missing in the Pilbara such as water and, as a result, a viable agricultural sector which is positioned to expand.

Furthermore, the indigenous people of the area, the Miriuwung Gajerrong, have been amongst the most progressive in the nation in terms of striking deals that appear to be significantly raising the benchmark in terms of Aboriginal economic development.

They are believed to have a significant freehold footprint and have been active participants in the construction phase of the Ord River expansion. Arguably, this puts them in a better position to benefit from growth in the area, should it occur.

Mr Kaesehagen makes the observation that just 3 per cent of Australia’s population lives in the north of the continent, about half the nation’s total diaspora.

He notes there are historic precedents for this kind of rapid and significant development his firm is suggesting, even in our own state.

“We found one place with that kind of rapid population growth – the Goldfields,” Mr Kaesehagen said.

The population of WA leapt nearly fourfold to 200,000 in the 10 years between 1891 and 1901. Most of this growth was in the Goldfields, prompting massive infrastructure development to cater for temporary and permanent settlement of the area. That included railways, a water pipeline and cities such as Kalgoorlie.

“That was for gold,” Mr Kaesehagen said.

“What is gold? It is dreams of betterment of your lives.

“Australia is the new gold; that is where you can get a job and have an education and have a better life without being oppressed.”

While the Goldfields population boom of the late 19th century was partly driven by people escaping economic problems in the eastern colonies, there was also a large component of foreign immigration.

Immigration might be even more necessary to build a major city in the north, especially if there becomes a national imperative to populate the region.

“We can live up there, it is not a problem, it is just the way we think about it,” Mr Kaesehagen said.

“You might not get Australians going up there but you might have to take the American view that net immigration is a good thing for the country.”

“If Australians don’t live there I am sure [people in] other countries will think ‘we’ll live there instead’.”

Apart from these macro issues, ecoscape has looked at a more granular level, suggesting sustainable buildings built to a design that is different from the suburbia we have today. There is also specialist agriculture, including multi-level hydroponics, all of which is very futuristic and, ecoscape admits, potentially very expensive.

“We are not economists,” Mr Kaesehagen said.

One of the great virtues of Lake Argyle, according to ecoscape, is its artificial construction and lack of urban development. This blank canvas allows city construction to start from scratch, yet it would not affect a virgin landscape.

“I don’t know what the next step is,” Mr Kaesehagen said.

“We are just trying to push it out there and stimulate discussion.”