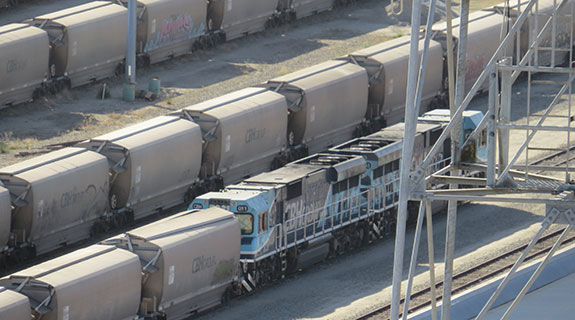 Sydney-based GrainCorp has emerged as a cornerstone investor in a bid to corporatise and list CBH Group, through a complex deal that would deliver up to $1 billion in cash plus shares in the listed entity to the 4,200 grain growers who own and control the 83-year old cooperative.

The Australian Grains Champion consortium is offering CBH members $600 million in upfront cash, with the potential for up to another $400 million if they cash in some of their shares before the listing.

The value of the shares wil be determined by the market, but based on CBH's earnings and valuation multiples applied to GrainCorp, it has been suggested CBH could have an enterprise value (debt plus equity) of about $3 billion.

GrainCorp will contribute up to $600 million to the deal, with half of that through notes and warrants that may be converted to equity, and a $300 million share option.

The ASX-listed comany said it was likely to become a significant minority investor in CBH if the deal is approved by CBH members.

GrainCorp and will be joined as a cornerstone investor by infrastructure manager Morrison & Co, which will subscribe to around $300 million in Grains Champion notes on behalf of a series of Australian superannuation investors.

CBH Group is the nation’s largest grain exporter, with 32 per cent market share, more than three times that of GrainCorp.

GrainCorp, which itself was formed from a series of state-based farmer cooperatives, has a market capitalisation of just under $2 billion, and claims the largest grain storage and transport network on the east coast.

One feature of the Grains Champion bid, according to the documentation it has released, is the continuation of majority grower ownership of the listed entity.

Another will be a reshaping of the current grain supply chain network, with Grains Champion planning to target what it called the premium market of January to May.

Grains Champion’s planned board includes two former CBH Group directors, Clancy Michael who served for six years including two as deputy chairman, and Samantha Tough, who was on the board for less than a year ending in 2014.

Business News reported speculation at the time that Ms Tough had left due to divisions on the board regarding the future of the company in a deregulated industry.

Ms Tough also serves on the board of Synergy.

Mr Michael called for CBH Group to enter Grains Champion’s process agreement and give farmers the opportunity to view and vote on the proposal.

“This is a considerable amount of money and its injection into the Western Australian grains industry will have significant positive effects for grain growers, regional communities and the state economy,” Mr Michael said.

“It is a once-in-a-lifetime opportunity for farming families, because investment of this scale is difficult to attract.

“Now is the time to protect CBH’s future, deliver an affordable network reshape strategy, equip CBH to be more competitive and unlock the equity growers have built in CBH.

“Australian Grains Champion has a five year growth plan for the business and is developing an affordable network reshape plan to deliver grain into premium price markets.”

Business News reported in January that CBH had announced a reduced net profit for its 2015 financial year (which runs to October), down by more than 44 per cent to $82.7 million.

The cooperative’s largest division, trading, was in the red to the tune of $17 million, while storage and handling earned about $100 million.

The report pinned the cooperative’s assets at $2.17 billion, and equity, mostly reserves, at $1.62 billion.

Earlier this week, three directors were re-elected by members in the lead up to the CBH annual general meeting.

In a release today, the board recommended growers take no action until the proposal was considered.

“At this meeting an unsolicited conditional, non-binding indicative proposal was presented.

“AGC’s proposal has been made to take control of all of the issued share capital of the cooperative.

“It is complex and highly conditional so will take several weeks to assess.

“The CBH board will always act in the best interest of Western Australian grain growers and will consider the proposal in this manner.”

WAFarmers grains council president Duncan Young said the proposal was still in very early days, although he noted that at a recent meeting of the council, it had reaffirmed its policy of supporting a cooperative model.

He said the council would review the proposal once released and make a decision at that point, with the decision ultimately something farmers will make for themselves.

Farmers would also have the commercialisation of similar cooperatives on the east coast and in South Australia on their minds when making a decision.

On the Grains Champion website, the company touts Wesfarmers and the Bega dairy cooperative, as two examples of successful commercialisations, while it highlighted fertiliser suppliers United Farmers and Ravensdown as two failed cooperatives.