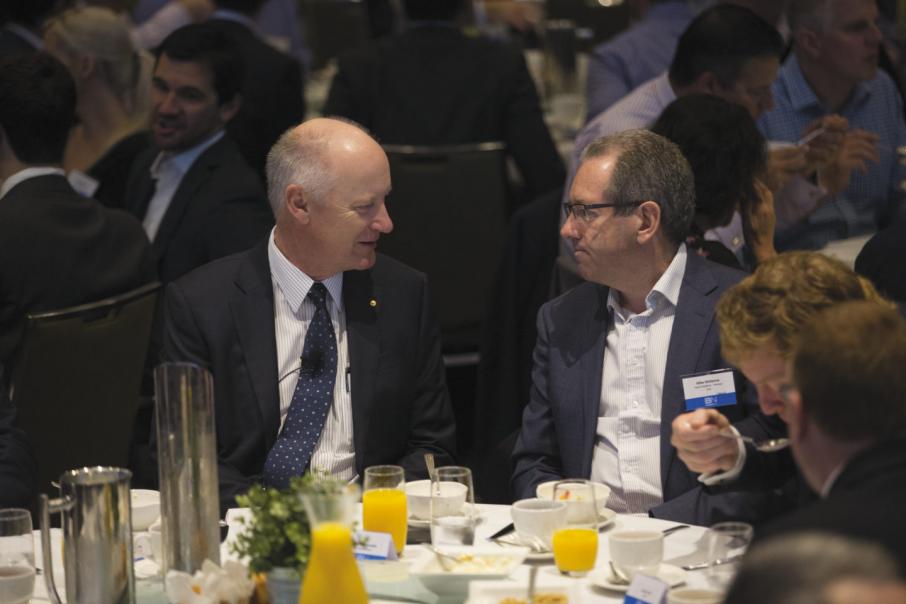 Lowering the company tax rate is the only policy proposed by either of Australia’s major parties likely to improve productivity and boost wages growth, according to Wesfarmers managing director Richard Goyder.

Speaking at this morning’s Business News Success & Leadership breakfast, Mr Goyder said wages growth, currently around 2 per cent per annum, was at least 1 percentage point below where it should be nationally.

“One of the issues we’ve got at the moment is that there hasn’t been enough wages growth in Australia, and the way you fix that is through higher economic growth and greater productivity,” he said.

“It’s very clear (a lower company tax rate) will lead to more investment, and a lot of the benefits of that will flow through to wage earners.

“There’s no other policy on the table at the moment that would have that consequence, I think.”

However, Mr Goyder said the tax rate would need to be lowered for all businesses, including big businesses, given the Senate recently split a company tax bill so it only applied to those businesses with turnover less than $10 million.

Mr Goyder said wages growth should be the priority question in every cabinet meeting for both state and federal governments.

That meant getting the climate right for business to make productive investments and innovations, which he said would drive wages growth.

It also meant allowing people to be creative and innovative, rather than discouraging them by penalising them for making mistakes.

“Business needs an environment that creates the desire to spend and take risks,” Mr Goyder told the Success & Leadership forum.

“The default position in government is to regulate, rather than let the market sort it out and let there be consequences.

“Right now in Coles (a subsidiary of Wesfarmers), we’ve got 16 federal government inquiries, nine state, and four from things like the Productivity Commission and ACCC.

“And that’s without all the other regulators that come into our business.

“(In) our last Coles board paper, I see someone comes in and tells us our meat slicer is blunt.”

He said he didn't want regulators wandering  around Bunnings in Western Australia on a Sunday telling employees they could not sell specific items, such as plastic mats.

Those onerous restrictions would make it more difficult for a bricks-and-mortar business such as Wesfarmers’ retail arm to compete with new technology, Mr Goyder said.

“We would just like a level playing field," he said.

“Do you think (online retailer) Amazon is going to look at their clock every day and say ‘it’s five minutes to eight in Perth so we can’t trade?’

“All I want is the capacity to operate our business the same way they and every other business is going to operate.

“Let us get on with it, let us employ local people.”

Nonetheless, Mr Goyder backed Wesfarmers’ ability to take on Amazon, due to its superior ground presence and big balance sheet.

“The Amazon (threat) has now been overblown and I take some responsibility for that,” Mr Goyder said.

“Good competitors make you sharper and make an industry more dynamic and creative.”

Optimism out west
Mr Goyder said he was fairly positive about where the WA economy was headed.

“Clearly the government has fiscal challenges and they need to be dealt with over time.

“Growth is the best answer to that, getting economic growth in WA and nationally should be a priority of all governments and businesses.”

Mr Goyder said he was encouraged when speaking to major mining companies about their investment plans at a recent Business Council of Australia meeting.

Other sectors he saw as having as-yet-unrealised potential were tertiary education, tourism in Margaret River and the Kimberley, and the innovation happening in agribusiness.

“We’re enriched with great natural assets, talented, well educated people, and we’re at the doorstep of one of the biggest growth economies in the world,” Mr Goyder said.