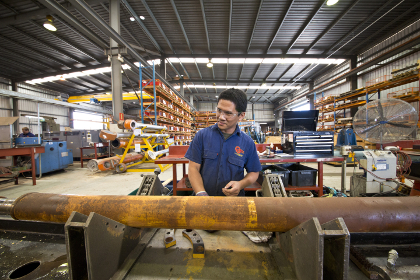 The nation’s peak industry group has applauded the federal government’s reinstatement of incentive payments for employers taking on first-year apprentices to engineering trades.

Nine engineering trades are now eligible for the $3,350 payments under the $57.5 million Kickstart initiative, including metal fabricator, pressure welder and toolmaker, in addition to the 30 building and construction trades already eligible.

Australian Industry Group chief executive Innes Willox said the payments, which will bring an extra 21,000 engineering and building apprentices into the workforce, were a welcome and necessary investment.

“Like many employers, engineering business are experiencing difficult trading conditions – exacerbated by the strong Australian dollar and ongoing structural adjustments. In this environment, employers are less able to take on more apprentices,” he said.

“Almost every sector of the economy utilises engineering skills in some way and underpins much of our economic growth – including in the resources sector. It is also a skills base that takes considerable developmental time and we need to ensure we maintain this pipeline of skills growth.”

Minister for Skills Chris Evans said the government was committed to boosting the number of Australians in apprenticeships.

Engineering trades were eligible for the Kickstart payments when they were introduced at the height of the global financial crisis in 2009 but apprenticeship commencements have failed to recover to pre-GFC levels, prompting the AIG to request that they be made eligible again.

The scheme runs until the end of February.