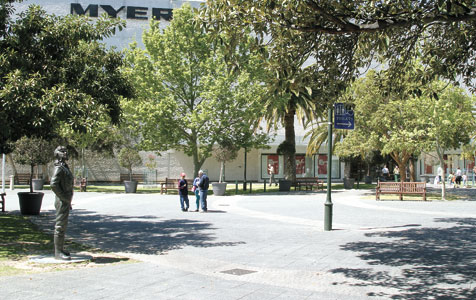 A redeveloped Kings Square in Fremantle had been earmarked as a new home for the Department of Housing.

Developer Sirona Capital says it will press on with plans to redevelop Kings Square in Fremantle, despite the state government seemingly backing out of a commitment to relocate the Department of Housing to the port city.

Finance Minister Dean Nalder told a budget estimates hearing on Tuesday that the Department of Housing wasn’t keen on moving to Fremantle, part of a 2012 proposal to relocate 80,000 square metres of office space out of the CBD.

The move would have shifted around 1,000 government employees to Fremantle, but Mr Nalder told the hearing that the financial fundamentals of the move had changed, with leasing costs in the CBD less expensive than they were previously.

Housing Minister Bill Marmion, however, said the Department of Housing was still committed to moving to Fremantle, provided the plan stacks up financially.

"I was at estimates hearings with the opposition last night and they chose not to ask me about this," Mr Marmion said.

"The fact is, there is a way to go yet and a decision has not been made.

"The government supports office decentralisation and is actively considering all options to achieve a significant presence in Fremantle.

"The key is doing so while delivering the best outcome for WA taxpayers and the local community."

Sirona managing director Matthew McNeilly said the developer’s plans for Kings Square would not be derailed, saying discussions with the state government to date had been positive.

“The success of the Kings Square project in Fremantle doesn’t hinge on one particular tenant, and although we would be pleased if the Department of Housing signed up as a tenant, we do have a number of options to pursue if this was not the case,” Mr McNeilly said.

Last week Mr McGowan claimed the Barnett government had walked away from another key plank of its office relocation plan, the relocation of the Department of Commerce to the City of Stirling.

When questioned in Parliament last week, Mr Nalder would not guarantee the plans would proceed, instead saying he needed finalised business cases to provide an accurate response.

“It’s clear now that this was an empty promise and one that (the Barnett government) never intended to deliver,” Mr McGowan said today.

“Once again, Colin Barnett’s reckless spending and out-of-control state debt have forced him to break another promise and the residents of Fremantle will now miss out on a huge boost to the local economy.”

“The community will have to rely on its own resources to come up with new ways to breathe new life into the local economy and create a more vibrant city centre,” Ms McGurk said.

“It’s clear they can’t rely on the state government to provide any practical assistance.”