The state government has signed a native title agreement with the Ngarluma people of the Pilbara over land intended for a deepwater port at Anketell Point. 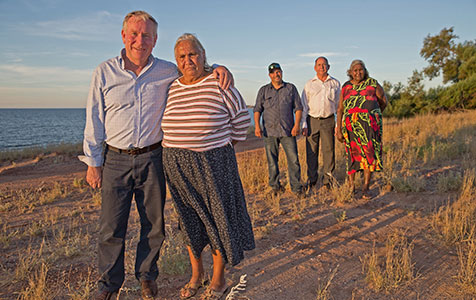 The state government has signed a native title agreement with the Ngarluma people of the Pilbara over land intended for a deepwater port at Anketell Point.

Premier Colin Barnett met with representatives of the Ngarluma community during a visit to the Pilbara today, where he also officially opened BHP Billiton's Jimblebar iron ore mine.

The agreement covers 4,300 hectares of coastal land about 30 kilometres east of Karratha and includes a settlement package of $20 million over nine years.

The package includes a combination of payments by the Department of Lands to the Ngarluma Aboriginal Corporation and a trust structure for the Ngarluma people.

“I congratulate the Ngarluma people for the commitment they have demonstrated throughout the negotiation process and I look forward to building on our strong relationship as this agreement progresses,” Mr Barnett said.

“This agreement was approved unanimously by the traditional owners and offers an opportunity for the Ngarluma people to continue their journey towards a sustainable and independent future.”

The premier is hopeful Chinese steel giant Baosteel will kickstart the stalled development of a multi-user deepwater port at Anktell Point, having recently held talks with the company's chairman in Beijing.

Baosteel holds a stake of just less than 20 per cent in Perth-based Aquila Resources, which is looking to develop the port in a joint venture with mining investment company American Metals and Coal International.

Mr Barnett told reporters earlier this month it was made clear to him that Baosteel had the endorsement of the Chinese government in its interest in the Anketell project.

“This is a significant project that will unlock the potential of the West Pilbara by allowing small and mid-sized iron ore companies, and potentially producers of other commodities, to gain access to valuable port space,” the premier said today.

“Once fully operational, Anketell’s capacity of at least 350 million tonnes per annum will be more than 20 per cent higher than total shipments out of Port Hedland in 2012-13.

“This native title agreement provides further certainty to a potential port builder and future users, and is imperative in ensuring that this site can be developed quickly as required.”

"We are pleased this settlement will lead to the creation of meaningful jobs for the Ngarluma people as well as the provision of a range of important community infrastructure," he said.

"The Ngarluma people have negotiated with the state in good faith, recognising the need to provide access for the development of a new port at Anketell, while making our case of the need to maintain our connection to our land, waterways, rivers and seas."

Mr Stenson said the agreement would facilitate new infrastructure at Roebourne, including a community centre and elders' village.

Construction of those facilities is expected to start later this year.