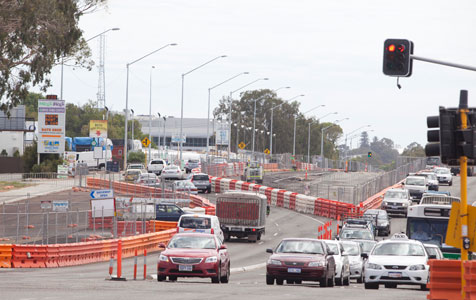 The state government will embark on a record infrastructure spend of almost $27 billion over the next four years, despite a deterioration of the state’s revenue base and warnings from credit agencies.

Treasurer Troy Buswell said the record $7.5 billion capital works spend in the 2013-14 budget represented a historic investment in transport infrastructure, with Main Roads and the Public Transport Authority accounting for a combined 22 per cent of the state’s asset investment program.

“To put this investment into perspective, it is the equivalent of four Mandurah-Perth railways,” Mr Buswell said.

“Our government is investing in the future by building long-term assets that will be enjoyed and used for years to come.”

The government has outlined $5.7 billion in transport infrastructure spending over the forward years, with $931 million going towards major election commitments including the MAX light rail project and the Perth airport rail link.

That figure falls well short of the combined $4.8 billion cost of the projects, with Mr Buswell pinning his hopes on private sector investment and funding from the Commonwealth government to account for the remainder of the costs.

Major roadworks expenditure for 2013-14 includes $103 million towards road safety and urgent minor works projects, $61 million towards upgrades to Kwinana Freeway and $46 million to complete the Stage 2 upgrade of the Esperance Port Access Corridor.

The government is forecast to spend a combined $4.2 billion on health and education, with strong population growth driving demand for hospitals and schools.

The $1.1 billion in health spending for 2013-14 includes $417 million in funding towards the New Children’s Hospital, $146 million towards the new Midland Public Hospital and $108 million to complete construction at the Fiona Stanley Hospital.

A further $904 million in 2013-14 will go towards social and affordable housing, including $171 million on residential land acquisition to enable new projects to be delivered.