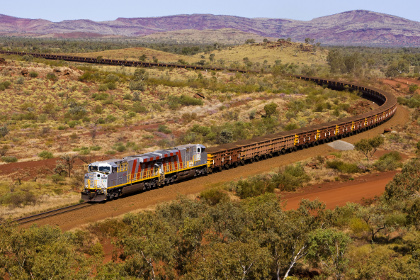 The state government will support QR National and Atlas Iron's bid for a common rail line in the Pilbara, but says it won't put any money towards it.

Premier Colin Barnett told reporters his government "in principle" supported any rail network to link mining projects in the state's northwest, but said they would have to be self-funded.

"It's a project that's been talked about for along time," Mr Barnett said.

"The state government would be, in principle, in support of this to be able to have a common user rail system that services different companies, different mines.

The premier said rail operator QR National had talked to him "several times" about the proposal, as it would need a state agreement to go ahead.

Atlas and  QR National confirmed this morning they were examining the possible construction of a $3.5 billion railway linking mines in the Pilbara to Port Hedland, a move which could be a game changer for the iron ore industry.

Atlas announced today it had entered a binding memorandum of understanding with QR to conduct a feasibility study into the line's construction and the project could be completed by 2015.

Atlas and QR National will share the costs of the study, and a potential development agreement would likely involve Atlas being a foundation customer of the railway.

Neither Atlas nor QR put a dollar figure on the cost of the rail project, but it is believed the development could cost up to $3.5 billion.

QR National's executive vice president of strategy and business development Ken Lewsey said Atlas and QR National had been working informally on the proposal since 2011.

"Both companies have reached a position where a formal agreement to further explore the opportunity is appropriate in taking it to the next stage."

But the railway would be developed on the basis of other miners connecting and accessing it through staged development, QR National said.

"The potential development of an independent Pilbara rail network could represent a paradigm shift for the progressive development of the Pilbara, breaking open long-standing barriers to new entrants to the iron ore industry," Atlas Iron managing director Ken Brinsden said.

Atlas said rail haulage would form part of its strategy to grow production from 15 million tonnes per annum (mtpa) to as much as 46 mtpa.

Mr Brinsden said the company had examined all of its possible rail options, and said the agreement with QR was one of the best outcomes for shareholders.

“We believe an independent railway offers Atlas a highly attractive means of growing its production to as much as 46Mtpa, enabling the Company to realise the immense value of its one billion-tonne resource inventory and extensive port capacity,” Mr Brinsden said.

“This represents the start of the next leg of Atlas’ remarkable growth journey and we look forward to examining the economic and technical aspects of the proposed project.”