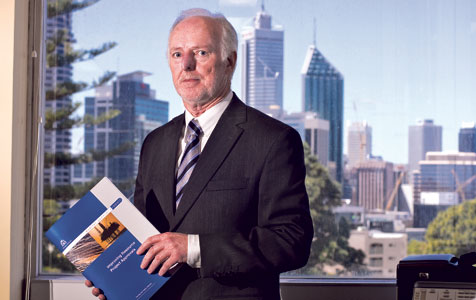 Western Australia’s Auditor General says the Barnett government’s office consolidation plan is not providing maximum benefits to the state, because the strategy covers less than half of WA's government agencies.

The state government launched its plan to consolidate office space in 2010, with the move of 5,000 public servants from 18 locations and 23 agencies into new facilities in Perth, West Perth, East Perth and Osborne Park.

In July last year, then-Finance Minister Simon O’Brien extended the initiative to regional areas, with Mandurah, Busselton and Northam the first country towns to be included in the cost-saving initiative.

The cost savings from relocating government departments from the CBD to suburban areas are estimated to total $165 million over the next 15 years.

Auditor General Colin Murphy today released a report in Parliament that said genuine improvements had been made as a result of the moves, but the total size, cost and density rates of government office space were not known.

“This restricted mandate and lack of baseline information limits government’s ability to plan and organise its accommodation arrangements in a way that delivers maximum benefit from government’s 2009 Works Reform program,” Mr Murphy said.

Mr Murphy said the government had made a solid start in implementing recommendations from his 2006 report into office accommodation, including the key initiative to establish a whole-of-government approach.

He said the Department of Finance was working to address the constraints that have acted as a roadblock to applying the scheme across all government sectors.

“I am encouraged that the Department of Finance is seeking to address those constraints, and has plans to realise more of the benefits I identified in 2006,” Mr Murphy said.

“Those benefits are still available, and government would be more likely to realise them if all agencies focus on the bigger picture.”