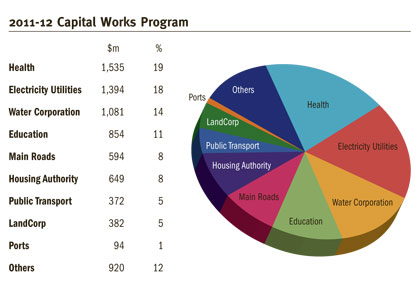 There is only one real certainty when it comes to infrastructure spending – that the government of the day will spend more money every year but still not satisfy the demands of the community.

Whatever priorities the government sets, there will always be calls for more spending, whether on roads, hospitals, railways, or schools.

Western Australia’s rapid growth is only adding to the demands for more infrastructure spending.

The hard bit is knowing which projects are going to get the nod.

The demand for extra infrastructure spending in WA is driven by both overall population growth and major resources projects.

The state’s population grew 2.6 per cent last year, the fastest of any state in the country. That is reflected most clearly in congested freeways and crowded trains.

The big resources projects that are driving the state’s growth also require more spending, on things like ports, railways and electricity transmission.

Adding to the pressure is the community’s desire to see a ‘dividend from the boom’. A new football stadium, maybe a new museum, something special to mark this extraordinary period in the state’s history.

While demand for infrastructure is on the rise, the government is financially constrained, partly for reasons of its own making.

In particular, the Royalties for Regions program means that a big chunk of mining royalties are earmarked for regional projects (see Sophisticated approach a challenge for the allocation of Royalties' big budget).

For every dollar that goes into the $1.2 billion Pilbara Cities program, or the expansion of the Ord River irrigation project, or the Super Towns program, or myriad other regional schemes, there is one less dollar for projects in Perth.

That is layered on top of general budget pressure – the Grants Commission process has cut WA’s share of GST grants, the weak property market has reduced growth in stamp duty and, all the while, recurrent spending continues to expand.

Against this backdrop, the state government has budgeted to spend a record $7.9 billion on capital works projects this financial year, and slightly more next financial year.

This spending is concentrated in just a handful of portfolios. Health, electricity and water account for half the total. Education, roads and public housing make up another quarter (see pie chart above).

Much of this spending is using borrowed money, which explains why state government debt has risen to record levels and is projected to rise further.

And that is why state treasurer Christian Porter has foreshadowed cutbacks next financial year, with spending on some projects expected to be deferred.

While the state is suffering from cuts in GST grants, it will be looking to Canberra to make further contributions to specific infrastructure projects.

The complex and overlapping grants system that has evolved in Australia means that Canberra contributes to many capital works projects in WA, particularly road and rail projects.

The largest federal contributions have been for big-ticket projects, such as the CityLink development in Northbridge, the Ord-East Kimberley development and the upgrade of WA’s grain freight network.

Federal funding decisions draw on the work of advisory body Infrastructure Australia, which has been evaluating funding requests for several other WA projects, including the $1 billion Gateway WA roads project.

In addition to all of the government-funded infrastructure projects under way across the state, the private sector is spending record amounts to meet its own infrastructure needs.

This is concentrated in the Pilbara, where mining giants such as BHP Billiton, Rio Tinto, Fortescue Metals and Hancock Prospecting are making multi-billion dollar investments in railways, roads, airstrips, power stations and desalination plants.

The private sector is also funding most of the upgrades to port infrastructure around the state, through user charges at places like Port Hedland, Geraldton and Esperance (see Ports progress in stages points to an oresome outcome).

In addition, the state government has tapped into the private sector for a handful of public private partnerships.

And the Capella Parking consortium, led by Capella Capital, will fund, build and operate the $140 million multi-storey car park at the QEII Medical Centre.

Another public private partnership in the works is the Eastern Goldfields Regional Prison. Three private consortia have been short-listed to design, build, finance and maintain the 350-bed prison.

With mounting state debt, the government will be sorely tempted to look more positively on further public private partnerships.

Premier Colin Barnett has been the main driver of WA’s infrastructure priorities over the past four years, subject to the very big qualifier of fitting in Royalties for Regions projects.

Over that time, there have been major changes, as depicted in the attached graphic (see Changing Priorities).

Mr Barnett started by cancelling three of Labor’s favoured projects – a new football stadium at Subiaco, a new museum at the old East Perth power station and the ‘Dubai on Swan’ waterfront project.

He also sat on the state infrastructure strategy that was commissioned by Labor and put together by a taskforce chaired by former Clough boss Brian Hewitt.

Mr Barnett’s failure to release the strategy paper has been a bugbear of WA’s major business groups ever since, so it was interesting to see Opposition leader Mark McGowan announce this week that a future Labor government would develop a 20-year infrastructure strategy.

Mr McGowan also pledged to establish an advisory body called Infrastructure WA, which would be chaired by a prominent local citizens and include private sector representatives.

He said it would be an “apolitical, bipartisan” group.

“That allows ... the business community who want to invest to actually see what the expectation is in terms of infrastructure over the next couple of decades,” Mr McGowan told a business briefing in Perth.
Chamber of Commerce and Industry of WA chief executive James Pearson welcomed Labor’s plan.

“This allows for decision-making to be more transparent, ensures that infrastructure funding is allocated to projects that will deliver the greatest long-term benefit and provides more certainty to the private sector on the priorities and timing of investments by government,” Mr Pearson said.

That endorsement evidently did nothing to sway Mr Barnett, who dismissed Labor’s plan as gloss. “This government doesn’t do that, we actually get on and make decisions and build projects,” he told reporters. “It’s so much Labor: set up new bodies, new organisations, new committees, lots of plans, lots of glossy documents but not much action.”

Mr Barnett has endeavoured to make rapid progress on major projects but, in several notable cases, has hit roadblocks.

For instance, he repeatedly touted the Oakajee port development as the state’s most important project but it has failed to proceed, despite promises of state and federal funding.

He also touted the selection of the James Price Point LNG hub as a breakthrough that would pave the way for Browse Basin gas developments but that project is mired in controversy and just been postponed.

The Barnett government’s major achievements include the expansion of the Ord River irrigation area, the go-ahead of the CityLink project in Northbridge and the approval of the Mid West Energy project, which will extend high voltage transmission lines from Perth to Eneabba.

The challenges involved in getting major infrastructure projects under way are illustrated by looking at the top six priorities listed by Mr Barnett in February last year.

The Ord irrigation expansion is proceeding, albeit with help from previous governments that worked hard to settle contentious native title issues.

Planning for a major football stadium is proceeding, though doubts remain about the cost and suitability of the premier’s preferred site at Burswood.

The Oakajee project has stalled, the James Price Point LNG hub has been postponed and the Perdaman urea project at Collie is effectively on hold because of commercial disputes.

The sixth project, and the most curious of them all, is the proposed construction of a gas pipeline from Bunbury to Albany.

Planning work is proceeding but with no apparent interest from private sector customers.

With industrial projects proving to be hard work and an election getting closer, Mr Barnett changed his tone when he outlined the government’s agenda for the coming year.

He talked up progress on the Burswood stadium and otherwise highlighted community infrastructure, such as new hospitals, more trains, extra schools, and civic projects like CityLink and the revised Waterfront development.

The next major infrastructure project likely to proceed is Gateway WA, which will improve the road network around Perth airport.

Other prospective projects range from a new WA Museum in Northbridge to a light rail system in Perth’s northern suburbs and new hospitals at Midland and Karratha.

That leaves several key pressure points, including the privately owned Perth Airport, which is in the midst of a major upgrade after long being criticised for poor standards.

Perth’s freight network, particularly between Fremantle and the Kewdale area, is another concern for business groups (see Road, rail plans to cope with freight growth).

The state of the energy transmission network is also a concern, not just in the South West but also the Mid West and the Pilbara.

Bunbury port is also seen as a problem area, with further upgrades needed for roads and rail services into the area.