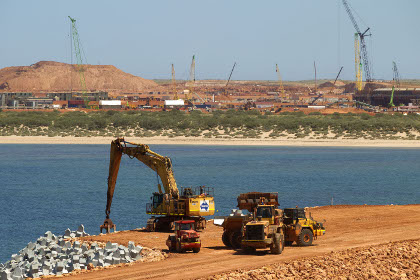 Chevron's $43 billion Gorgon LNG project is proceeding on budget and on track for completion by the end of 2014, the project director said today.

“We’ve got a good handle on it,” Gorgon general manager Colin Beckett said today during a tour of the site.

“We are meeting our milestones."

The project workforce on Barrow Island has grown to 3,300 as work proceeds on the development and is due ton peak at about 5,000 next year.

“We’re firing on all fronts at the moment," Mr Beckett said

He explained that some contracts on the giant project had been rescheduled but none of these were critical to the project timeline.

Mr Beckett highlighted two contracts that were critical to the timeline – a civil underground contract currently being undertaken by Leighton Contractors, to be followed by a mechanical, electrical and instrumentation contract awarded to a CBI Kentz joint venture.

He said it was critical to ensure all contractors coordinated their work, and felt confident this could be achieved.

“The key thing is organisational capability," he said. "We’ve assembled a first class team of people."

Mr Beckett also said he was pleased with the amount of work going to Australian suppliers, with local content likely to be “north of 50 per cent”.

“I think we’ve done quite well, even on fabrication."

This followed criticism by steel fabricators, arguing they were not geting their fair share of contracts on Gorgon and other big projects.

Mr Beckett said Chevron was continuing to evaluate the construction of a fourth LNG production train, in addition to the three currently under development.

Engineering contractors KBR and a JP Kenny–Technip joint venture were due to complete pre-FEED studies this year, on the downstream and upstream components respectively.

Mr Beckett said the train four development would include a second trunkline and new gas fields, and would cost north of $10 billion.

A fifth LNG train is also part of Chevron's long-term plan for Gorgon, but Mr Beckett said the company would probably wait until it had a production track record with the initial four trains before evaluating a fifth.