Gomboc gains another year with Sculpture by the Sea

As the only artist to claim a space at Cottesloe’s Sculpture by the Sea for each of the event’s 14 exhibitions, Ratimir Marijan (Ron) Gomboc has created his largest sculpture yet for the seaside display. 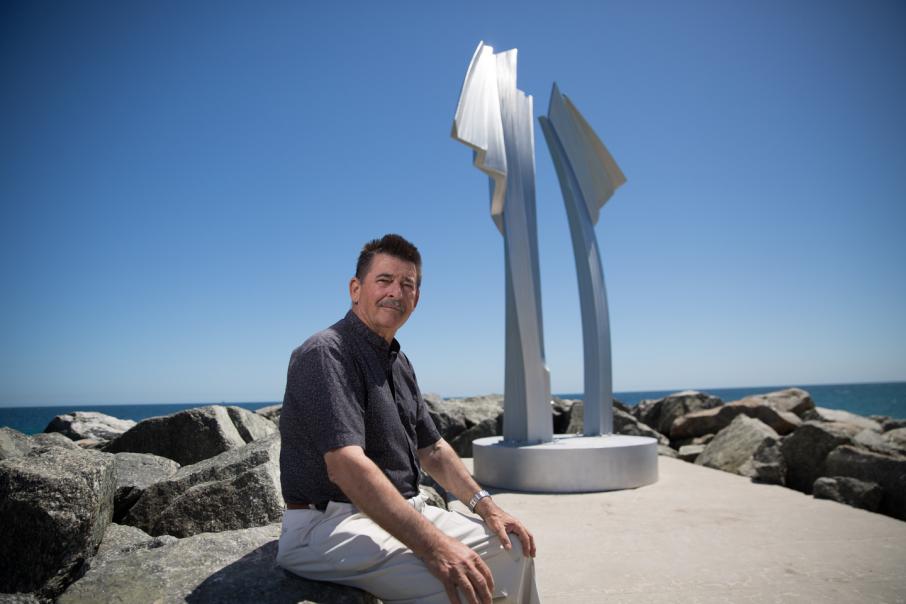 Ron Gomboc says Sculpture by the Sea has created vast public awareness for the art of sculpting. Photo: Attila Csaszar

As the only artist to claim a space at Cottesloe’s Sculpture by the Sea for each of the event’s 14 exhibitions, Ratimir Marijan (Ron) Gomboc has created his largest sculpture yet for the seaside display.

The Elder, comprised of two pieces made from marine-grade reflective brushed aluminium, represents an elderly figure and a youthful person.

The larger of the two segments is more than five metres tall.

“Fortune favours those that are a bit more daring and this year’s sculpture is the biggest one yet,” Mr Gomboc told Business News.

He said the sculpture told a story about the relationship between younger and older generations and learnings that could be passed on, if youth chose to listen – despite younger generations needing to learn things for themselves.

“Elders have been in all the generations, no matter where you come from you have the wisdom and advice of the elder,” Mr Gomboc said.

“Most of my work has to tell a story … my work relates to relationships and the cycle of life and the spiritual side of being.”

Born in Slovenia, Mr Gomboc migrated to Western Australia as a child and said he had been a sculptor since graduating from the Claremont School of Arts in the 1970s.

“The good thing about the sculpture park is over a period of time since 1980 we have continuously tried to upgrade it to create more sculpture platforms,” Mr Gomboc said.

He said each year Sculpture by the Sea brought a wave of sculptures from all around the world to WA.

“We have sculptures that stay with us on consignment from Sculpture by the Sea where we split commission, if we sell it,” he said.

“We have artworks here from as far as Denmark, from China, Japan, Korea, from France, and local artists as well.

“If I get a commission from Fortescue or other private buyers, whatever money I get from a commission goes back into running the gallery.”

Mr Gomboc said he had witnessed Sculpture by the Sea evolve over the years, influenced by progressive cultural ties with Asia.

“It’s always been a very good selection of international, national and local artists; now there’s a strong component from Asia, Japan especially, and then China,” he said.

“He made so much public awareness,” he said.

“Where people who used to collect paintings would say, ‘all our walls are full,’ now they might say ‘oh, we’ve got a property down south, maybe we’ll buy a sculpture and put it there’.”