Looking across both mergers and acquisitions (M&A) and equity capital markets (ECM), Goldman Sachs topped the league tables for 2018.

It advised on six corporate finance transactions during the year, worth a total of $24.5 billion.

In value terms that put it just ahead of Macquarie Capital, which advised on 11 transactions worth $21.6 billion.

Other corporate advisory firms that ranked high on the league tables included Gresham and UBS.

Herbert Smith Freehills was the standout among the law firms, advising on 20 transactions worth $24.8 billion.

It was followed by King &  Wood Mallesons, which advised on 11 transactions worth $8.3 billion.

That typically means one of the counterparties, or its assets, are based in WA, or the person leading the advisory team is based in Perth.

The top end of the league tables has been influenced, as always, by a handful of very large transactions.

These include Wesfarmers’ demerger of its Coles business and Santos buying Quadrant Energy – both of which involved multiple corporate advisers and law firms (detailed below).

The deal value was boosted by its work on Silver Lake Resources’ merger with Doray Minerals, and the SRG Global merger.

In terms of deal numbers, Sternship was broadly on par with several other Perth-based advisory firms, including Argonaut, PCF Capital and Azure Capital.

Among the law firms, Gilbert + Tobin was one of the busiest last year, working on 13 M&A transactions and 21 ECM deals.

Johnson Winter & Slattery also had a good year, helped by the presence of corporate partners Paul Vinci and Justin Harris, who transferred from Clifford Chance in mid 2017.

Steinepreis Paganin continued to be by far the most prolific corporate law firm in Perth, advising on 68 capital raisings and 15 M&A deals.

The average value of its capital raisings was $6.6 million, reflecting its focus on the smaller end of the market. 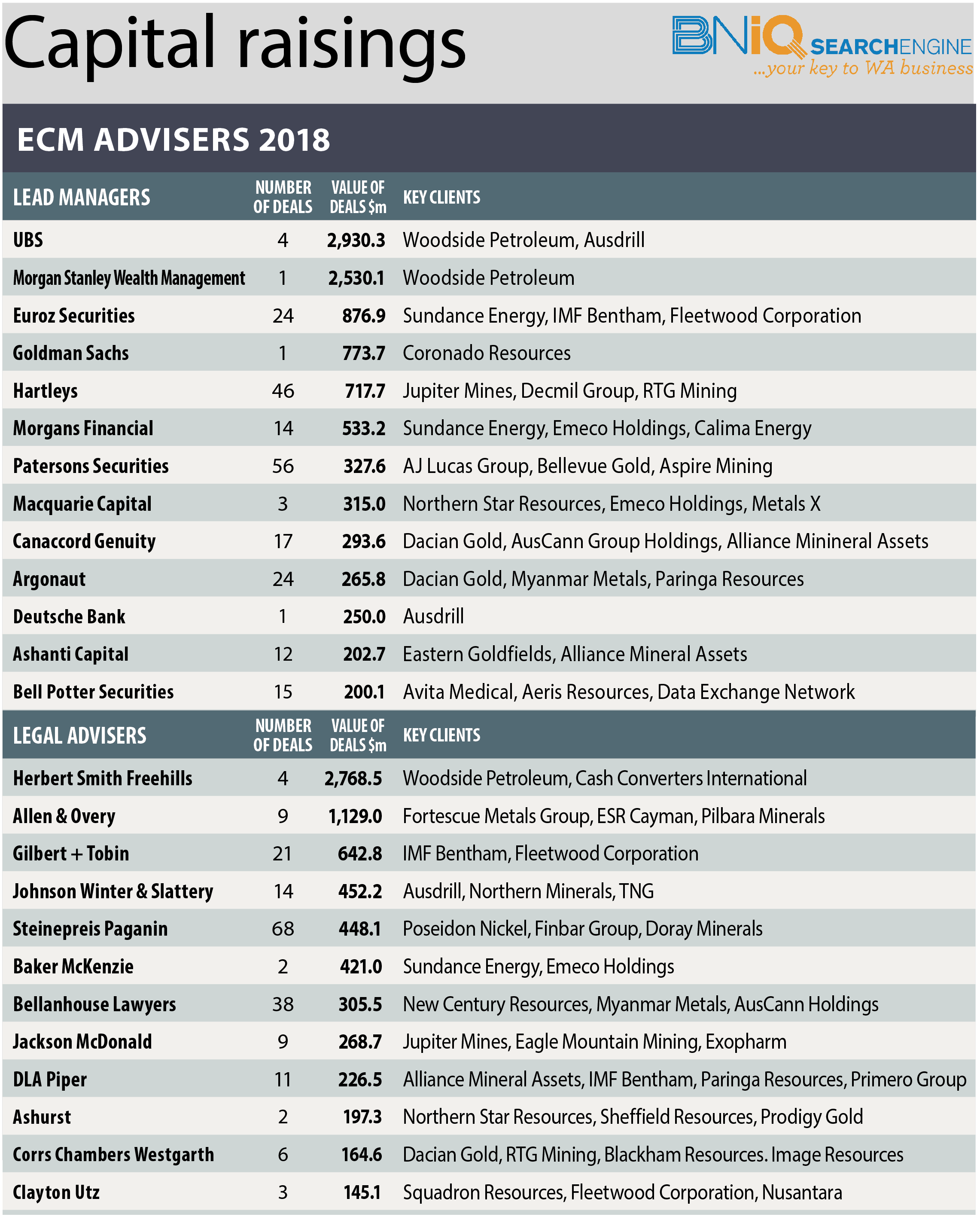 More revealing for the local market was the competition between Perth-based broking firms.

Euroz Securities had a lead role on 24 transactions that raised a total of $876 million, with Sundance Energy and IMF Bentham being its most valuable clients.

Euroz finished the year ahead of rival broking firm Hartleys, which had a lead role on 46 transactions worth $718 million.

These included the IPO of Jupiter Mines and raisings for Decmil Group and RTG Mining. 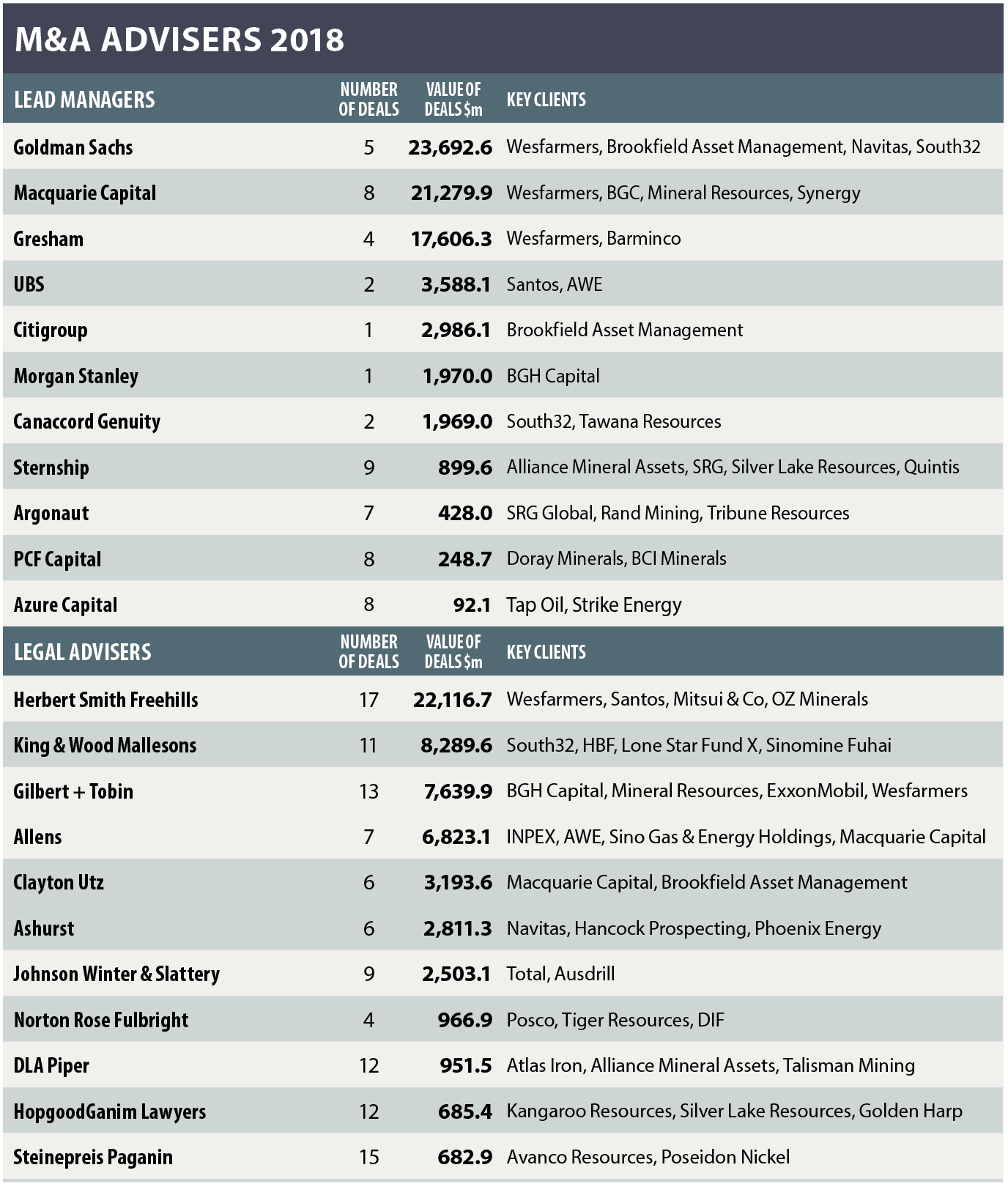 The lead advisers were based on the east coast, with the HSF team, for instance, led by Baden Furphy in Melbourne.

HSF’s Perth-based corporate partner, David Gray, and his team assisted on the deal, while Perth-based litigation partner Liz Macknay had a lead role on the court hearings for the demerger scheme.

A second large transaction was Santos’s acquisition of Perth-based Quadrant Energy, which involved even more advisers.

Three financial advisers and four law firms were involved on the sell side, with most of the work done on the east coast.

Among the law firms, Clayton Utz was the main adviser to the selling consortium, while King & Wood Mallesons and Allens had secondary roles advising Brookfield and Macquarie respectively.

The BGH consortium, which also included Australian Super and Navitas founder Rod Jones, proposed a takeover pitched at $5.50 per share, valuing the target at $1.97 billion.

That was rejected by the Navitas board, which was advised by Goldman Sachs and Ashurst.

Their strong stance paid off when the BGH consortium, which was advised by Morgan Stanley and Gilbert + Tobin, came back early this month with an improved proposal.

Pitched at $5.83 per share or $2.1 billion in total, the new proposal has been endorsed by the target’s board.

The largest acquisition by a WA company last year was South32’s purchase of the remaining 83 per cent stake it did not already own in US company Arizona Mining.

Goldman’s Perth-based managing director, Peter Watson, who heads the firm’s Australian mining practice, had a lead role on the takeover.

Mr Watson’s mining expertise was also reflected in his role as lead adviser on the $774 million initial public offering of Brisbane-based Coronado Global Resources, which has coal mines in Queensland and the US.

Some notable in-market deals were also transacted during the past year.

These included Hancock Prospecting’s acquisition of Atlas Iron after a contested three-way tussle, and Ausdrill’s friendly merger with Barminco. 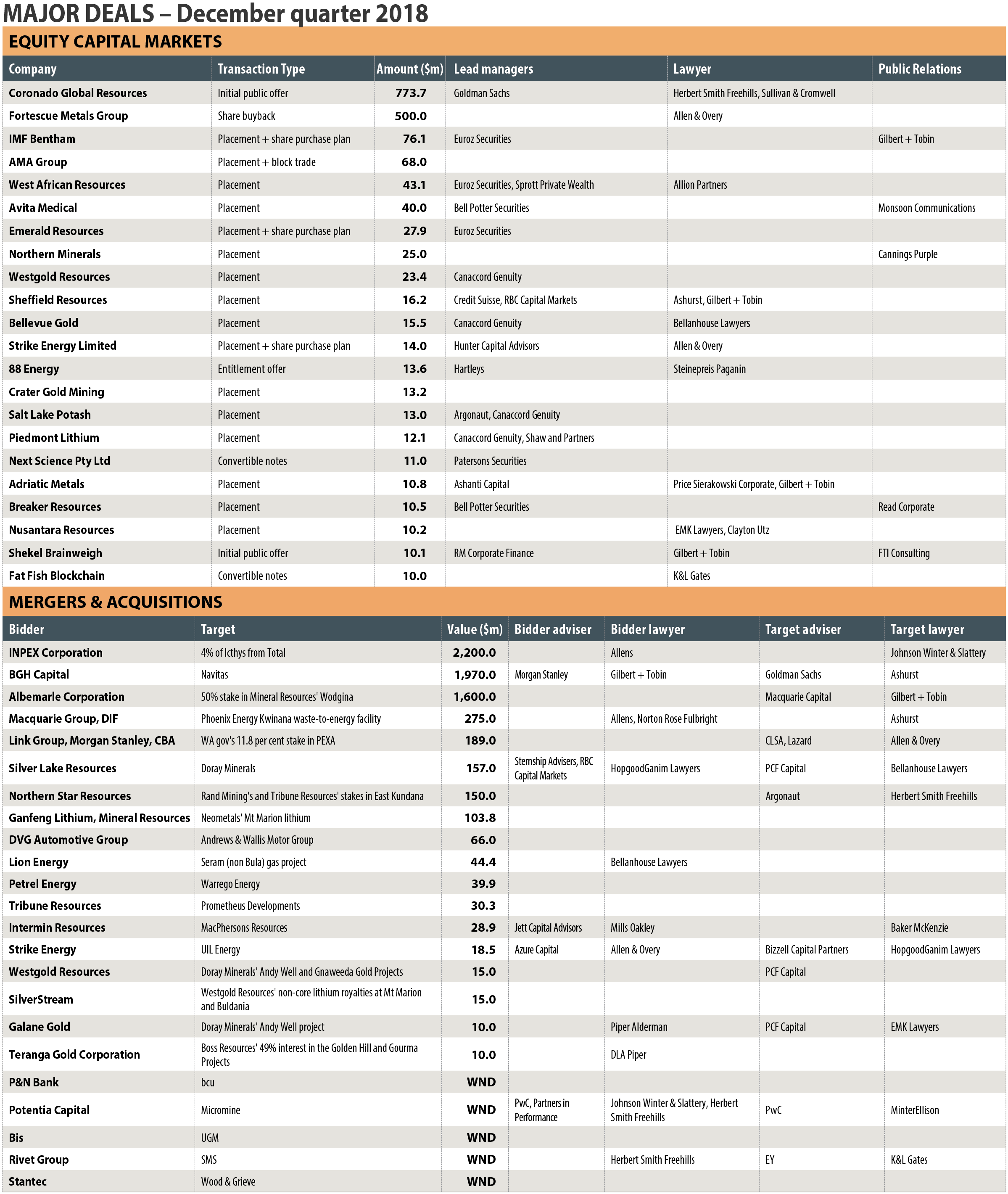 Herbert Smith Freehills head of corporate Simon Reed said his firm had a strong year in 2018, and attributed this to the longstanding relationships his team has across the business community in WA.

“There was a good contribution across all of the key sectors in the WA market,” he said.

“Hard rock and mining are still playing a strong part and there was sensible transacting in the energy sector.”

Mr Reed said the expected growth in capital projects in sectors such as LNG, iron ore and lithium, was likely to spark more corporate activity among businesses servicing the projects.

“That has led to, and will continue to lead to, a fair bit of activity in the services sector, which has come through a pretty challenging period,” he said.

“There are groups that have indicated they are preparing for sale or seeing opportunities in that sector.

“There will be more attractive M&A opportunities in that sector.”

“That tells you that M&A market is becoming healthier,” he said.

“That’s the environment where deal returns are enhanced and deal strategy becomes integral.

“You need to think carefully about the potential for counter bidders, which in recent years hasn’t eventuated in many circumstances.

“If that continues into 2019, shareholders will be much better for it.”

The McGowan government’s modest privatisation agenda has delivered some work to advisory firms, including Investec and Herbert Smith Freehills.

It’s been very modest compared with the big deals the Barnett government had been pursuing, including the partial sale of Western Power and the sale of ports.

Investec has arguably been the main winner, picking up several contracts on the planned sale of TAB and Landgate’s automated land titling functions and title searches.

Investec signed a $495,000 contract in December to advise on the TAB sale, after previously providing strategic advice on options for the government.

In August, it signed a $528,000 contract to advise on Landgate sale options and has subsequently been appointed to manage the expressions of interest process, currently under way.

Its success fee will be a percentage of the final sale price.

The government has agreed to sell Landgate’s automated land titling functions and title searches, which is its core  business.

In addition, the government is planning to sell Landgate’s 78 per cent stake in IT company Advara, which counts Landgate as its major client.

The stake was held through Landgate.

Investment bank Lazard was paid $220,000 to advise on the dual-track sale process.

Another notable government deal was the sale of Synergy’s renewable energy portfolio into a new entity – Bright Energy Investments.

Dutch investment company DIF and Australian industry fund Cbus Super each acquired a 40 per cent stake in Bright, with Synergy holding the balance.

The new venture has subsequently committed to construction of the new Warradarge wind farm, which will have a 180-megawatt capacity.

It also owns the Greenough River solar farm and the Albany wind farm.

Advisers to Synergy were Macquarie Capital and Herbert Smith Freehills, with Lazard having a more limited role advising the Synergy board, while Ironstone Capital Partners and King & Wood Mallesons advised the new investors.